The Blueprint - Faber vs. Barao 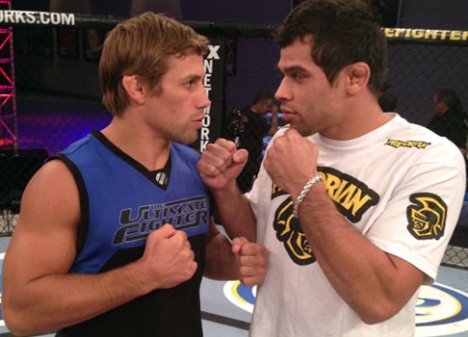 Urijah Faber isn’t the UFC Bantamweight Champion. Yet, it is undeniable that the “California Kid” is the most famous 135-pound mixed martial artist in America—period.

The Sacramento product with the million-dollar smile and elite skills was the face of the WEC for the three years leading up to the decision by Zuffa to fold the fledgling promotion into the UFC. He has probably signed thousands of autographs during and after his reign as the WEC featherweight champ. His five successful defenses remains a WEC record.

Faber has used his star power to successfully market himself like no other bantamweight in domestic MMA history. The net result is a burgeoning business empire in his home city and, of course, regular headliner status on fight cards, which means big checks for strapping on the gloves and fighting.

Renan Barao doesn’t have any of that. He isn’t famous. Not in the US, at least. He hasn’t parlayed his athletic career into a diverse stream of business revenue. In fact, I’ll bet that most casual UFC fans don’t even recognize his name.

I’m sure Barao doesn’t care much. Why? His current 31-fight unbeaten streak is one of the longest in the history of the sport, and definitely the longest active unbeaten streak among the UFC’s current roster of fighters. That makes him the hottest fighter in the UFC, if not the planet.

The two will face off in Saturday night’s main event for the interim UFC Bantamweight Championship. It’s a matchup that came about when reigning champion Dominick Cruz suffered a severe knee injury while training to defend his title for a second time against Faber.

Cruz will face the winner in his next bout, assuming he heals and returns to action in a reasonable time period.

Most will probably find this shocking, particularly since Barao is a late replacement opponent for Faber, but the Brazilian is a healthy favorite according to most online oddsmakers. In other words, UFC President Dana White didn’t give the hugely popular Faber a free pass to the title. He arguably handed him the best fighter in the world who doesn’t currently hold a UFC title.

Thanks, Boss. I’m sure those were Faber’s first thoughts, when he learned of his new opponent.

Make no mistake about it, however. Faber is a true champion. This guy isn’t afraid to fight anyone, including Barao. He has unbreakable confidence in his own abilities, and he surrounds himself with an amazing team of trainers and training partners to make sure that he is fully prepared for whomever he faces in combat.

Faber will probably approach this fight a little differently than in recent bouts. He hasn’t seemed as committed to his wrestling during his UFC stint compared to his days in the WEC. I think that is a big key to victory for him against Barao.

Faber, as most know, was an extremely successful collegiate wrestler at the University of California at Davis. He has tremendous explosion with his single- and double-leg takedowns. And once he gets a fight to the floor, Faber knows how to control an opponent while pounding away with fists and elbows.

Looking for a takedown may seem counterintuitive against an opponent with elite submission skills like Barao. After all, the Brazilian is probably at his highest comfort level when fighting on the ground. Nonetheless, Faber has amazing submission defense. He has faced plenty of ground wizards in his career and none have been successful in submitting him. Not once in 32 professional fights.

There are two reasons for that. First, he is a skilled Brazilian Jiu-Jitsu practitioner in his own right. He recognizes moves as they are coming and has a deep understanding on how to defend them. Second, and more important, Faber rarely gets put on his back. Plus, when he is in the top position, he is so active and has such great ground control that foes don’t have much of an opportunity to truly commit to submission attempts because they are so busy defending strikes, position and submissions.

Faber wants to do just that with Barao. I know Barao is a savage on the ground. But I firmly believe that Faber can keep him occupied and in defense mode without any great risk of getting swept or submitted from his back.

On the feet, Faber needs to be much more aggressive than he typically is. He needs to take the fight to Barao, who is a natural bully. That means pressing forward behind the jab and crisp one-two combinations. The key is to get Barao moving backward.

Barao may be the hottest fighter on the planet, but he didn’t necessarily look like a world beater when Scott Jorgensen pressed him on the feet in their last fight. Barao likes space. He likes to use his length. But he also likes to slug away in wild exchanges.

Faber should be intelligently aggressive. Press forward, exchange and then get out. He doesn’t want this to devolve into a slugfest with Barao. Faber is too talented on the feet to put himself at risk like that. Plus, Barao is a physical beast, so a slugfest opens the door for a spectacular knockout from one of his wild strikes.

If Faber avoids unnecessary exchanges and darts in and out with combinations, he should be able to pick apart Barao on the feet. Mix that in with a takedown or two, which will make Barao a bit more hesitant with his standup, and this becomes a very winnable fight for the ex-champion.

Flipping the switch, this is an immensely winnable fight for Barao, as well. Let’s start with the obvious. He is nearly eight years younger than Faber. It seems like 35 is the new 25 in the UFC, with so many elite competitors continuing into their late 30s. But the 33-year old Faber competes in the lighter weight classes, and the first thing to go with age is explosiveness. If Faber loses any of his quickness, then he will be susceptible when facing the division’s elite. The “California Kid” hasn’t shown any slippage in that area yet, but it is going to happen sooner or later. Barao hopes it happens on Saturday night.

Barao is also fresher than Faber. Despite having one more professional fight during his career than his foe, Barao has never been knocked out. Faber has been stopped twice. That may not seem like a big difference, but it is. Barao doesn’t have a ton of mileage on his engine. Faber is starting to accumulate it.

Barao also has better momentum. This guy hasn’t lost a fight since April 14, 2005. Thirty-one fights later, he is still going strong. Faber, by contrast, has lost four of his last 10. I personally disagree with one of those losses, but that is beside the point. There is something to be said for the intangible edge created by crazy long winning streaks. That intangible lies firmly with Barao.

On the feet, Barao isn’t nearly as technical as Faber. But he is no light lunch, either. What he brings to the dance is a long, sharp jab and a sick variety of vicious kicks. The kicks are a major key to victory for him.

Barao is a training partner of UFC Featherweight Champion Jose Aldo. That is important to note because Aldo faced and dominated Faber back in 2010. He did it principally through leg kicks. Aldo used that strike to completely incapacitate the then-champion. A fighter’s legs are the key to just about everything in fighting. Striking starts with the legs. Takedowns are highly dependent on legs. Movement is obviously dictated by healthy legs. And on and on.

Aldo brutalized Faber’s legs to the point where he was scoring knockdowns with leg kicks. Faber was left virtually defenseless while he suffered through a five-round bludgeoning.

Barao should do the exact same thing, with a twist. Rather than just hammer away at Faber’s legs, Barao should mix in spinning back kicks, high kicks and front kicks. This guy has tremendous speed with his kicks. And his ground game is so good that he probably won’t fear being taken down, despite that being one of my keys to Faber winning. His lack of fear of the takedown, mixed with brutalizing Faber’s legs, will actually make his kicks that much more effective, which, in turn, makes it that much tougher for Faber to get him to the ground.

At the end of the day, I think this fight is more even than most believe. I do think that Barao should be viewed as the favorite, but only by the slightest of margins. If Faber executes a great game plan without many material mistakes, he can certainly win the fight. Otherwise, Barao will likely be the one leaving Canada with interim gold draped over his shoulder.