The Blueprint - Evans vs. Ortiz II

Evans vs. Ortiz headlines UFC 133 this Saturday in Philadelphia. Michael DiSanto breaks it down... 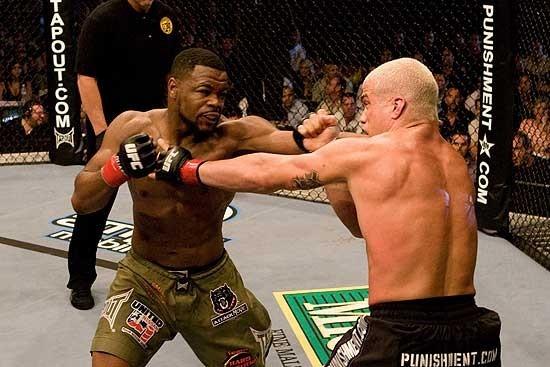 Rashad Evans and Tito Ortiz will dance for the second time this Saturday night.

Forty-nine months ago, Evans and Ortiz squared off in what was a turning point for each of their careers. Evans was taking a major step up in quality of competition. The then-undefeated prospect seemed like he had all the tools to be great, but nobody knew for certain whether he could take his game to the next level. After 15 minutes in the cage with Ortiz, there was no doubt that “Suga” was the real deal.

Ortiz was in a very different place in his career back on July 7, 2007. The former champion was seven months removed from his second technical knockout loss to Chuck Liddell. A bout with Evans was a way of getting back on the championship trail—if he won, of course.

Ortiz neither won nor lost the fight. He suffered an anti-climatic draw, thanks to a point deduction from illegally grabbing the fence in an attempt to prevent a takedown. But for that deduction, the judges would have awarded Ortiz the decision. Yet, it was Evans who likely left the cage that night with the edge in confidence. He knew that he could hang with Ortiz, once he settled down and actually engaged the “Huntington Beach Bad Boy” in a fight.

More than four years later, Evans is the former champion still in his fighting prime looking to get back to the top of the mountain. A win over Ortiz likely puts him at the front of the line for the winner of the upcoming battle between two of his arch enemies, Jon Jones and Quinton Jackson.

Ortiz, by contrast, is looking to make one final title push. Keep in mind that Ortiz was in a must-win situation, if he wanted to continue competing in the UFC, heading into his UFC 132 fight last month. His submission win over Ryan Bader was the first mixed martial arts bout that Ortiz has won since defeating Ken Shamrock back in October 2006.

So, what will happen this time around? The rematch between Evans and Ortiz will be decided by one factor: takedowns.

It really is that simple.

How can I be so sure?  Easy. Evans is much better in the standup realm. He is an expert counterstriker who has the speed and power to knock out just about anyone in the division, assuming he has the confidence to sit down and commit to his punches. In fact, I’ll go so far as to argue that Evans has the fastest hands in the division, bar none.

Suga’s hand speed gives him a tremendous advantage against just about anyone. Unlike most counterpunchers, Suga doesn’t like to slip punches and fire back. His forte is countering before his opponent completes a strike.  In other words, he fires a counter off of his opponent’s tell sign, and his blazing hand speed allows him to land first in those instances.

The perfect example is when Evans fought Liddell.  Evans noticed during pre-fight film study that Liddell’s expression changed or his face curled up with determination milliseconds before he fired a lead power punch, so he sat back and waited for that moment to arrive.  Evans fired a fully committed right hand the instant Liddell tipped his hand with his tell sign, and the punch landed right on the button, immediately ending the fight.

If Evans had the juice to knock out Liddell when he was still near the prime of his career, he certainly has the juice to stop a 36-year-old Ortiz. If the two engage in a firefight or any sort of contest that unfolds largely on the feet, then Evans winning by knockout seems like the most likely outcome. His standup skills are that much better.

Similarly, if Evans can put his fellow former champion on his back and keep him there for significant portions of the fight, he should be able to walk away with a victory. Granted, Ortiz has excellent Brazilian Jiu-Jitsu skills, including a grossly underrated offensive guard. Yet, there is very little chance that Ortiz scores a submission win over Evans. Not unless he first rocks Evans with some sort of strike, resulting in him making a rudimentary mistake.

Evans probably shouldn’t worry too much about searching for a submission, if he is able to score a takedown.  Fans must remember that Ortiz has not been submitted in more than a decade. The last time it happened he was so exhausted that he could hardly move— a situation that a cardio machine like Ortiz is not likely to face again.  Evans won’t be the one to break that streak. Not on Saturday night anyway.

Yet, if Evans can put Ortiz on his back and grind away with conservative ground and pound, he should be able to score a judges’ decision, just like Couture did against Ortiz back in 2003. Again, Ortiz’s ground skills are much better today than they were in 2003, but he isn’t going to be the first man to score a submission victory over Evans. Not from his guard, at least.

What if Ortiz is able to turn the table and put Evans on his back?

Well, if he can keep him there, then Ortiz wins the fight. Evans has never shown a great ability to defend from his guard. This guy is a lifelong wrestler, just like Ortiz, only he competed at a much higher level than Ortiz in the amateur ranks. Thus, like with many lifelong wrestlers, Evans is like a cockroach or a large tortoise on his back—basically harmless. And Ortiz is one of the best in the business at grinding out victories from the top position, if he is fortunate enough to score a takedown.

What about Ortiz scoring a knockout on the feet?

No chance.  Ortiz has shown better and better striking skills in each of his last several fights, including rocking and dropping Ryan Bader with a punch last month.  I certainly acknowledge that fact.  I will also acknowledge that anything can happen with those little vale tudo gloves.  It’s also accurate that Evans is viewed by many as being a bit “chinny.” Lyoto Machida left him in a heap in their 2009 bout. Thiago Silva and Quinton Jackson both rocked him badly in the final round of their losses by judges’ decision. But Ortiz doesn’t have the stand up juice of Machida, Silva or Rampage.

So what about Ortiz outpointing Evans on the feet?

Again, no chance at all.  Evans’ hand speed and technique will be too much for Ortiz, assuming he fights with confidence. In the first round of their last bout, Evans was hesitant in pulling the trigger. Shortly after the draw, Evans turned into one of the game’s elite sluggers. Of course, that came to an end when he got separated from consciousness by Machida. Since that time, Evans has shown less and less faith in his standup game. That may make him susceptible to dropping the first round. But that should be the only thing his tentativeness impacts. If Evans returns to his corner and hears that he lost the first round, he will begin to let his hands go, and that spells disaster for Ortiz.

So, how do I see the action unfolding?

This fight seems to have Evans written all over it, but that doesn’t necessarily mean he will win. A perfectly healthy, well-prepared Ortiz performing at the top of his game is pretty darn difficult to defeat.  The fact that Evans is coming off the longest layoff of his career is also extremely significant. Cage rust may be a very real factor in the outcome of the fight. Another question is whether he is finally in a good place about getting knocked out by Machida.

On the other side of the Octagon, Ortiz is a complete unknown at this stage in his career, despite his win over Bader.  How will he perform after a month-long layoff?  Will he still have the same legendary cardiovascular conditioning?  Has he continued to develop his game to compete with the new breed of elite fighters?

Honestly, I don’t know the answers to any of those questions, and neither does anyone else.

I could easily write another 1,500 words stating a case in favor of either man winning.  That is what makes this fight so intriguing.  Instead, I’ll just sit back, relax and enjoy the action as it unfolds.