The Blueprint - Evans vs. Davis 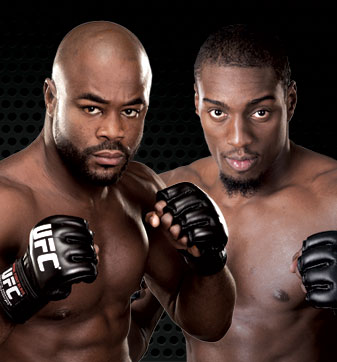 A string of injuries and a bit of bad luck has nearly rendered Rashad Evans an afterthought in the collective minds of mixed martial arts fans as he prepares to headline UFC on FOX 2 this Saturday night.

Evans saw three opportunities to challenge for the UFC light heavyweight championship slip through his fingers due to injuries. Two of those opportunities were to come against reigning champion Jon Jones, a former teammate turned bitter rival.

Davis is far from a tune-up bout for “Suga.” He may, indeed, be the most dangerous opponent that Evans has faced since losing the championship back in 2009. Davis might not have the same MMA credentials of Thiago Silva, Quinton Jackson, and Tito Ortiz. But he certainly does possess the one skill that many think is Evans’ kryptonite—elite wrestling.

Davis is, without a shadow of a doubt, the best wrestler that Evans has faced in his career to date. The four-time Division I All-American won an individual national championship in 2008 and finished in the top 10 nationally in each of his four years at Penn State. His collegiate record was 116-17. Evans also wrestled in the Big Ten sports conference, along with Davis, though he experienced far less success. In three years at Michigan State University, Evans racked up 48 wins in 82 attempts.

MMA isn’t wrestling. An amateur wrestling pedigree doesn’t always translate into elite takedown efficiency. Georges St-Pierre, who possesses some of the best takedowns and takedown defense in the sport, proved that point.

Nonetheless, the spread between Evans and Davis, in terms of pure wrestling ability, is enormous. If Davis is able to devolve the action into a wrestling match, which is precisely how Evans fought Jackson and Silva, then he is in a whole heap of trouble.

Why do I write those words? Phil Davis has never been taken down in a UFC bout.

Pause for a moment. Now, go back and read the preceding paragraph again.

Ok, that was overly dramatic. I know. I’ll quickly concede that Davis has never faced a highly decorated wrestler in the UFC. I’ll also concede that Evans has far superior takedowns to any of his previous opponents, and he is very adept at setting up those takedowns with strikes.

I don’t care. I don’t see any way for Evans to dominate, or even stalemate, the takedowns in this fight. He will not be able to take the action to the ground whenever he wants, unlike in just about all of his previous fights. That may seem like a major problem for Evans. I actually believe the opposite is true.

Evans was at his very best when he had complete confidence in his standup skills and chin. The results back up the statement. Dramatic knockout wins over Chuck Liddell and Forrest Griffin remain the best performances of his career. They also elevated him to the top of the sport, albeit for only a brief reign.

Sure, he got blasted out by Lyoto Machida after defeating Griffin, and he certainly fought Machida with all the standup bravado that he showed against Liddell and Griffin, but that can happen to anyone on any given Saturday in the UFC.

Since that loss, Evans has been a tentative, and dare I say somewhat boring, fighter. The Machida loss looked to erase any confidence he previously had in his ability to survive a power strike from a standup killer. His game plans, therefore, focused solely on quickly getting the fight to the ground and keeping it there at all costs.

Submissions and stoppages from ground strikes weren’t really part of the blueprint. Those actions require the attacker to take chances. Taking chances means risking an opponent escaping to his feet. Avoiding any scenario where that could happen was of paramount concern for Evans, once he scored a takedown.

I’m not surprising anyone by suggesting that his wins over Jackson and Silva were sleepers, rather than slobberknockers.

Evans’ win over Ortiz in his most recent bout was anything but a sleeper. Why? He didn’t respect Ortiz’s standup or his power. He knew for sure that he could take whatever Tito could dish out on the feet. The result speaks for itself—his first win inside the distance in two-and-a-half years.

I firmly believe that Evans can take the same approach with Davis. “Mr. Wonderful” is far more athletic than Ortiz, but he poses no greater threat on the feet, in terms of strikes.

The former collegiate wrestling star remains a work in progress in MMA. He defeats opponents with his wrestling base and pure athleticism. But his gaps in skills make it tough for him to finish top-level opponents. I know the submission against Tim Boetsch was a thing of beauty, but Boetsch isn’t on Evans’ level.

Evans should come out and see if Davis has the guts to initiate the action. Davis enjoys solid height and reach advantages, but he has nothing on Evans in terms of speed and striking technique. If Evans can bait him into throwing a jab, which Davis does with a noticeable hitch, the former champion will able to slip to his right and step in with a ferocious overhand right, his money punch.

If Davis refuses to lead, Evans should circle until he has opening to attack from an angle. Davis won’t be able to effectively change levels and power through for a double-leg when Evans is attacking off of one of his shoulders, rather than square to his core. Davis is not an expert striker, nor is he overly comfortable on the feet, so he will retreat in the face of pressure.

Liddell is one of the few mixed martial artists over the last several years who had the power and skill to land knockout strikes while retreating. Davis does not have that ability, which means Evans should really turn up the heat with his hands once his foe begins to move backward.

The pressure will cause Davis to do one of two things—cover up or desperately lunge for a takedown. Neither of those will cause Evans much agita. If Evans continues with a spirited attack, then a stoppage should soon follow.

I would not look to take Davis down, even if he opens the door by covering up. Evans has no idea if he will be able to control Mr. Wonderful on the ground. Why take the chance of a sweep and end up in the one position where Davis will have a major advantage—Evans on his back.

It probably goes without saying that Davis must get the fight to the ground in order to win. I believe that with all my being. His awkward strikes were somewhat effective in a few of his fights, but they won’t be against Evans, assuming the former champion rediscovered his standup swagger in the Ortiz fight.

Is this too much too soon for Davis? Will his otherworldly wrestling skills be enough to carry the day, or has he developed enough well-rounded skills to beat Evans in multiple positions?

Or, will Evans lock up what he so desperately covets—another shot at the title, which also has the fringe benefit of putting him in the cage with his bitter rival?

If forced to choose, my money would be on Rashad Evans. This guy really is the complete package. The only question mark hanging over his head are his chin and confidence. Neither should be a problem on the 28th. I think Phil Davis has tremendous potential. If he can get up the striking curve, the sky just might be the limit for this truly special athlete. I just don’t think that wrestling alone will be enough to get it done this time.