The Blueprint - Dos Santos vs. Mir 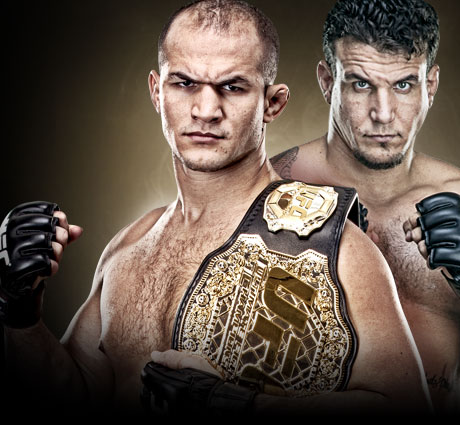 Junior dos Santos will make his first defense of the UFC heavyweight championship on Saturday night.

His original opponent, Alistair Overeem, has not been licensed to fight in Nevada and likely won’t be for quite some time. Thus, UFC President Dana White decided approximately four weeks ago to swap him out with former champion Frank Mir.

Talk about a major shift in preparation.

Overeem is possibly the most dangerous striker on the planet. “Cigano” will take serious umbrage to that statement, but there are lots of experts in the fight game who will co-sign with me on that one. Now, dos Santos must face the best heavyweight submission artist in the game—bar none.

Overeem wanted to take home the champion’s belt by sending his jaw into the fourth row. Mir wants to sit the belt on his living room mantle, alongside dos Santos’ arm or leg.  Like I mentioned, this required a major shift in focus and preparation for the champion, and he had to make that change with only a few weeks remaining before fight time. But, as the old adage goes, it is what it is.

Mir is probably the most underrated standup fighter in the heavyweight division, and he will definitely come out looking to throw hands with dos Santos. Guaranteed.

The early moments of the fight will be a battle of footwork. Mir, a southpaw, and JDS, a conventional fighter, will jockey to try and establish the outside position with their lead foot. Doing so opens up throwing lanes for lead power shots. It also puts the aggressor in prime position to drive forward for a takedown attempt, if the need arises.

Back in the day, I would have written that any game plan involving Mir standing with JDS was MMA suicide for Mir because JDS is a complete savage on the feet. He can end any fight with a single punch. Just ask former champion Cain Velasquez, who has only a single loss on his record. It occurred courtesy of a single punch from JDS 64 seconds into their fight.

JDS can do that to anyone, including Mir, but that possibility won’t cause hesitation in the former champion. He will stand and strike with anyone. We have learned that much over the last few years as Mir has morphed his game from a 245-lb submission phenom with little else to offer to a 260-lb polished striker with the best heavyweight submission game in the world.

Mir’s game plan will be simple. He will look to pot shot JDS with his straight left hand while circling to his own right. He needs to move in that direction to stay away from the champion’s bazooka-like right hand. Circling right also helps maintain the outside position with his lead foot to keep his throwing lanes open.

Mir should mix in hard outside leg kicks, particularly on the end of fistic combinations. He has absolutely no fear whatsoever of being taken down by JDS. Granted, the champion is a black belt in Brazilian jiu-jitsu in his own right. But, as I’ve written many times, there are black belts, and then there are BLACK belts. Mir is a BLACK belt. He beats JDS every day, all day in a submission grappling match.

Mir can also use lead outside leg kicks to transition into a left cross. That combination is dangerous because JDS will be looking to catch kicks and bring the fight to an instant end with a counter right hand. But Mir can still score with it from time to time, if he keeps changing up his attacks.

The former champion needs to remain keenly focused on his footwork and head movement throughout the fight. He is a polished striker, but hasn’t really shown the same sort of devastating show-stopping power in his punches as dos Santos. That means Mir must be prepared to go five hard rounds, if the fight remains standing. Sure, Mir has plenty of power to knock out JDS, but it probably won’t happen early from a single strike.

Standup exchanges will undoubtedly open the door for clinches. That is where Mir will look to take the fight to the ground. He isn’t a great single- or double-leg guy. He is much better with trips and throws.

On the ground, Mir will bang away with a ground-and-pound attack, while looking for his foe to make a fight-ending mistake. Once the opening presents itself, Mir will attack with his transition jiu-jitsu skills like there is no tomorrow. This guy is so insanely talented and physically strong that he can turn what seems to be a near-miss submission into a finish. There are several UFC fighters who can attest to that after finding themselves in a cast for a couple of months following a loss to Mir.

JDS will do his best never to find if his BJJ skills are sufficient enough to survive on the ground with Mir. He wants to keep this and every other fight standing from start to finish. That is typically a great game plan for the champion, and this fight is no different.

JDS is probably the best boxer in the heavyweight division. He stands in traditional boxing style, with his legs far apart and his body almost perpendicular to his foe. That allows him to generate tremendous power in his shots because he can fully rotate his hips with his right hand. It also gives him the proper foundation for his most effective weapon – the right uppercut.

“Cigano” has a right uppercut reminiscent of former boxing heavyweight champion Mike Tyson. It is one of his go-to strikes, both as the second part of a two-piece combination and also as a lead. If he connects cleanly, it will likely mean a lullaby for Mir.

I’m not suggesting that JDS is a one-handed fighter. That is far from the truth. He probably has the best jab in the division, which could be a major key against Mir because I have no doubt that the former champion will be circling away from JDS’s right all night.

JDS snaps his jab as a professional boxer, and unlike with most boxers, it is a jackhammer that causes very real damage, rather than just serving as a range finder. But I don’t necessarily think that he should be focused on landing it squarely on Mir’s nose. I think he should instead use the shot as more of a corralling strike by throwing it at the right side of Mir’s face.

Outside jabs and lead left hooks will help force Mir to move to his left, right into JDS’s right hand. JDS can also jab and quickly fire a right uppercut up the middle or even double up on the jab or throw one of his slick jab-left hook combinations before immediately cleaning up with his money punch.

Those combinations should be particularly effective because Mir, like JDS’s last opponent, does not retreat straight back in the face of incoming fire, like most mixed martial artists. He instead stays in the pocket and moves his head and upper body like a pendulum to slip shots.

Mir returns to center after slipping a shot, just like a pendulum. That means he could well be front and center by the time the cleanup uppercut arrives.

But that isn’t the end of the champion’s options with his favorite strike. He can also lead with the right uppercut. I know that is an unconventional way to attack, but JDS is extremely effective leading with his right uppercut, mostly because he commits to the punch and also because he possesses elite hand speed.

At the end of the day, JDS is the rightful betting favorite entering Saturday night’s fight. His strength is his striking. Some may argue that he is the best heavyweight striker in the UFC, though Overeem will vehemently argue otherwise. Best or second best, all five of Mir’s career losses have come inside the distance via strikes. The fact remains that the last truly devastating striker in his prime who also happened to possess elite takedown defense that Mir faced was Shane Carwin, and Mir got blasted out with punches in under four minutes.

Those are telling data points that cause many to believe that JDS will win the fight. I’m not so sure. JDS and Carwin are completely different standup fighters. Carwin used his size and brute strength to force Mir up against the cage, and then relied on dirty boxing to turn out the lights. JDS fights more in the center of the cage, where Mir is much more comfortable and effective.

I’m not arguing that Mir should be the favorite. Not at all. The point I’m trying to make is that Mir is being vastly underrated in this fight. Do I expect him to win? I don’t know. But I wouldn’t be surprised to see it happen.