The Blueprint - Dos Santos vs. Carwin 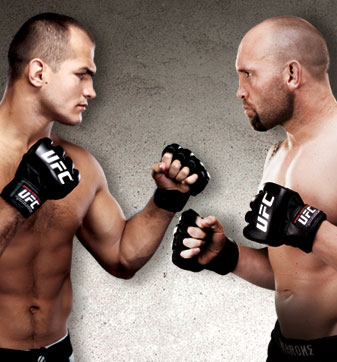 Junior dos Santos has to be wondering what fate has in store for him.

The Brazilian bomber was originally scheduled to be the first man to challenge Cain Velasquez for his newly won heavyweight crown last year. Dos Santos was undoubtedly thrilled with the opportunity, even though it appeared to be the toughest test of his mixed martial arts career to date.

When Velasquez announced shortly after winning the title that he needed shoulder surgery, dos Santos was understandably frustrated. His first shot at UFC gold would have to wait possibly a year to materialize. Remember that mixed martial arts is a sport where athletes compete only a few times a year. Thus, he needed to stay active to earn a paycheck, despite the fact that taking any interim bouts would place his title shot in jeopardy.

Things rarely come easy in the UFC heavyweight division, and dos Santos’ replacement opponent was no exception. He was set to face Brock Lesnar, a 265-pound former NCAA Division I wrestling champion with out of this world strength, quickness and overall athleticism, after a career-boosting stint coaching opposite Lesnar on “The Ultimate Fighter.”

On paper, Lesnar was a very real threat to dos Santos because of his elite wresting pedigree. Say what you will about dos Santos’ overall skills. The one place he does not want to find himself is fighting from his back with Lesnar on top of him. Nevertheless, if he successfully defends the takedown, then the pendulum dramatically swings in dos dos Santos’ favor, to the point where the division’s number one contender would likely be able to comfortably handle the former champion.

I’m sure that dos Santos drilled takedown defense for hours upon days during the filming of TUF. His team likely obsessed over Lesnar’s tendencies and tell signs in an attempt to neutralize his gargantuan wrestling advantage.

Then the injury bug hit for the second time.

Lesnar recently received word a few weeks ago that his bout with diverticulitis was not over, so he would have to return to the hospital for additional treatment. With the fight between the two just around the corner, dos Santos needed a new opponent if he was going to remain on the June 11 card.

That is where Shane Carwin steps in. Zuffa announced shortly after learning of Lesnar’s flare up that he would be replaced by Carwin and face dos Santos in a title elimination bout.

Talk about a 180-degree shift in fighting style. Carwin, like Lesnar, is a former amateur wrestling champion. But, unlike Lesnar, this guy has excellent pure boxing skills and as much one-shot stopping power in his fists as anyone in the division, including his opponent.

That is in stark contrast to what dos Santos is saying publicly about the matchup. He stated during the TUF 13 finale that he expects Carwin to try and put him on his back, so preparing for him wasn’t any different from preparing for Lesnar. I hope those words are nothing more than gamesmanship for his sake, because Carwin is going to come out headhunting, not shooting for a double. I guarantee it.

Until his last fight, which happened to be his first career loss, Carwin owned a rather unique distinction. He finished each of his first 12 opponents, including former UFC heavyweight champion Frank Mir, in the first round. Mir was the only one among them to last more than three minutes.

It suffices to say that Carwin’s knockout efficiency is as close to a young Mike Tyson as anyone who has ever entered the Octagon—bar none. Dos Santos loves to box with opponents, but he absolutely must respect his opponent’s power, if he wants to avoid becoming victim number 13.

What does that mean? The Brazilian should come out looking to employ a tactical standup attack, rather than rushing in and swinging for the fences. Hard, straight jabs; quick one-twos; the occasional lead left hook or right hand; and solid footwork. That pretty much describes dos Santos on an average day, so the game plan heading into this fight isn’t much of adjustment to how he normally fights.

The key words are “isn’t much” because dos Santos would be well served to make a few adjustments. Chief among them is committing to slip and counter, rather than leading the action.

Dos Santos is an aggressive predator. He prefers to dictate the action, rather than counter. His commitment to attacking is likely based on the notion that opponents are less dangerous when defending incoming fire and backing up than when they are standing ready to fire.

Carwin is the exception to that rule. This guy has the rare ability to deliver knockout blows while appearing to retreat. It is the same rare ability that made Chuck Liddell one of the greatest knockout artists and most feared fighters of his day.

If dos Santos carelessly attacks, Carwin has enough power in his fists to score a knockout with what seems to be nothing more than an arm punch. He also is known to take a step backward in apparent retreat only to plant on that foot and springboard back with a fight-ending blow.

Part of that is natural fighting ability. The rest is due to the fact that Carwin, like Liddell, remains eerily calm when faced with an aggressive attack. They can wait for, identify and pull the trigger to expose openings that present themselves in those situations.

Dos Santos should try and turn the tables in this matchup. Rather than expose himself to a knockout blow during aggressive attacks, he should allow Carwin to lead the action by circling to his own right, away from Carwin’s nuclear bombs, and pawing with jabs thrown from well outside of striking range. Carwin will chase him in that scenario. It is in his DNA to do so.

Carwin is going to be Carwin come fight time. There is no doubt about what this guy is coming to do. He will be throwing big power shots right from Jump Street, and he won’t stop until the fight is over, one way or another. I think he should flip the script and shoot for an immediate takedown when the fight gets underway.

I know dos Santos is publicly acknowledging that he expects that approach, but he cannot possibly believe his own words. Carwin has never approached an opponent in that way. As a result, if Carwin comes charging out of his corner with his hands held high, dos Santos will assume that a firefight is about to ensue.

Throwing a halfhearted jab to sell the notion that a fistfight is about to unfold and immediately transitioning that into a takedown, using his outstretched left hand to snag a leg, is just what that doctor ordered to completely befuddle dos Santos.

I’m not sure Carwin wants to stay on the ground too long with his opponent, who can handle himself in Brazilian Jiu-Jitsu. But he can certainly rain down with some quick, violent ground and pound. If, at any point, Carwin feels like a submission is on its way, he can merely retreat back to his feet.

That one takedown will forever change dos Santos’ mental approach to the fight. It will leave him a bit unsure about what is coming next because he will need to keep mindful of defending future takedowns. Uncertainty leads to hesitation. Hesitation leads to a knockout loss against a guy like Carwin.

Slipping and countering. Leading with a takedown. Those game plans are great. But if I’m a betting man, my money is on the fact that neither guy will follow the suggested approach. Both men will attack with calculated aggression. Dos Santos will look to establish himself as the man dictating the pace. Carwin will show little interest in takedowns. While that may not be the best way for either man to win, it is the best recipe for a potential Fight of the Night, or maybe even Fight of the Year, candidate.

I have no idea who is going to win this matchup. All I know is that this one is not going to last the distance. The end will come abruptly. It will come spectacularly. And the winner will be first up for new champion Cain Velasquez, as soon as he is healthy enough to defend his title.