The Blueprint - Diaz vs. Gomi

Nate Diaz takes on Takanori Gomi this Saturday night in UFC 135 action...Michael DiSanto breaks it down...

That was the night that Nick Diaz transformed into the underground icon that he is today. He did it by engaging in one of the most entertaining fights of the year with Japanese superstar Takanori Gomi. Diaz won the bout with one of the most improbable submission holds in the sport. A gogoplata is a move where a fighter uses his shin to choke out his foe from the guard.

The move itself is a thing of lore, a move often practiced in the gym, particularly at Eddie Bravo’s Tenth Planet Jiu-Jitsu. But it is a move that is exceedingly difficult to pull off in competition. Diaz did it while getting punched in the face by his foe.

Despite the fact that the fight result was later switched to a no contest, Diaz officially came into his own as a professional fighter on that night, racking up an 11-1 record in his next 12 fights en route to winning and defending the Strikeforce Welterweight Championship.

Nick’s little brother Nate hopes to follow in his footsteps on Saturday night, when he gets his own crack at Gomi. For the younger Diaz, the fight has major career implications. He is riding a two-fight losing streak. Three in a row sometimes results in a trip to the unemployment line, so one could say that Diaz is fighting for his short-term future.

Gomi also has something to prove. The former PRIDE Lightweight Champion was once the biggest name in the sport among 155-pounders. But he is only 1-2 in his three-fight UFC career. A win over Diaz on Saturday night instantly reestablishes his relevance in the lightweight division.

There is no doubt how Diaz will approach the fight. He is a carbon copy of his brother. He looks to box from a southpaw stance with pawing hands disguising crisp, short punches from unorthodox angles. He drops his hands time and time again, seemingly sticking out his chin in taunting fashion, only to land a jab from his waist or a left hand thrown from the same position.

Diaz does not have knockout power. Not at all. He has only a single knockout on his resume over the last five-plus years. Granted, that one knockout was a jaw-dropping display of precision striking against the bigger Rory Markham. But that isn’t his forte. He instead uses his boxing to dare an opponent to take him down, so he can utilize his brown belt in Gracie Jiu-Jitsu.

Make no mistake about it: Diaz would be a black belt under just about any other BJJ master. Cesar Gracie gives out black belts like the IRS does tax exemptions. He has sick submission skills. Seriously sick. Very few fighters want to test his guard game. Diaz will pound away at Gomi on the feet, hoping to either get taken down or find an opening for an easy takedown. He knows that on the ground, he will hold a major advantage in this fight.

That is not likely the case on while the fight is on the feet. Unlike Diaz, who boxes with “chip away at the mountain until it crumbles” style, Gomi is a home run hitter. He has no interest in the feeling out process. He is all about firing punches with bad intentions. Those who have long been watching the Japanese slugger know that he is the holder of the fastest knockout in PRIDE history—a six-second obliteration of Ralph Gracie in 2004.

Gomi mixes his boxing with good, solid wrestling skills. He isn’t a slick submission guy. Instead, his ground game focuses on ground and pound. And he fires his strikes on the ground with the same ferocity that he does on the feet, which is why there are a string of opponents he left lying on the canvas in an unconscious heap during his PRIDE fighting career.

Because of that, he won’t have any qualms taking down the younger Diaz brother on Saturday night. Gomi will be in major trouble if he tries to play the jits game with Diaz. He will be just fine if he keeps Diaz busy defending punches, rather than moving through his submission transitions.

If Gomi has a weakness on the feet, it is the fact that he tends to drop his head and loop his right hand when he really wants to load up, which is pretty often. Diaz can take advantage of that by identifying the strike, stepping to his left and firing a right uppercut. That sounds counterintuitive, but by stepping to his left, he can avoid the looping right while still keeping himself in good position to effectively counter with his right hand.

Diaz shouldn’t expect to score a knockout with his punches. As mentioned, he is not a true power 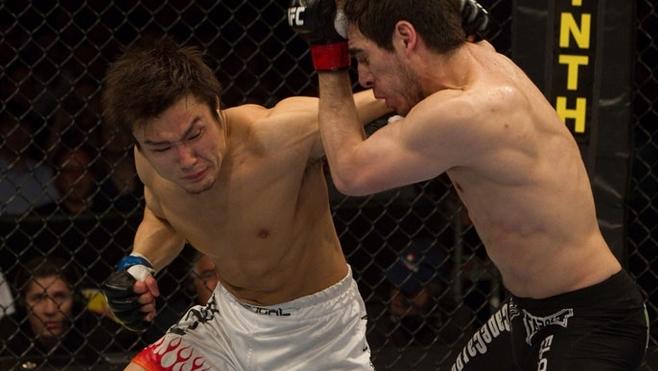 puncher, and Gomi has a very good chin. Sure, he has been hurt several times during fights. But nobody has knocked him out in 40 professional fights, and it is unlikely that Diaz will be the first to do so on Saturday.

Instead, if Diaz can land a good right uppercut, he can clean it up with a left hand down the pipe. Those shots in combination should leave Gomi either wobbly and wide open for a takedown or desperate to score a takedown of his own. Either way, Diaz should then be able to take the fight to the ground, where he can utilize his biggest strength against Gomi’s biggest weakness.

Despite the fact that Gomi is a good wrestler with solid ground-and-pound game, his submission defense is less than stellar. Six of his eight professional losses (or five of seven, if you exclude Nick’s no contest) occurred by submission. That is a big hole in his game, one that Diaz can exploit.

Gomi’s game plan should be to avoid fighting in a phone booth with Diaz. Even though he is the bigger puncher, his foe will be the one who is much more comfortable fighting in close quarters. Diaz trains constantly with one of the best in-fighters in the sport—his brother. Gomi needs space to land his long, looping bombs. Plus, he needs space to avoid getting overwhelmed with Diaz’s swarming, pawing, non-stop punches.

Establishing space means using good lateral movement. Since Gomi is fighting a southpaw, he should circle to his own left behind the jab. The key is to position his lead left foot outside of Diaz’s lead right foot. By doing that, he creates a perfect throwing lane for his overhand right. He can lead with the punch, when the opportunity presents itself, since Diaz will have his hands at his sides most of the time.

That is the fight in a nutshell. I have no idea who is going to win this one. Gomi will have tremendous motivation to try and avenge his former loss to the Diaz family. Nate will have equal motivation to follow in his brother’s footsteps.

Whoever wins, this fight has “Fight of the Night” written all over it.