The Blueprint: Couture vs. Machida

Randy Couture takes on Lyoto Machida at UFC 129 on April 30th - Michael DiSanto breaks it down... 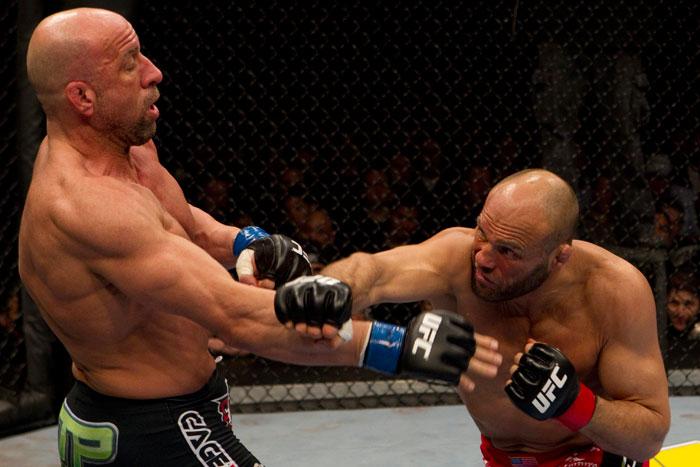 If you don’t know, you’d better ask somebody.

Oh yes, he also owns a locker in the UFC Hall of Fame.

Couture is a living legend. An iconic mixed martial artist. He is also old enough to be a grandfather at 47 years old, which means Father Time is the most ferocious opponent hanging out there in front of him. No athlete remains undefeated against Father Time. Nobody. Not in any sport.

Couture’s run of success is going to come to an abrupt end sooner, rather than later. Will it happen on April 30? Will Lyoto Machida, a man in desperate need of a win after suffering the first losses of his career (in back-to-back fashion, no less), beat him into retirement? Or, will the aging wonder continue to turn back the clock with his brilliant game planning and wrestling-based execution?

Remember that Machida’s game is everything Couture doesn’t want in an opponent. He is an ultra elusive striker with some of the fastest hands and quickest feet in the sport. And his takedown defense has been nearly perfect in his career. Not to mention the fact that Machida also is a former champion.

It suffices to say that this may very well be the most intriguing 205-pound battle of 2011 to date.

The blueprint to victory in this matchup is very simple and straightforward. Couture has to do one of two things, if not both. He needs to crowd Machida up against the cage in the clinch and use his expert dirty boxing tactics to grind away at Machida’s explosiveness. That is the foremost key to victory for “The Natural.”

A distant second is taking Machida down and hammering away at him with conservative, though consistent, ground and pound. Couture must remain conservative with his attack because Machida is a submission master with an underrated guard.

Couture hasn’t been submitted in nearly a decade. Ricco Rodriguez is the last man to accomplish that feat, and it was not a true submission. Rodriguez cracked Couture’s orbital bone with an elbow from the top position, forcing the then-champion to submit.

It is tough to imagine Machida slapping on a slick triangle, rolling into an armbar, hooking an omoplata, or otherwise submitting the Hall of Famer from his guard. MMA is a game of inches, though. If Couture gets complacent with his ground and pound or otherwise makes a careless mistake while trying to pass, it could happen.

On the other hand, if Couture is conservatively relentless with his strikes following a takedown, a stoppage is likely to follow.  Fans and experts alike tend to forget that Couture is one of the great finishers in the sport, scoring wins by stoppage in exactly three-fourths of his UFC bouts. If he gets Machida winded or can otherwise corral him long enough to take the fight to the ground, a stoppage is not only possible, it is likely to happen.

Machida’s keys to victory are equally obvious. He needs to keep the fight on the feet and avoid the clinch. It is that simple. If he can turn this into a kickboxing contest, or even just a boxing match, he will win going away. Machida’s standup skills are far superior to those brought to the cage by his foe. The speed and footwork differential is almost otherworldly compared to the man 15 years his senior.

Of course, Machida cannot get comfortable with those advantages and stand in front of Couture. Doing that opens up opportunities for the all-time great to close the distance for a clinch. Machida may have fared well against Tito Ortiz and others in the clinch. None of those guys have the stalemating clinch game that Couture brings to the fight.

Machida needs to use lots of lateral movement and attack behind his trademark exaggerated head and shoulder feints to keep Couture off balance. Those are the keys to keeping the fight on the feet. Forget the jab. Machida’s jab isn’t that great to begin with. I like the southpaw leading with straight left hands and then immediately circling out.

If he happens to catch Couture right on the button with one of those lead lefts, then he can attack with a flurry, like he has against so many other foes. That is when the knockout is likely to occur. But Machida should not look for the knockout. He should not press with his punches. He should remain very content to outpoint his foe en route to a decision.

I honestly have no idea who is going to win this fight. I continuously underestimate Couture because of his age. My brain tells me that, at 47, he cannot possibly have enough left in the tank to topple an elite athlete like Machida. My heart tells me that my brain is wrong once again.