The Blueprint - Browne vs. Bigfoot 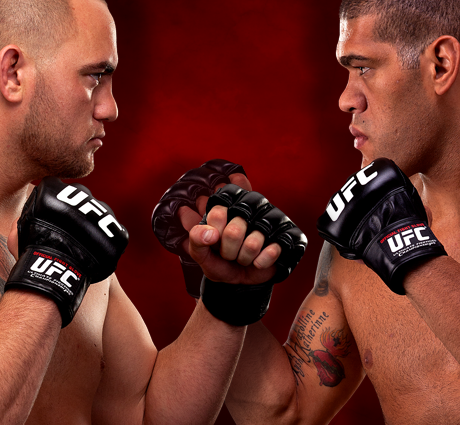 Antonio Silva is one big dude. That is why he is adorned with the nickname “Bigfoot.” The Brazilian is six-feet, four-inches tall and cuts weight to make the UFC’s 265-pound heavyweight limit.  And his hands, when clenched, more closely resemble sledgehammer heads than fists.

It’s rare that Bigfoot finds himself facing a similarly sized man in competition. But that is precisely what will happen on Friday night, when Silva returns to the Octagon for a second time. Travis Browne might be a dozen or so pounds lighter than his foe, but he is three inches taller. Thus, Silva will be looking up at Browne when the action gets underway, something he hasn’t often had to do in his professional fighting career.

I’m not sure what any of that means, other than two giants will be fighting in the main event of Friday’s FX broadcast. The far more relevant question is whether Browne will continue to separate himself from the heavyweight pack, as he searches for his first opportunity at UFC gold. That will be no easy task, because Silva is a rough and tumble heavyweight, who just so happens to sport black belts in Brazilian jiu-jitsu, karate and judo, a great combination for mixed martial arts success.

The only black belt Browne owns is the one that holds up his trousers when wearing black shoes. But that is OK. He isn’t worried about the non-MMA accomplishments of his opponents. He is more interested in learning if Silva can pass the chin checker test. “Hapa” is a master of asking that question.

It’s a question that many believe that Silva won’t be able to answer. The Brazilian has been knocked out three times in his career, including in each of his last two fights. The reason for that is a simple one. The monstrous heavyweight might be a great offensive fighter. But he is only average, to below average, when it comes to defending strikes.

Silva’s head movement is almost nonexistent. His footwork is good, but that alone doesn’t address the lack of head movement. Instead, Silva prefers to avoid incoming fire by keeping his opponents on the defensive with constant pressure.

That is a dangerous game plan against a guy like Browne, who not only packs his vale tudo gloves with nuclear warheads, but also is extremely light on his feet. One left or right hand counter on the button from Hapa, and Silva may be left counting the ceiling lights.  He can create opportunities for quick, explosive counters by using good lateral movement in the face of an attack. Not running circles around the cage. Quick sidesteps to change angles.

Silva showed that he has no real answer for a heavyweight who has active hands and quick feet. Pull up video of his fight with Cain Velasquez in Silva’s UFC debut. The former Strikeforce standout was completely lost on the feet against the far quicker, more accurate Velasquez. Browne has those same skills. He may not be as quick as Velasquez. Few heavyweights are. But he is quick enough and has greater show stopping power in his fists.

To avoid ending up slumped on the canvas, Silva needs to turn this into an ugly, clinch-filled fight. Remember that he is heavier and likely stronger of the two. His black belt in judo will come in very handy during infighting moments. He can throw Browne or just use technique to smother him against the cage and use dirty boxing.

The former is how Cheick Kongo neutralized Browne in what should have been the Hawaiian’s lone loss of his career. Kongo’s decision to hold onto Browne’s shorts more than a few times led to a one point deduction and a draw, rather than a judges’ decision win. Silva should watch the tape of that fight and try to emulate Kongo’s performance.

If the opportunity presents itself, Silva should use his judo to throw Browne to the canvas. Hapa is a savage striker, but we don’t know how good his guard game really is at this point, because nobody has really been able to test him in that position.

Silva has more than enough top game to do more than test Browne’s guard. He likely has the skills to crack it.

I like Silva every day of the week and twice on Friday if he is able to put Browne on his back and keep him there. Whether he pounds him out, moves into side control and chokes him out or some other ending, I think Silva wins in that position.

On the other hand, I favor Browne by leaps and bounds, if the fight remains standing. And I like him by Knockout of the Night-type ending.

Who is going to win? Browne seems like a comfortable favorite. Remember, this guy hasn’t yet experienced the sour taste of defeat as a professional, so when the going gets tough, he will remain confident in his ability to pull out a win. Silva has a handful of losses, so when adversity hits, he may fall into a “here we go again” mode. That is another reason why I lean toward Browne.

Despite all the Xs and Os, the one thing that is true about each and every heavyweight matchup is that it only takes one mistake to forever change the course of history, particularly when two behemoths like these guys lock horns.  I like Browne to win, but I’m more convinced that it will be a great fight with a spectacular ending than I am in my belief that the Hawaiian will maintain his unbeaten streak.