The Blueprint: Bisping vs. Belfort 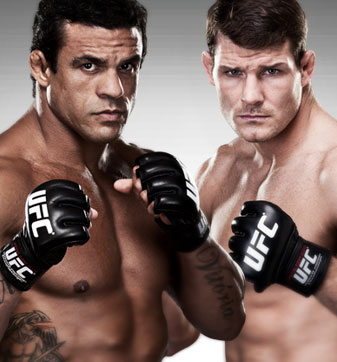 Do you love standup-only fights?

If so, the main event on FX this Saturday night is must-see TV. Vitor Belfort versus Michael Bisping pits two of the UFC’s best 185-pound strikers (not named Anderson Silva) against each other in a championship eliminator, of sorts.

If Bisping wins, he is next in line to face the sport’s apex predator, Anderson Silva, in a middleweight title fight. If Belfort wins, a title shot likely won’t be in his immediate future considering his UFC 126 loss to Silva in 2011.  But it probably depends on how dominant he looks, to be quite honest. Whatever the case, it is safe to say that this is a pivotal fight for both men.

This is one of the easiest fights in recent memory to break down. There will be no takedowns. Not unless Belfort wants one, which he won’t. There will be no submission attempts, despite the fact that Belfort has an amazing ground game, one that almost finished off 205-pound champion Jon Jones just a few months ago.

Instead, this will be a standup chess match of the highest order. Why? Because that is how these guys love to fight. More importantly, Bisping doesn’t have the skills to get Belfort to the ground, absent a knockdown. And Belfort has no interest in taking the fight to the ground, win over Anthony Johnson notwithstanding.

The chess match will be decided by which man can execute his game plan. Bisping wants to rip and run. He wins this fight by decision or maybe by late knockout. Belfort will be chin checking off counters. He wins by savage knockout.

It is really that simple.

Bisping is a tremendously skilled mixed martial artist who thrives in the standup realm. He has outstanding cardiovascular conditioning, so he can throw punches in bunches for days. Mix that with his particularly quick hands, and he is a handful for any middleweight in the world, including the reigning champion.

The problem, however, is Bisping doesn’t have home run power. He strikes with very good explosiveness, but he can’t stop the fight with a single blow. That might be his only weakness in the standup game.

As a result, Bisping knows that he needs to put shots together. Two- and three-punch combinations are his best friend. Well, his almost best friend.

Bisping’s true best friend on Saturday night will be his footwork. He needs to rely on his footwork because the Brit’s weakness is Belfort’s biggest strength. He is the king of the middleweight mountain, in terms of show-stopping punching power. A single left hand can end the fight in a split second. Bisping knows that, which is why he will avoid planting his feet and going to war with Belfort at all costs.

As a result, Bisping’s best friend will be his footwork. This guy needs to utilize ever-changing angles, both with his strikes and his feet, if he wants to present an unhittable target to his foe. An unhittable target is his best chance of winning.

Ok, I don’t really mean unhittable. Nobody, not even our Matrix-like champion, is unhittable. Nonetheless, Bisping needs to severely limit Belfort’s opportunities, if he wants to win.

That means working to keep his lead left foot outside of Belfort’s lead right foot. No, this isn’t a waltz. But that sort of footwork is key when an orthodox fighter, like Bisping, wants to defeat a southpaw carrying c-4 in his gloves.

Since Belfort is an extreme counterstriker, Bisping should be able to rack up points on the cards, if he rips and runs. In other words, he should touch the Brazilian—tap, tap, tap fashion—and then get the heck out of there, before he gets countered with a bomb.

Speaking of bombs, Belfort is the middleweight king of bombs, as mentioned. The Phenom knows that all he needs is to do is touch Bisping’s chin once, and the fight is likely to be over. If he hands one of his trademark flurries, it will absolutely be over. Period. End of sentence.

That means Belfort won’t be out there looking to win a point-style kickboxing boxing bout. He will, instead, embrace what already comes naturally to him—sitting back and countering. Even at 35 years old with nearly 16 years in the sport, Belfort remains one of the fastest fighters in the game - certainly faster than Bisping.

That means waiting for Bisping to lead with a hitched left jab, which he does from time to time, or a telegraphed right hand. Belfort will look to slip either strike, step in and fire like there is no tomorrow. Belfort’s blazing hand speed allows him to land both fists with insane force and velocity. But again, he can also detonate a single fight-ending blow.

Footwork is equally important for Belfort. He needs to win the battle of the lead foot the same way that Bisping needs to win that tactical chess match. It’s not about opening throwing lanes or leaving escape room for Belfort. Keeping his lead right outside of Bisping’s lead left will help force the Brit into his left hand.

But there is more to Belfort’s footwork strategy than just winning the lead foot battle. He must also step forward at an angle with his trailing foot. That will leave him slightly out of position for an immediate counter. That is all right. Belfort should be more concerned with cutting off the cage and forcing Bisping to the fence than worrying about leading with his own shots.

Trust me on this one. If Belfort is stalking, Bisping will be retreating—striking and retreating, but retreating nonetheless—in a calculated and tactical fashion. Again, if he plants and swings, Bisping will wake up after the referee has already waved off the fight. And his first question will be, “what happened?”

Stylistically, this fight has Belfort written all over it. We didn’t dive into the analysis, but Belfort has the far superior ground game. He is also physically stronger with a better clinch game. But neither of those things will play an outcome-determinative role in the fight, in my opinion. This is all about Belfort’s power against Bisping’s tactics.

Of course, Belfort has struggled in the past when faced with career-defining moments. This is exactly that for a fighter who is likely searching for the last shot at UFC gold that he will receive in his career. If Belfort loses to Bisping, it is hard to imagine him earning another title fight before he hangs up the gloves in the next couple of years.

This tendency to fall short in big fights has to leave Bisping filled with confidence. Add to the equation that Belfort tends to run out of gas after a couple of rounds, and Bisping is probably looking to rip and run through two rounds before holding his ground a little more after that point.

With all of that said, I am picking Belfort to win, though I would not be surprised in the least bit to see the Count pull off the ever-so-slight upset.