The Blueprint: Barao vs. McDonald 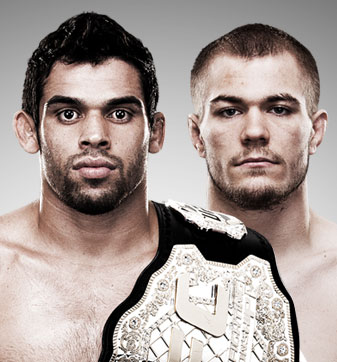 Let’s cut right to the chase.

If this is the beginning of the Renan Barao era, he absolutely must win on Saturday night. No ifs, ands or buts about it. He has to defeat Michael McDonald.

Many think Barao is going to redefine bantamweight greatness. While that sounds like tremendous hype, folks have to take into account that the Brazilian monster hasn’t lost in his last 32 professional fights.

He has only competed 33 times as a professional. That is one heck of a winning streak.

The 32-fight run makes Barao the hottest fighter in the UFC. His latest effort was the complete domination of former champion and WEC poster boy Urijah Faber.  The bout won Barao a share of the 135-pound title and solidified him as a force to be reckoned with in the UFC.

In terms of styles, Barao prefers to stand and strike, particularly early. Yet, he has never won by knockout in the UFC. One would never assume that fact after watching him fight because Barao swings from his heels all day every day. He also happens to be one of the biggest, strongest bantamweights in the world, so he has scored his share of knoc downs. None of those have translated into a knockout, however. Not yet, at least.

Instead, the Brazilian prefers to rely on his elite-level Brazilian Jiu-Jitsu once the fight hits the canvas. Or at least dominate the action in an anaconda-like fashion en route to a judges’ decision.

Slugger on the feet. Tactician on the ground. That sounds like someone with an identity crisis. But it works for Barao. He happens to be just about equally effective at each part of the game, despite the fact that he rarely finishes with his fists. That is what makes him such a dangerous opponent.

Of course, McDonald loves to scrap on the feet. He will plant his feet and trade with anyone. That is one of the great aspects of this fight.

Not to mention that McDonald is attempting to become the youngest champion in UFC history. If he wins on Saturday night, he will break Jon Jones’ record in that regard.

That alone makes this an interesting fight. The fact that these two are going stand and bang with each other makes it must-see TV.

There isn’t much else in terms of breaking down this fight. Barao is the rightful favorite, one who should be able to find a way to win, if he is the champion that most believe him to be. Why? He has more tools in his toolbox. Pure and simple.

And he might be the very best 135-pound fighter in the world, reigning - but sidelined - champion Dominick Cruz included.

But McDonald is a very live underdog. He is just a few weeks after his 22nd birthday, so he still has that sense of invincibility ingrained in his DNA. The fact that he has a loss on his record is irrelevant. McDonald avenged the loss with a particularly brutal knockout win over his lone career conqueror. He has the confidence of an undefeated youth. Trust me on that one.

Will he pull off the upset? I don’t know. It’s tough for me to pick against Barao in this one. But I’ve been wrong before. Am I wrong again?

You tell me. I’ll be reading the comments below, as always.