The Blueprint: Aldo vs. Hominick 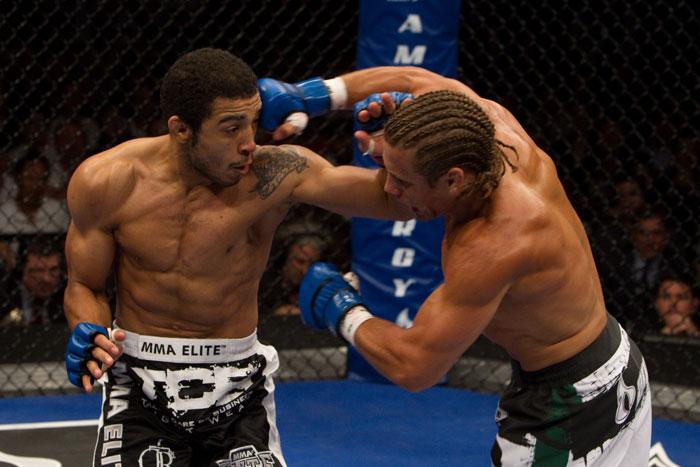 Competing in the UFC 129 main event on April 30th, both Jose Aldo and Mark Hominick compete in the UFC’s newly minted 145-pound division, a weight class crowded with whirling dervish-type fighters that often thrill fans with non-stop, video game-like action. Aldo is the division’s unquestioned king, receiving the belt in exchange for his WEC championship when Zuffa merged it into the UFC. Hominick is the guy hoping to bring about a sudden coup d’état.

Since this is Aldo’s inaugural trip to the Octagon, let’s take a moment to review his pedigree. The Brazilian knockout artist has only a single loss in 19 professional bouts. It occurred less than a year into his professional fighting career. 65 months and 11 fights later, Aldo has morphed himself into a man that many believe ranks among the best in the sport, pound for pound.

Watch the tape of his knockout victory over Cub Swanson. You will quickly get the point. The fight lasted all of eight seconds, and that included the time it took for the fighters to touch gloves after the referee signaled for the action to begin. Aldo followed the sign of respect by uncorking a flying double knee. Game over.

Seven of Aldo’s eight WEC opponents succumbed to strikes inside the distance, with former champ and promotional poster boy Urijah Faber being the only man to last the distance with Aldo. Even though the fight went the full 25 minutes, it was about as one-sided as a fight could possibly be without resulting in a stoppage.

Hominick is no slouch in his own right. The Canadian-based fighter is riding a five-fight winning streak, stopping four of those five opponents with strikes. He is a very crisp, technically proficient striker with lightning-fast hands and he looks to showcase those standup skills at every opportunity.

To that point, Hominick and his renowned standup coach Shawn Tompkins both claim that he will engage the man purported to be the division’s most savage striker in a battle on the feet. If that is the case, then the record-setting crowd at Rogers Centre in Toronto, Ontario will be treated to either a sudden, highlight-reel knockout finish or some of the best back-and-forth standup action of the year—maybe both.

If Hominick wants to score the upset on April 30th, he needs to make good on his claim of engaging Aldo on the feet. Calculated aggression will be the challenger’s best friend.

Hominick doesn’t want to stand on the outside and engage in a strike-for-strike battle with Aldo. He may believe that he has a hand speed advantage, but he falls short when it comes to kicks.

Aldo is a master at using kicks to both control the distance and score damage. Against Faber, the champion knew that that he needed to avoid the takedown in order to maximize his chances at defeating the former collegiate wrestling star and put on a clinic on how to control the distance with lightning fast leg and body kicks. His lower body attacks were so effective that he scored multiple knockdowns from leg kicks, something rarely seen at the highest level of MMA.

Aldo can do the same thing to Hominick or anyone else, for that matter, because he is so dangerous with his hands. Opponents often choose to sit back and focus on slipping his punches, which opens the door for thudding inside leg kicks and kicks to the body.

Hominick can eliminate that weapon by closing the distance behind the jab. He needs to lead the 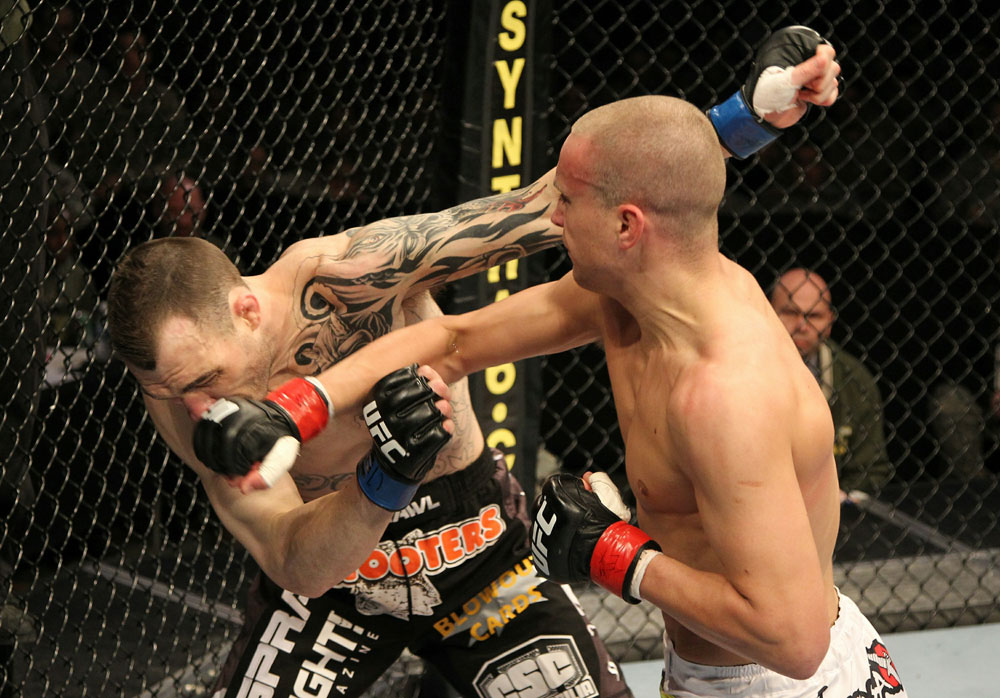 action with his left hand, rather than waiting to react to an Aldo punch or kick. Trust me. It is far easier for the champion to fire kicks when he is standing at a comfortable distance than when the action is restricted to a phone booth.

Of course, making it a fight in a phone booth brings into play the champion’s sick knees and destructive punches. Hominick is probably comfortable taking his chances there. As a highly trained kickboxer, he is at ease fighting on the inside. The Canadian also carries devastating power in his own punches, so if the action devolves into a slugfest, it may very well be a question of who lands first. Again, I’m guessing that Hominick likes his chances in that scenario.

Most will point out that the weakest part of Aldo’s game is his guard. True. Yet, that doesn’t mean Hominick should expend his energy and focus on searching for a takedown. If one presents itself, he should jump on it like a kid on a trampoline.  He should not risk running into a flying knee or otherwise unnecessarily exposing himself diving in for a takedown because that is probably the weakest part of the challenger’s game.

Hominick should, therefore, remain focused on winning the fight on the feet. That means moving inside behind the jab and once inside, firing both of his hands in an all-out firefight. Don’t fire wildly. Remain calm and throw with precision and technique, but he should definitely take some calculated risks in that scenario. As great as Aldo has been since his lone career loss, nobody has truly tested his chin with a USDA prime bomb. Hominick brings those to the cage.

Aldo probably expects Hominick to come in looking for the takedown, just like every other opponent. If not, he expects the challenger to go that route as soon as he feels his power. Again, I don’t see that happening, so Aldo had better be prepared to use his legs to keep the fight at somewhat of a distance because he is taking unnecessary chances fighting on the inside against a guy with Hominick’s standup pedigree.

Aldo knows that he is an elite finisher. But he also should know that he is not the same fighter moving backwards as he is when he is fighting as the aggressor. Few fighters are effective fighting backward. Chuck Liddell and Anderson Silva are the only two strikers that immediately come to mind as being equally effective throwing shots coming forward or moving backward. It is a gift that few athletes in MMA or boxing possess. Aldo isn’t one of them.

He should expect Hominick to try and force him to retreat. The champion can combat that by employing good lateral movement and firing off of angles when Hominick attacks. Aldo has the speed, skills and grit to win a fight in just about any scenario. When he fights tactically, those advantages become close to insurmountable hurdles.

Aldo should rely on a heavy dose of leg kicks to maintain the distance. When Hominick attacks, he should step to his left and fire his right hand right down the center. If it misses, the Thai plumb is his next best option, assuming the challenger works his way to the inside.

If neither is working, Aldo should keep his hands up and retreat. Reset the distance. Focus on leg kicks.

It suffices to say that Aldo is the rightful favorite entering this matchup. It is also an accurate statement that Hominick is probably the sternest test of his UFC/WEC career, assuming the challenger fights with controlled aggression.

I would not be surprised to see an upset in this one, but I’m not predicting it. I’m instead picking the champion to put his stamp on his UFC debut and stake further claim to being one of the best in the game, pound for pound.