The Blueprint: Aldo vs. Edgar 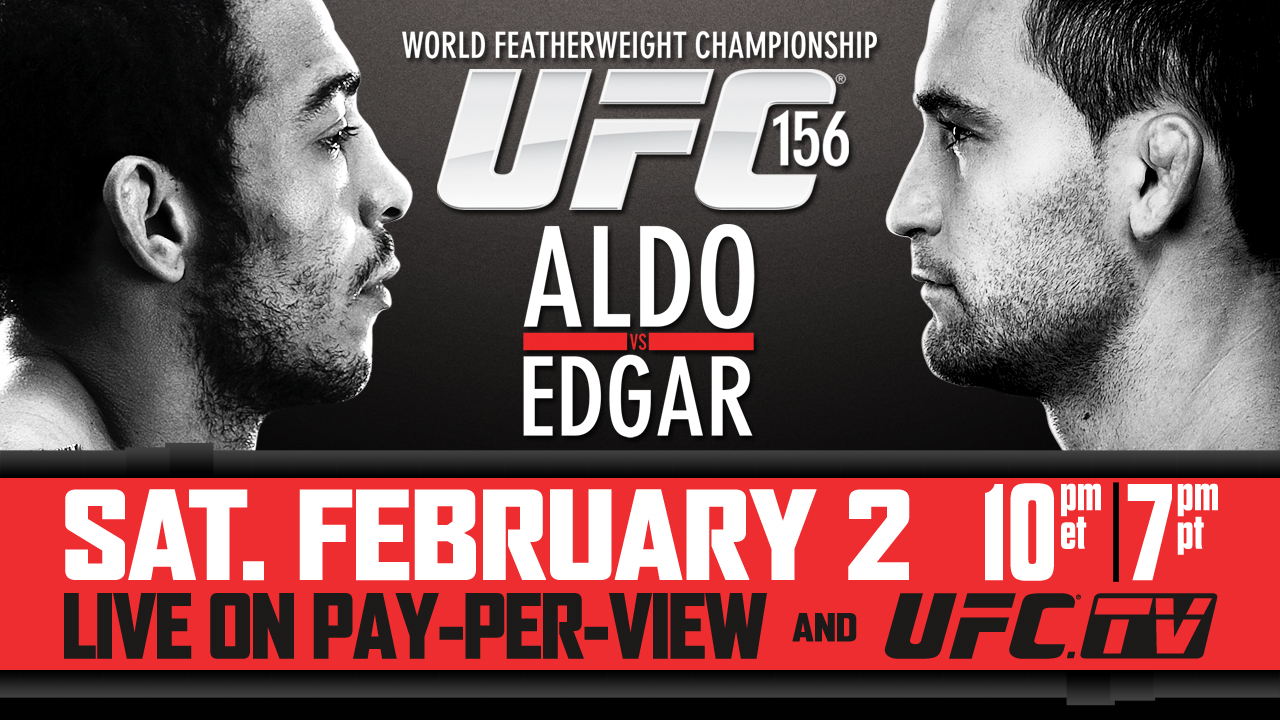 Fighters don’t ordinarily receive a title shot in their debut at a particular weight class.

Frankie Edgar, however, is anything but ordinary.

The newly slimmed down version (call him Edgar 2.0) is the former UFC lightweight champion. He is the man who dethroned legendary champion BJ Penn, and then dominated the all-time great in an immediate rematch. He is a guy who, after 18 professional fights, only has one true conqueror—reigning champion Benson Henderson. The only other man to defeat him, Gray Maynard, got crushed in their third bout. It was the Knockout of the Night and could have been Knockout of the Year.

The interesting thing about Edgar’s drop to featherweight is the fact that he has always been a natural featherweight. He is one of the few champions in recent UFC history, outside of heavyweights, of course, who didn’t cut weight for his bouts. As a result, he often faced guys who weighed 10 or more pounds heavier than him come fight time, including Penn.

That feat, in and of itself, qualifies Edgar for pound-for-pound greatness.

After back-to-back losses to the significantly larger Henderson, Edgar will finally make his debut 10 pounds to the south. It is a weight class that he should have been competing in since it was first established in the UFC. The weight cut won’t be difficult. In fact, he will probably still be the smaller man come fight time. But at least the size differential won’t be as extreme as what he is used to.

By all accounts, Edgar’s featherweight debut should be an easier proposition than the life he faced competing at lightweight.

The only problem, of course, is his debut is coming against Jose Aldo.

The reigning featherweight champ sits firmly among the top four pound-for-pound fighters in the sport today, alongside unquestioned king Anderson Silva, close second Georges St-Pierre, and heir apparent Jon Jones. Aldo’s relative ranking against those names is open for debate.  His presence in the discussion is not.

Aldo hasn’t lost a fight in more than seven years, dating back to November 26, 2005. He has defeated a who’s who of the division during that 14-fight run. Kenny Florian. Chad Mendes. Urijah Faber. Cub Swanson. Manny Gamburyan. Mark Hominick. Mike Brown. Just to name a few.

Now it is Edgar’s turn. For the second time in his last three fights, Aldo will face a man who recently dropped down to featherweight from one division to the north in an attempt to find UFC gold. The last man, Kenny Florian, suffered a solid beating.

Will Edgar suffer the same fate?

The best game plan for Aldo on Saturday night is the same one he used against Faber back in 2010, which means dishing out a heavy dose of kicks.

Aldo is a master at using kicks to both control the distance and exact damage. He knew that he needed to avoid the takedown against Faber in order to maximize his chances at defeating the former collegiate wrestling star. While Edgar is also an extremely strong wrestler, he uses it more defensively than offensively in his fights. I don’t expect that to change on Saturday night.

Instead, Edgar will come out fighting just like he always does, which means a ton of lateral movement as he hunts and pecks throughout the fight. Aldo needs to use heavy leg kicks and lightning-fast kicks to the body to help slow Edgar’s movement to present a more hittable target.

Aldo’s lower body attack was so effective against Faber that he actually scored multiple knockdowns from leg kicks, something rarely seen at the highest level of MMA. He can do the same thing against Edgar.

Aldo delivers his kicks with such insane speed that they are unbelievably difficult to time and catch. Edgar probably assumes that is the best way to defend that strike, possibly using the move to take the fight to the ground. That means he will stay in the pocket, at least initially, to see if he can catch a kick. That decision will prove futile against the best leg striker in the division.

Moreover, Edgar dropping his hands in an unsuccessful attempt to catch an Aldo kick opens the door for a one-punch knockout loss.

Not only is Aldo the best puncher in the division; he is one of the best in the sport. He has true show-stopping power in his fists, particularly his nuclear right hand. What makes his right hand so effective is his ability to feint with a kick and then unleash a right hand bomb in seamless succession.

That reality will keep Edgar guessing when Aldo throws a kick. Sure, Edgar can merely lift his left leg to check the strike while putting his hands over his face in defense. But that basically turns him into a heavy bag, since he is completely out of position to counter.

Plus, covering up in that fashion isn’t foolproof. One can’t protect all areas at the same time. Instantly covering up when a kick is coming means Edgar must guess correctly. Is Aldo shooting the punch down the center? Is he looping it a bit to the jaw? Is it aimed for his temple? Or is it a left hook?

Any one of those can turn out the lights.

Once Aldo’s kicks start to land, Edgar will become more and more stationary, which creates more and more opportunities to land big punches. And that, of course, increases the odds of a win by knockout or a terrific beating en route to a unanimous decision.

That is the fight in a nutshell from Aldo’s perspective, but there are two sides to every coin. Edgar isn’t showing up as a sparring partner. He is coming to win, so he has his own keys to victory.

For Edgar, the fight begins and ends with remaining unpredictable. That is his single key to victory.

On the feet, he needs to continually change up his angles of attack and punch combinations. Dart in with a single jab before rolling out to the right. Dart in with a one-two combination before exiting left. Lots of head movement. No kicks, not unless they finish fistic combinations. Aldo is too good at countering kicks.

But most importantly, Edgar needs to convince Aldo that he is looking for a firefight on the feet and use that to get the fight to the ground.

Let’s not forget that, as good as Aldo is in defending takedowns, Mark Hominick scored multiple takedowns against him in their bout. He was able to succeed where others failed because of his willingness to stand in the pocket and trade with the champion.

Hominick is an expert striker, so standing and trading with Aldo wasn’t a crazy idea. Edgar is nowhere close to Hominick in terms of his ability to stand and trade with standup killers. Doing that with Aldo is nothing short of career suicide. But he is equally good at executing a hunt-and-peck strategy.

If Edgar can remain committed to movement and ever-changing angles, Aldo will get frustrated with his inability to find the former champion. This guy has a thirst for thrilling the crowd in spectacular and explosive fashion. He thrives off utterly destroying an opponent.

If Aldo is struggling to find his opponent, something he really hasn’t experienced in the UFC, the odds are that he will begin to press with harder and harder shots. Personal safety is always an afterthought, because Aldo is the type of fighter who believes that the best defense is non-stop offense, so I don’t see him becoming more technical if the crowd becomes restless. He will become more aggressive.

That is just what the doctor ordered for a takedown. Edgar can dart in like he is about to throw a combination and then change levels under an overly aggressive Aldo counter. That is probably the only way that Edgar gets the fight to the ground, absent a flash knockdown or an uncharacteristic mistake by the champion.

Once the fight hits the ground, Edgar needs to remain busy with his ground and pound in order to keep it there.  Aldo is a Brazilian Jiu-Jitsu black belt, but Edgar’s submission defense is so good that he won’t have much to worry about on the ground, other than Aldo working back to his feet.

The one thing Edgar must avoid doing is standing up and diving in with punches, like he did in his first fight with Henderson. Not only does that open the door for Aldo to pop back to his feet. It creates opportunities for an upkick to the grill, something that cost Edgar the fight in his first bout with Henderson.

In addition to remaining unpredictable, Edgar must set a furious pace to the fight. Aldo cuts a tremendous amount of weight, so his ability to fight five hard and fast rounds is always a question. He is just fine over 25 minutes, if he is controlling the pace. But things may be different, if Edgar is the one pushing the action.

Plus, the last time Aldo fought on the heels of an injury, he showed up woefully out of shape because of the difficulty in getting his body down to the 145-pound limit. That is a very real possibility on Saturday night.

In either scenario, it is likely that Edgar will have the conditioning advantage. This guy is among the best in the sport at impersonating the Energizer Bunny. His gas tank is endless, and that is something he can leverage to beat Aldo or anyone else, if he fights the perfect fight.

On the surface, this fight has Aldo written all over it. But I’m not counting out Edgar. He was a tremendous underdog against Penn. That didn’t matter. Grey Maynard should have destroyed him in the rubber match, by all accounts. Nope. Try again.

Why should Saturday night be any different?

Because of Edgar’s ability to rise to the occasion againt seemingly insurmountable odds, I look at this fight as a veritable toss-up. The only outcome that would shock me is a knockout win by Edgar. Anything else is almost equally possible, in my mind.

Yet, if I’m forced to pick, I have to go with the champion. Aldo may very well go down as the greatest featherweight of our generation. He certainly holds that distinction today.