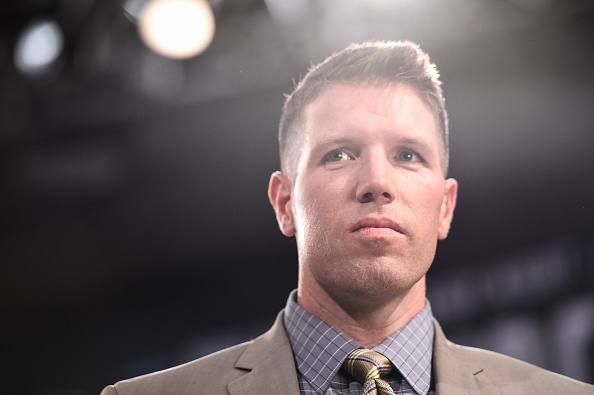 In the spring of 2017, Brendan Fitzgerald walked into a Los Angeles studio for an audition.

The Ithaca College grad cut his teeth in Casper, Wyoming, before stints in a small Texas market and his hometown of Boston led him to a studio anchor position with “ESPN U.”

He hadn’t done much play-by-play work in the past and had never immersed himself in the world of mixed martial arts, but an opportunity is an opportunity and he attacked it with gusto.

On June 3, 2017, Fitzgerald was paired with retired MMA standout Yves Edwards on the call for four bouts in the middle of the UFC 212 fight card from Rio de Janeiro, Brazil. When their four outstanding fights ended and the audition was wrapped, Fitzgerald walked away unsure if he’d get the chance to call another UFC fight in the future.

“Coming away from it after doing the audition, I knew that I could be good at it — I knew that I had the ability to do it and do it well — I just didn’t know if I would get that opportunity because there wasn’t another chance; you either get it or you don’t,” said Fitzgerald, who entered the audition less prepared and less confident than he would liked to have been. “The reason why I didn’t think I would get it is because the thing you want as an on-air broadcaster is to feel confident in what you’re talking about.

“I thought I just kind of flubbed a couple things, but luckily they edited together the auditions to be ‘Here’s everyone’s best stuff’ and my best stuff was good enough to get me here today.”

Another angle of the majestic beard on @felderpaul. @ufc
A post shared by Brendan Fitzgerald (@brendanfitztagram) on Aug 29, 2018 at 2:40pm PDT

Not only was Fitzgerald’s best stuff good enough to land him the gig, but it came with an immediate opportunity as well.

Six weeks after calling his first fight ever, Fitzgerald was posted up inside the Ultimate Fighter gym, stationed alongside UFC lightweight Paul Felder to call the action on the second week of Dana White’s Tuesday Night Contender Series.

Launched the previous week, the summer UFC FIGHT PASS series dropped five pairs of emerging talents into the cage in front of the UFC President and matchmakers Sean Shelby and Mick Maynard. After each collection of fights, the group would determine which fighters would earn an opportunity to compete on the biggest stage in the sport.

While the series, which has now completed two successful summer runs and will graduate a handful of talented prospects to the UFC roster, it’s greatest value thus far has been in serving as an intensive internship and launching pad for a collection of new on-air talent for the promotion, including Laura Sanko, Felder and Fitzgerald.

“The Contender Series was a perfect vehicle for a lot of things,” offered the veteran broadcaster, who has garnered rapid acceptance and heaps of praise from the notoriously fickle MMA community since his debut last summer. “It’s the perfect vehicle for Dana & Co. to find new talent; for these fighters to make a splash as they jump into the scene; it was perfect for me and obviously it has been great for Laura and Paul Felder and, this summer, Michael Bisping. It has been such an amazing platform for so many different aspects of the sport.”

And he was immediately hooked.

“I remember texting a good friend of mine after my first Contender Series, which was Week 2 of the first season, and I just knew right away that I might have found something here. I really loved it and I felt like I was really good at it right away,” said Fitzgerald. “I’m sure if I went back and looked at it, I would cringe a hundred times, but to have the Sean O’Malley finish as part of my first experience and to see where he’s gone and to have a highlight moment like that right at the beginning was like a drug and I got hooked on it right away.”

Calling live sports is infinitely harder than it looks on television and the challenges are even greater when you’re venturing into a new arena for the first time.

While Fitzgerald had the tools to navigate his way around the booth and the microphone skills needed to convey the action to the audience at home, his familiarity with the sport and the men and women stepping into the Octagon on a weekly basis wasn’t as deep as his knowledge of the stick and ball sports he’d covered during his journey from Wyoming to “The World Wide Leader.”

So he started devouring everything he could about the sport — watching every event, studying its history, learning who’s who, what’s important and why while paying special attention to the mechanics of the broadcasts.

Early last December — just six months after walking out of his audition unsure if he’d get the job — Fitzgerald called his first live event in Fresno, California and followed it up with three more assignments in the next two months.

“It’s been huge,” he said of getting thrown into the deep end in the late stages of 2017 and early part of this year. “Let’s compare it to something else: if you want to learn how to play guitar, you sit down and take a guitar lesson. If you don’t sit down with a guitar for another three weeks, you’re not going to get very good, so the steady work rate is just how it works with anything and it certainly applies to this job and it applies especially to something you’re new at.

“If you pour yourself into it, you can make a lot of progress in a short amount of time, but it’s a curve,” Fitzgerald continued. “I’m not making as much progress from fight-to-fight now; I’m still getting better and I still have a long way to go, but there’s a curve that levels off.

“But to get Fresno and then a month later St. Louis, two weeks later Belem, Brazil, two weeks after that Austin, Texas — those are four cards in the span of two-and-a-half months, which was incredible experience to get right away. After Austin, I think my next one because the schedule got light was in Atlantic City in April, so I had two full months off and it took me a few fights in Atlantic City to be like, ‘That’s right; this is how it goes. This is what we do.’ I like to stay busy so I can stay in it, but certainly, that experience off the top was huge and so important for me.” 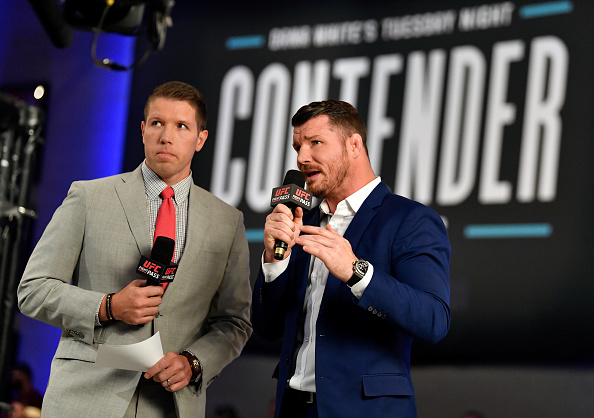 Still in his rookie season with the UFC, Fitzgerald will be back on the call when the Octagon makes its first appearance in Moncton, New Brunswick next weekend, and while his initial campaign in the booth has been an undeniable success, there is still a great deal he wants to continue working on throughout the rest of this year and into his sophomore campaign on behind on the mike.

“I’m still finding the balance as I’m coming into these events knowing a lot more about these fighters that I’ve now called a few of their fights; like Eryk Anders — I’ve called three of his fights already,” laughed Fitzgerald, who was in the booth for the former Alabama linebacker’s bouts against Lyoto Machida, Tim Williams and Thiago Santos this year. “Part of that is if you know a lot, you can say a lot, but my job shouldn’t change. Just because I know more about these fighters, doesn’t mean I have to talk more. I’m learning that.

“I try to be as prepared for every broadcast as I can be, but with that UFC Lincoln card, I knew a lot about a lot of those fighters going into that card and I feel like I was a little wordy and I was trying to say too much because I knew a lot more about each of the fighters. I need to have all the knowledge that I can and continue to build all that, but only apply it and share it when it makes sense to do so. I think that will be my next challenge.”

Mostly, he wants to use the next 15 months to continue visiting destinations he wouldn’t otherwise have seen while expanding his knowledge about the sport and its athletes, honing his approach to calling the action and continuing to deliver the kind of clean, consistent broadcasts that have allowed him to go from being a UFC newcomer to earning fan favorite status in less than a year.

“(The next 15 months will) take me to a lot of different places; I don’t know the schedule, but I know I’ll log the miles and I’m happy to do it,” said Fitzgerald. “It’s been such a cool part of the job to see all these places that I would never go. I don’t know if I would have ever gone to Santiago, Chile if it wasn’t for calling a UFC event there and other places I will go in the future.

“I am going to focus on continuing to build my skills to become better and better. I’m just focused on learning doing the best I can and continuing to grow; not being happy with a great start and thinking that I don’t need to keep learning and keep improving. I want to make it even better so that the fans can love it as much as they always have.”

You can catch Fitzgerald next Saturday, October 27, on the call for UFC Fight Night: Volkan vs. Smith from Avenir Centre in Moncton, New Brunswick, Canada.