Bloodied Theodorou set to put on a beating

It was the greatest night of Elias Theodorou’s professional life, but as a rational young man, he had to inject some reality into the situation after defeating Sheldon Westcott for The Ultimate Fighter Nations title in April of 2014. So he took his parents to the side, away from the post-fight festivities.

“It may have looked easy,” he told them. “I may have done a great job and we’re all celebrating here, but you’ve got to remember that there was someone on the other side of that, and that one day could be me.”

Fighting streaking Brazilian bomber Thiago “Marreta” Santos, Theodorou was on the other side for the first time, suffering his first pro defeat via unanimous decision. It was a tough fight and a competitive one, but it still stung, especially with his parents in the crowd at The Cosmopolitan in Las Vegas. 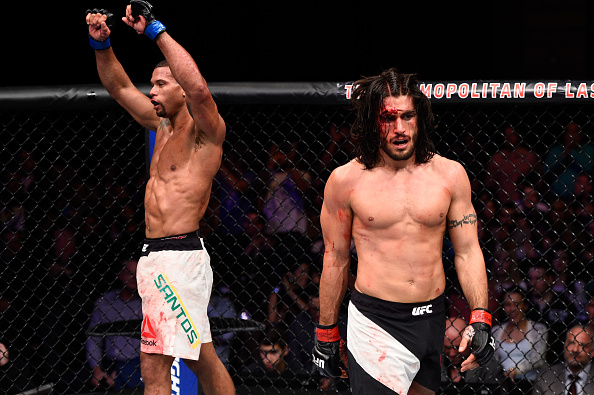 “I gave both of them a heart attack during the fight, but once I got stitched up, I came out to show them that I was fine and they were the first to say how proud they were,” Theodorou said, laughing when recalling his father’s response.

Making that walk to the Octagon alone marks any fighter as courageous. If you don’t think so, try it out yourself. But the rest of the world usually isn’t convinced unless you survive a war or – at the very least – look the part. Theodorou doesn’t fit the flattened nose, missing teeth, scar tissue over the eyes stereotype of a prizefighter. He has modeled for romance novel covers and is the self-proclaimed owner of the best hair in MMA. Not to feel bad for someone better looking than most of us, but he did have to deal with a difference kind of prejudice throughout his career. It didn’t bother him, though.

“That was always a good thing on my side, especially in the early fights,” he said. “Pardon my French, but I even heard people say, ‘Oh, look at this pretty f**k, we’re gonna smash him.’ And it didn’t work that way. I think in many ways, going 12-0, not to sound arrogant, but I made it look easy. I never lost a round and never lost a fight beforehand, but when s**t hit the fan, I was still looking to win.”

That was the biggest takeaway from the Santos fight. His face masked in blood thanks to a cut that required 30 stitches to close, the Toronto middleweight battled it out for 15 minutes with one of the biggest punchers in the division.

“I proved to myself and others, but most importantly to myself, that I don’t quit,” Theodorou said. “He hit me with a lot of shots, and at no point did I surrender. At no point did I not want to be there. I was looking to win. And I know what I have in my back pocket – a hell of a chin.”

He’s also got a memory of the fight.

“Luckily, the old adage says, ‘Chicks dig scars,’ so I walked away with one of those.”

He laughs, but the 28-year-old knows he’ll have to put that chin on the line once more this Saturday against “Smile’N” Sam Alvey in the UFC FIGHT PASS featured bout in Ottawa. Or maybe not.

“In many ways, I think the pace I will put will wipe the smile off his face,” Theodorou said. “He wants to be happy, but my style won’t make him happy. I’m not going to fight the fight that he wants.”

But he’s going to fight, and to get him ready for this weekend, he’s been going to Montreal to work with the Tristar squad.

“Whether you win or lose, you’ve got to go back to the drawing board and add to it,” he said. “But with my first loss, I had to definitely change things up a bit. It was an honest reflection.”

That doesn’t mean he’s going to stop his love for traveling, though. After the Alvey fight, he’s going to go with his parents to Europe, and as they go off to enjoy their retirement, he’s going to punch and kick some folks in Amsterdam for a month.

“(The loss to Santos) will never change my desire to have that fighter’s journey, that traveling identity,” he said. “That part of me is always gonna be there, but in many ways, Tristar’s my new home too.”

And he’s not going anywhere. Win, lose or draw, Elias Theodorou is a fighter.

“I’ve always known what this sport is – the good, the bad and everything in between,” he said. “It’s not always going to be an amazing thing, but it’s something that I love.”