Blaydes' Plan to Obtain the Belt Remains the Same

"I look forward to getting the belt using my wrestling and forcing the casual fan to appreciate wrestling or just find another sport to watch"
By Thomas Gerbasi • Nov. 23, 2018

Curtis Blaydes’ head hurts. No, he didn’t have a rough day in sparring on the lead-up to his Saturday main event against Francis Ngannou. Instead, the Chicago native gets that throbbing in his noggin thinking about the current state of the title picture in the UFC’s heavyweight division.

“It’s impossible to project,” said the No. 3-ranked Blaydes. “There are a lot of variables and a lot of unknowns. At this point it kind of hurts my head to try and project. There are too many outcomes.”

He’s not wrong. Champion Daniel Cormier is expected to walk off into the sunset next year, with his final fight projected to be former champion Brock Lesnar. Then there’s another former champ in Stipe Miocic, the possibility of Jon Jones ultimately making the leap from 205 pounds, and even rumors of Anthony Johnson coming out of retirement to fight at heavyweight.

Yep, all those moving parts can give any contender a headache. So what’s someone like Blaydes to do? Focus on what’s in front of him and nothing else, and all that matters for Blaydes is his rematch with Ngannou, one that he knew was going to ultimately take place as soon as their first bout in April 2016 ended.

“Yeah, I knew it was gonna happen,” he said. “It was inevitable. In every post-fight interview, everybody always asked me about that and I always gave them the same answer: it’s gonna happen eventually.”

In that first bout, a competitive fight ended after two rounds when the Octagonside physician intervened, resulting in Blaydes’ first and only pro loss. Considering that he’s gone unbeaten in six subsequent bouts, you would assume that the first thing on Blaydes’ to-do list was a little payback, but that wasn’t the case.

“I’m not one of those guys that lose any amount of sleep over something in the past,” he said. “It happened, he beat me and I always hoped and felt that I would have a chance at redemption. But had he retired and we never had a chance to fight again, I could live with that.”

So no picture of Ngannou on his mirror to look at for motivation every morning?

“Absolutely not,” he laughs.

If you haven’t figured it out by now, the 27-year-old has a different approach to the fight business than most, and it’s a refreshing twist.

“They think fighting runs your life, but it doesn’t,” Blaydes said. “I can be happy outside of the gym. I can find happiness in other things and I still find time for myself. I like to play video games, I like to watch Netflix, I like to eat, and as long as I can do the basics, I’m happy.”

He’s also embracing the role of father to his daughter, who was born this summer, giving the heavyweight standout even more motivation to get to the top. And it all continues with the rematch against Ngannou, who has hit a rough patch that saw him lose back-to-back fights against Stipe Miocic and Derrick Lewis. The defeat against Miocic could easily be written off as too much too soon for the Cameroon native, but against Lewis, his lack of offense shocked fight fans. 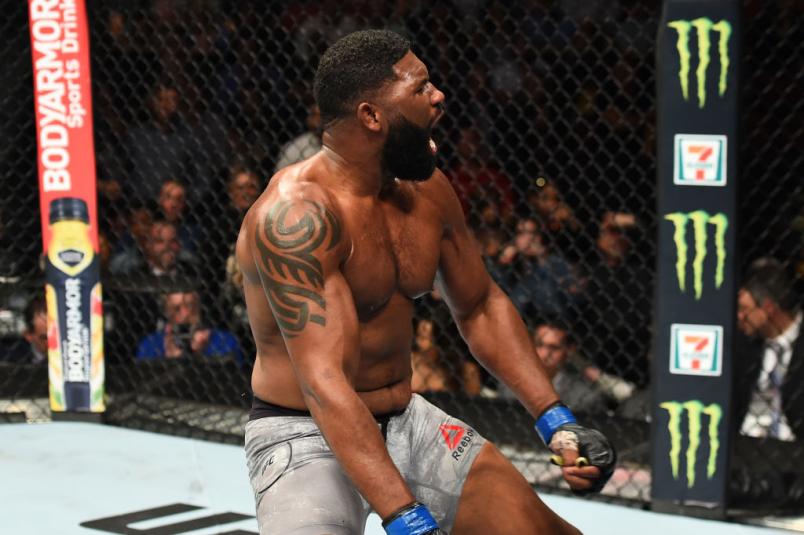 CHICAGO, ILLINOIS - JUNE 09: Curtis Blaydes celebrates after defeating Alistair Overeem in their heavyweight fight during the UFC 225 event at the United Center on June 9, 2018 in Chicago, Illinois. (Photo by Josh Hedges/Zuffa LLC/Zuffa LLC via Getty Images)

CHICAGO, ILLINOIS - JUNE 09: Curtis Blaydes celebrates after defeating Alistair Overeem in their heavyweight fight during the UFC 225 event at the United Center on June 9, 2018 in Chicago, Illinois. (Photo by Josh Hedges/Zuffa LLC/Zuffa LLC via Getty Imag

So if that guy shows up in Beijing on Saturday, how will Blaydes react?

That’s confidence, and while Blaydes’ standup is dangerous, the former junior college national wrestling champion makes no bones about his intentions on fight night, and it’s worked like a charm in his most recent wins over heavyweight superstars Mark Hunt and Alistair Overeem. Those victories took Blaydes from prospect to contender, and they will always mean something big to the Windy City product.

“The majority of the haters harp on my wins against those guys by pointing out that they looked old,” Blaydes said. “I guess it’s all in your perspective. You could call it a changing of the guard or just see it as me getting to beat up on old guys. I happen to believe it’s the former, but a lot of people also believe it’s the latter. Regardless, I am happy that I was able to beat two of the legends of the sport. I’m proud of myself.”

He should be. He’s a fighter who has earned his place in the rankings, and he’s willing to keep putting in the blood, sweat and tears to keep that place this weekend and improve it in 2019. And he’ll do it his way.

“I don’t plan on changing my strategy and I actually look forward to getting the belt using my wrestling and forcing the casual fan to either have to learn to appreciate wrestling or just find another sport to watch,” said Blaydes.