Curtis Blaydes was on the precipice of title contention heading into his showdown with Francis Ngannou in Beijing, China last November.

More than two-and-a-half years removed from their first meeting, the two heavyweights were headed in opposite directions. Ngannou entered off back-to-back losses, the first to heavyweight champion Stipe Miocic and the second a perplexing, action-less affair against Derrick Lewis six months later.

Blaydes hadn’t lost since that April 2016 fight in Zagreb, Croatia, which was his first in the UFC. He was unbeaten in his last six and had won four straight, including a lopsided decision win over Mark Hunt and a punishing third-round stoppage win of perennial contender Alistair Overeem five months earlier at home in Chicago at UFC 225.

The former NJCAA national champion was on a roll and a win over Ngannou would have put him in good shape to challenge for the heavyweight title at some point in 2019.

The fight was over just 45 seconds after it started, Ngannou having connected with a fierce, sharp series of blows that put Blaydes down and prompted the referee to step in.

In offering his thoughts on the bout on Twitter in the early morning hours after the fight, Blaydes offered no excuses, just an acknowledgement of what transpired, a comment on the nature of the sport and a promise for the future.

“Sometimes you win. Sometimes you lose. When you’re going against another highly skilled athlete, anything can happen; that’s why this sport is exciting and watchable as it is — you never know what’s going to happen.

“That day just wasn’t my day.”

Roughly four months have passed since that night in Beijing and as is custom, Blaydes is once again poised to step into the cage.

Through his first eight UFC appearances, the longest the 28-year-old has gone between fights is the six months between his first loss to Ngannou and his victory over Cody East in his sophomore appearance in the Octagon. He’s averaged just under four months between fights, a trend which continues as he readies to make the walk to face Justin Willis in the co-main event of the UFC’s return to Nashville this weekend at Bridgestone Arena.

“I don’t think it’s make or break, it’s just something I like,” he said of the developing pattern. “I like to get in there every couple months, after I’ve had a month to really think about what happened in the last fight.

“Regardless of whether it was a win or a loss, I like to have a month to analyze the things I did well and the things I didn’t do well. After that, I like having 12-week camps — that way I know I’ve done the proper amount of preparation and work that needs to be put in to get the win.”

Even with his loss to Ngannou in November, 2018 was clearly a breakthrough campaign for Blaydes, as he registered the two biggest victories of his career and headlined his first UFC event. Reaching those milestones transformed the Elevation Fight Team member from a prospect to a contender and put a bullseye on his back.

After starting his career chasing the biggest fights possible and being the one calling out established names in hopes of expediting his climb up the rankings, Blaydes is now the one being called out.

“It’s a little different,” Blaydes said of being called out by someone looking to change their place in the division at his expense. “I knew it would happen eventually, going from being the hunter to the hunted, but I’m ready for it.

“I expect for guys to be looking to make a name off me now because I’m legit. They know that if they beat me, it makes them legit, so I’m prepared for that.” 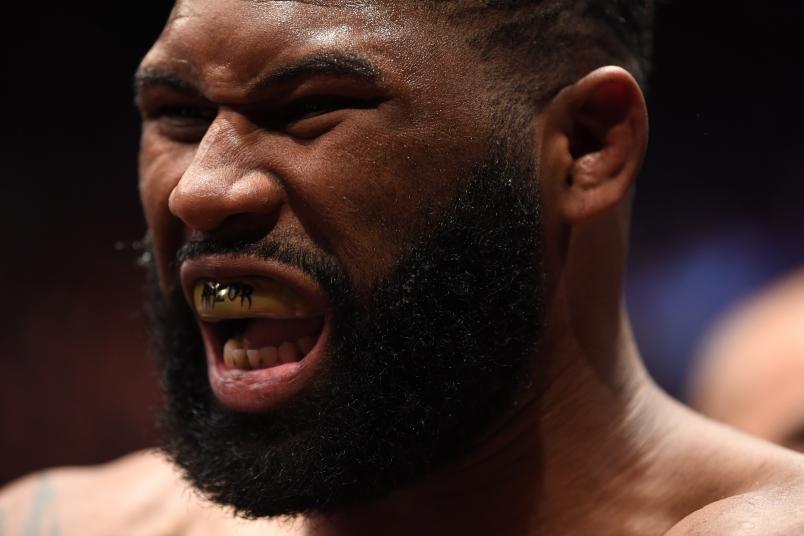 That’s the approach Willis took to make this matchup with Blaydes come together.

Fresh off his own unanimous decision win over Hunt in early December, the American Kickboxing Academy product set his sights on Blaydes and Alexander Volkov, a pair of Top 5 talents coming off losses. Brandishing an eight-fight winning streak with the last four of those wins coming inside the Octagon, “Big Pretty” sought to take another step up the division ladder in his first start of 2019.

He asked, the UFC offered, and Blaydes obliged.

Now, just a few days before they lock horns, the hungry contender is quick to acknowledge that his surging foe is obviously talented and backed by a standout team, though neither of which will be enough to secure him a victory on Saturday.

“He has a strong left hand and he likes to use it a lot,” said Blaydes, beginning his assessment of what Willis brings to the table this weekend. “He has alright footwork. He doesn’t seem to be extremely athletic, but not a lot of heavyweights are, so I’m not going to hold that against them.

“I respect him. He’s a heavyweight. He’s going to have power and he trains at AKA, so that means he has good grappling partners between Cain and ‘DC,’ so we’re expecting him to be a decent grappler.

“Overall though, I see myself as the better fighter,” he added. “I’m longer, I’m more athletic and I know I’m the better wrestler. I think I check off all the requirements to win the fight. I think I beat him in every area.”

While Willis enters on a lengthy winning streak and with an unblemished record in the UFC, ending his unbeaten run in the UFC isn’t a key motivating factor for Blaydes, as he knows that it will take more than a win over the 10th-ranked heavyweight to get him back into the championship mix.

But with fighting for the title by the end of the year as his goal for 2019, Blaydes knows he needs to get back into the win column this weekend in Nashville in order for that to happen and that’s precisely what he plans to do.

“I think every win is valuable because it goes down on your record, but do I think me beating him will improve my chances for a title shot? No, I don’t think so,” he offered. “I’ll probably need another bigger name after this fight.

“(As for this weekend), I get it done the same way I have in all my other fights: using my boxing, using my feints, using my footwork to get inside safely without having to eat anything too dirty and once it gets on the ground, it’s muscle memory.

“I don’t think he gets up once I get him on the ground.”