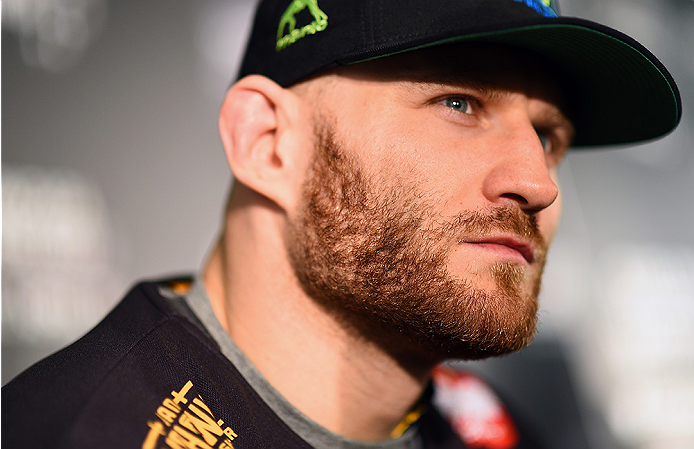 Like most visitors to Las Vegas, Jan Blachowicz couldn’t resist taking a picture or two when he was in town for the most recent UFC Fighter Summit in June. One photo in particular was prophetic for the light heavyweight prospect, even if he didn’t know it at the time.

“I took a photo in front of the MGM Grand Arena, saying ‘I will do everything to fight here.’ And what happened now? I am fighting here,” Blachowicz said through translator / manager Dorota Jurkowska. “The dream’s come true; it is an amazing feeling to fight where the best fighters in the world are fighting.”

The Polish native’s big fight on the big stage takes place on Saturday when he meets former Ultimate Fighter winner Corey Anderson. It’s a main card Pay-Per-View bout, Blachowicz’ first as a member of the UFC roster, and while there is all the requisite pressure that comes along with a fight of this magnitude (which also doubles as his first outside Europe), you can’t wipe the smile off the 32-year-old’s face when he discusses this weekend’s matchup. In essence, it’s not just a chance to perform for a wider audience, but to erase the memory of his last fight, a decision loss to Jimi Manuwa that snapped his six-fight winning streak.

“I will be a completely different fighter than during my fight with Manuwa,” Blachowicz said. “I hope Corey is prepared one hundred percent, because I am. I’m sure that the fans won’t be bored during this bout and they will remember it for a long time.”

To get to that level of preparedness, Blachowicz supplemented his usual work at home with some time at the renowned Allstars Training Center in Stockholm, where he met up with an old foe – Ilir Latifi – and a future world title challenger – Alexander Gustafsson.

“I started my training with Allstars in Sweden,” he said. “I was helping Ilir to prepare for his fight and I was also training with Gustafsson. However, 90 percent of the preparation I spent in my hometown gym Ankos MMA Zapasy Poznan.”

With the thermometer approaching the 100 degree mark in Las Vegas, you may wonder if a summer in Europe can replicate the desert heat. And nothing can truly do that, but Blachowicz believes he is ready for his first fight in the U.S.

“We were training earlier during the day, because I will be fighting early on Polish time,” he said. “That was the only adjustment, because the weather in Poland was really similar to the one in Vegas. It was really hot and dry. Besides that, I was training the same as always, wisely and hard.”

He also believes that he found out what went wrong against Manuwa in April, and he’s corrected it.

“I have learned the lesson,” he said. “I know what I did wrong and I am not going to make the same mistakes again. What I improved during my preparations you will see on the fifth of September.”

The UFC obviously didn’t hold the defeat against Blachowicz, putting him on the big Labor Day weekend event in Vegas. He was even scheduled to face recent world title challenger Anthony Johnson before “Rumble” got matched up with Manuwa and Blachowicz got Anderson.

“I was surprised,” he said of the switch, “but all is not lost that is delayed, and I know that the time for the fights with guys from the top will come.”

This fight might work out even better for Blachowicz in the long run, as he is facing an opponent in Anderson who is long on talent but short on top-level MMA experience. That’s something the veteran plans on exploiting this weekend, even though he does respect Anderson as a dangerous foe.

“This is really important,” he said of the experience factor. “I think because I am that experienced in Octagon, nothing can surprise me. That is definitely my advantage in this fight and I’m sure it will help me to win this fight. Corey is a solid opponent, but there are no weak opponents in UFC. I have done my work one hundred percent, and I have covered all aspects of the fight. No matter where the fight will be, I am ready to beat him in any situation.”

After that, it will be back to Poland and some more time with his passion away from MMA – The Witcher 3 video game.

“It is the best game ever,” Blachowicz said. “Playing it is like a getaway for me. Man cannot live by bread alone. (Laughs) The Witcher is a form of a retreat. I will defeat Corey Anderson in the Octagon, the way the Witcher defeats all the monsters in the game.”