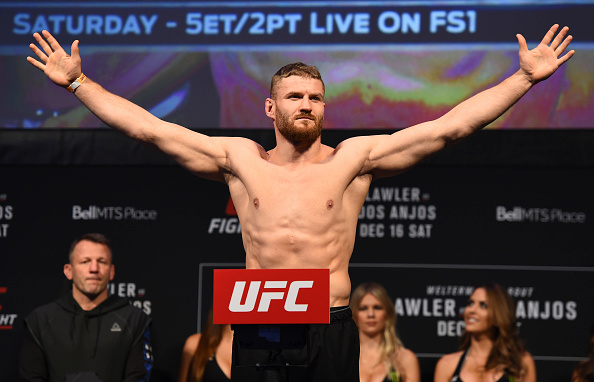 Jan Blachowicz of Poland poses on the scale during the UFC Fight Night weigh-in on December 15, 2017 in Winnipeg, Canada. (Photo by Josh Hedges/Zuffa LLC/Zuffa LLC via Getty Images)" align="center" />
It wasn’t the rematch Jan Blachowicz expected, but getting the chance to avenge his 2015 loss to Jimi Manuwa this Saturday in London is certainly one he’s happy to get.

“It (the rematch) happened, so I’m happy,” said Blachowicz, who dropped a unanimous decision to Manuwa in Krakow. “Like I’ve said before, I’d like to rematch with everyone who I lost to. So I cannot wait to step into the cage and fight against Jimi again. I’m going to be a completely different fighter than in our first fight. He is also a different fighter now, so it will be a better fight for people to watch.”

At the time of their first fight, Blachowicz was riding a six-fight winning streak that included a knockout of Ilir Latifi in his UFC debut. On the other side of the Octagon, Manuwa was coming off the first loss of his pro career against Alexander Gustafsson, and going into the Cieszyn native’s Polish backyard. But the Londoner pulled off the unanimous decision, with the leading storyline heading into the rematch being that Blachowicz is the only fighter Manuwa didn’t defeat by knockout or submission.

“The pressure is on his side, not on mine,” said Blachowicz of going to Manuwa’s home turf this time, having already proved that he can take the thunder of the “Poster Boy.” “That’s good for me. I don’t care who he knocked out because he didn’t do it to me.”

But is Manuwa the hardest puncher Blachowicz has faced?

“MMA fighter? Maybe. But I’ve fought better boxers and kickboxers than him in training. I felt his punches, of course, but I fight with guys who hit harder than him.”

The loss to Manuwa began a rough 1-4 stretch for Blachowicz, a two-year run that had some questioning whether the Polish standout could make it to the top of the light heavyweight division in the UFC. But after a close majority decision loss to Patrick Cummins last April, Blachowicz pulled off wins over Devin Clark and Jared Cannonier, and just like that, he was back in the top 15 rankings and now he has a co-main event fight that could keep him moving up the 205-pound ladder.

So was this coach, Robert Jocz, happy to see him back? 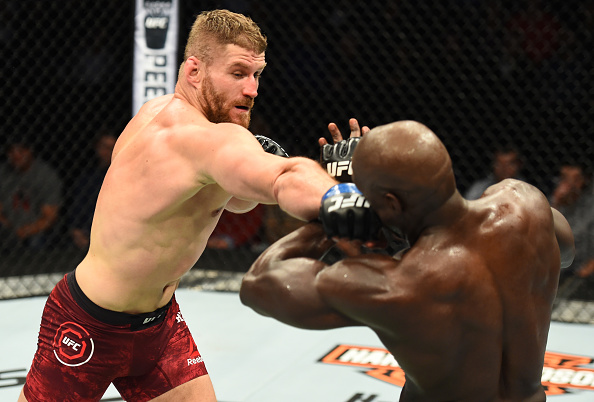 “Yeah, of course,” he said. “We’ve got a really good gym now in Poland, I think one of the best in Europe. He’s happy, I’m happy, everyone is happy in our gym.”

Now Blachowicz and Jocz reuniting makes sense when it comes to explaining the 35-year-old’s resurgence, but I have another theory, and it’s that after finishing the third installment of his favorite video game, The Witcher, he now has more time to train.

“Maybe,” he laughs. “I’m not in the game anymore; I’m back to real life. But The Witcher was a monster killer, so for me, Jimi is a monster and I have to – not kill him – but I have to beat him.”

So what is it about the character Geralt of Rivia, created by Andrzej Sapkowski and immortalized in books and video games, that hit a nerve with Blachowicz?

“In the USA, you’ve got Spiderman and Superman,” he said. “In Poland we’ve got The Witcher. He’s the best superhero of all-time. The books are great, the video game is the best in the world right now and now Netflix is making a show. This is one of my favorite heroes from books and games.”

Now Blachowicz has to be his own superhero this weekend at the O2 Arena. And with a win, he will set up an interesting rest of 2018, one he’s not ready to speculate too much about right now.

“Maybe they’ll hire me as an actor for the show,” he laughs.