BJ Penn - They Only Made One

“I want to thank all of the fans for their love and support. I’m going to take some time off to enjoy life, train and teach. I will keep you guys’ posted with what’s next.” - BJ Penn 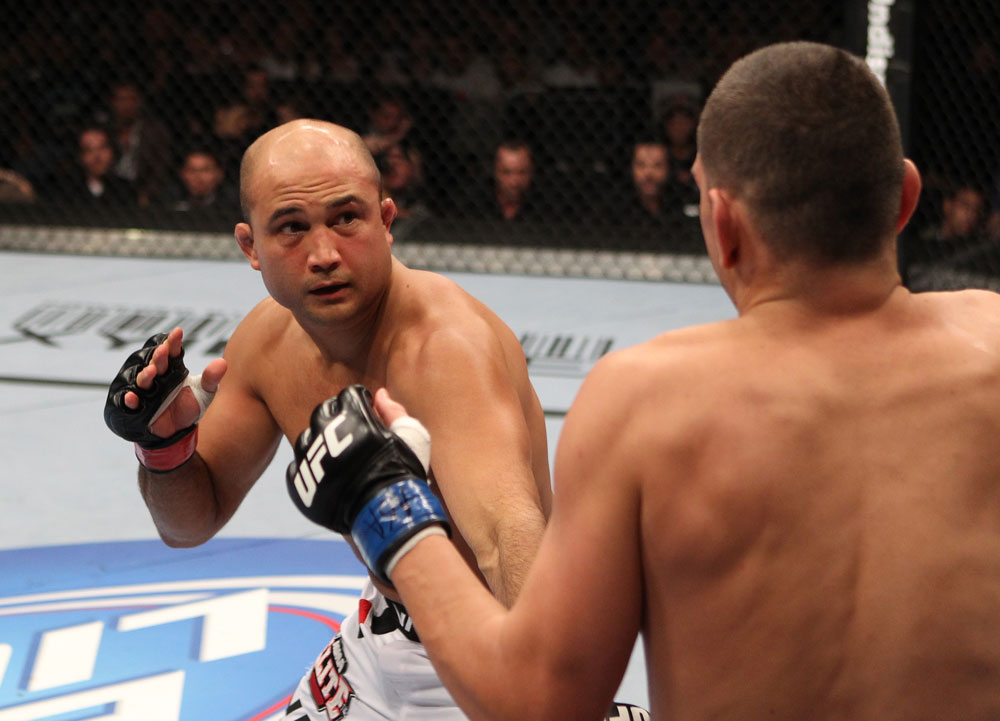 “Hats off to Nick Diaz, he’s the man. Joe, it’s probably the last time you’re ever going to see me in here. I can’t keep, uh, I want to perform at the top level. That’s it, Joe, I’ll shake your hand right here. I’ve got a daughter (and) another daughter on the way. I don’t want to go home looking like this. I’m done.” – BJ Penn, speaking to UFC commentator Joe Rogan immediately following his unanimous decision loss to Nick Diaz at UFC 137.

Needless to say, those heart-felt comments from a physically exhausted Penn, his left eye badly swollen and nearly shut, blindsided most spectators, especially the man holding the microphone and asking the questions.

A haggard-looking BJ was just a few minutes removed from having absorbed and weathered the worst beating of his famed 10-year career. Yet the Hawaiian hero is only 32 years old. He is still in his physical prime, still a crowd-pleasing headliner, still in possession of some of the slickest boxing and Brazilian jiu-jitsu skills in the fight game. So his spontaneous declaration inside the Octagon, if BJ does indeed make good on it, would make him a notorious exception to the laws of probability: To my vast recollection, the number of legendary UFC fighters who have voluntarily walked away from the sport age 32 or younger is … ZERO.

The enigma that is BJ has always walked to the beat of his own drum, so you can never discount that he will become the first to break the mold. But a great many fans, in keeping with the natural skepticism of many reporters and fans who have witnessed too many pro fighters flip-flop on retirement vows, will only believe in a BJ Penn denouement if they never see the former two-division world champ fight again over the next few years. Indeed, two days after his 15-minutes of riveting reckoning with Diaz secured Fight of the Night honors, Penn himself seemed to subscribe to the school of thought that fighters – like people in general – should refrain from making decisions while consumed by raw emotions or while the fresh wounds of battle make it hard to rise out of bed in the morning or scamper to the fridge.

“I want to thank all of the fans for their love and support. I’m going to take some time off to enjoy life, train and teach. I will keep you guys’ posted with what’s next,” was what Penn wrote on his Web site, BJPenn.com, on Monday.

I’ve seen a lot of gifted fighters up close. And if I endeavored to rank which fighters are must-see every time they fight, no matter who the opponent is, I’m not sure whom I would peg in the No. 2 slot. But the guy who consistently and always delivers as the No. 1 fighter-as-entertainer is easy: My vote goes to BJ Penn. Unequivocally. Without hesitation, no need for deliberation.

I don’t have a Hawaii birth certificate and have no ties whatsoever to the Aloha State. Fortunately, you don’t need to hail from the nation’s 50th state to have been emotionally moved time and again by the former lightweight and welterweight world champion, who was game to fight anybody – even going up three weight classes to take on 205-pound Lyoto Machida. The baby-faced Hilo fighter, Hawaii’s most popular and adored athlete, alongside Philadelphia Phillies All-Star center fielder Shane Victorino, never needed a Fight of The Night bonus check as incentive to leave it all in the cage. BJ just always brought it. Straight from the heart. That was the one certainty with him – whether he stepped into the cage shredded at 155 pounds or slightly bloated at 170 pounds, whether fighting on a full tank or on fumes, he always came to throw down and to take the other guy out. He “brought it” despite the fact that everything else about his training camp preparation, diet, etc., was usually a humongous question mark leading up to his fights.

You know the questions that always shadowed him: Which BJ will show up? How hard did he train for this fight? How much longer does he want to fight? Is his heart still in it?

Penn has often been cast as a supreme athlete, with uncanny fight instincts, who never quite poured 100 percent of himself into fight preparation. Yet every time this guy fought, electricity filled the arena. He never backed down when the fists were flying, never backpedaled, never stopped trying to finish a fight. And he never ran from an a—whipping if he had to be on the receiving end once his cardio had betrayed him. And, in my mind, even before he ever stepped into the cage, Penn (16-8-2) was a force to behold. For my money, his walkouts are among the three or four best in the sport’s history, neck and neck with Matt Hughes and Chuck Liddell.

As I’ve often said, many times in sport (and in life) the anticipation of THE  MOMENT can actually be as compelling and gripping as THE MOMENT itself. BJ Penn embodied the power of anticipation. His walkouts to the late Israel “IZ” Kamakawiwo’s hybrid anthems of “E la E” and “Hawaii 78” are so visceral and palpable. You can feel in that moment, while witnessing his accelerated swagger toward the cage, that he is not only fighting for himself, out of personal pride, but for the pride of all his people. BJ is to Hawaii what Manny Pacquiao is to the Philippines. Only Hawaii has just 1.35 million people, versus 92 million for the Philippines. BJ is the Hawaii fans’ ambassador, a representation of their ferocious will. It is a role that differentiates him from nearly all other fighters, who fight for their own fulfillment and dreams. With BJ, despite a rather privileged upper class upbringing, it is always as if he had showcased extra heart because he would much rather suffer tremendous physical agony than disappoint his people, his fans. Even when his legs went wobbly in the Octagon, even when his heart-rate shot up and lactic acid overwhelmed his muscles – as they did in contests against Georges St-Pierre, Jon Fitch and Diaz -- he dared not let his fellow Hawaiians down. He dared not quit, even when his not-quite-in-peak-shape body screamed for him to quit.

So you must understand that when BJ walks to the cage to “Bruddah IZ,” it is a particularly emotional experience for his sympathizers, who view him as a brother, a loved one. Those songs hold deep symbolic meaning to the Hawaiian people, signifying unity and a preservation of their proud island culture during times when outsiders tried to take their lands.

“When that song plays, every Hawaiian in the house stands up and it gives you chicken skin. BJ lifts everybody’s spirits up,” said Blaise Soares, a 36-year-old Hawaii native who is a former pro boxer and Golden Gloves champion. “BJ Penn is the biggest name in Hawaii culture. Hawaiians love MMA because fighting is something we’ve been doing since we were in diapers. We all learn how to fight in the backyard with the boxing gloves or wrestling. People love BJ because he brings it. He brought the fight to Diaz. There were a few moments where I thought the fight might get stopped, but BJ just kept coming back, which prevented the referee from stopping the fight. But it hurt me to see him take so many punches, the big shots. I think that took a lot out of (our) people.”

It was a battle between two stallions who should be the poster boys for the slogan, “Let’s Scrap.” BJ Penn had to be transported to the hospital for treatment immediately following the fight, so he could not attend the post-fight press conference, which featured Dana White making a very poignant observation about what had transpired in the cage.

“In the 10 years we’ve all seen BJ Penn perform and fight,” White said, “you’ve never seen BJ Penn get busted up. He got busted up tonight, let me tell you.”

That “leather skin,” as Dana called it, could not withstand the nearly 260 strikes unleashed by Diaz – an extraordinary volume of punches. While Diaz’s punches often appear to be moving in slow-motion, those blows inflict much more damage than often meets the eye because of the tremendous snap and whip Diaz puts on them – enabling him to not just land “arm” punches, but to also put the force of his body weight behind them. Those are the kind of punches that can split even a fighter with “leather skin.” While BJ had claimed Diaz was a near mirror image of himself, the difference in the all-out war of attrition was that Diaz has the limitless cardio of a Triathlete.

There will be naysayers who criticize Penn for his at times questionable work ethic, the fact that he did not appear as obsessive or disciplined in all facets of his training as some other elite pros. There is the prevailing perception, even among his most ardent defenders, that BJ could have given more to his art. That he should have left Hawaii more frequently for better training camps, that he should have dieted more stringently throughout his career. So, despite two world titles, and a BJJ black belt world title, it is possible that we never really saw the Best B.J. there could have been. Yet what Penn MIGHT HAVE accomplished should not detract from all that he ACTUALLY accomplished. He was such a sponge, such an instinctive wonder, a one-in-a-million natural fighter and entertainer. In fact, his perceived flaws are perhaps part of the reason so many people empathize with him. There is a vulnerability that emanates from BJ and his aura. He does not fight like a stoical machine, as some do, but as an emotional human. He is impulsive. There is an unpredictability about him. You never really know what the guy is going to do next (even when he says he’s retiring!).

Personally, I prefer my fighters emotional, with a chip on their shoulder, as if they’re out to exact some revenge for something disrespectful you said. That was BJ Penn. A BJJ wizard who often preferred to beat the other guy up standing and excelled at it. He made you pick your poison.

BJ’s legacy is bulletproof. Two wins over Matt Hughes, triumphs over Sean Sherk, Kenny Florian, and Jens Pulver and Takanori Gomi in their primes. You could also make a strong case that BJ deserved to get the nod in his first fight against St-Pierre (which Penn lost via split decision despite inflicting more damage on the Canadian).

If he does return, my best guess is it’ll be at 155 pounds. BJ is 1-3-1 in his past five fights and seems better suited when he has defined abs and is competing against guys his own size. Some day the UFC will host a show in Hawaii, and maybe we’ll see 60,000 plus people in an outdoor stadium. Wouldn’t it be awesome if BJ was on that card? How could he resist being on that card?

It is fitting that one of the sport’s most enigmatic figures again has the rest of us guessing. His opponents in the cage often had no idea what was coming next. Once again, nobody knows BJ’s next move.

“BJ Penn will always be a legend to the people of Hawaii,” Soares said. “Hawaii has a lot of up and coming fighters and there will be another Hawaiian champion someday. But I don’t think there will ever be one as big as BJ Penn.”

Relive Some Of The Greatest Knockouts In Women's Flyweight History