"Nobody’s on top always. We’re up one day, we’re down one day, and that’s just the nature of life. And when they see me, they can really relate." 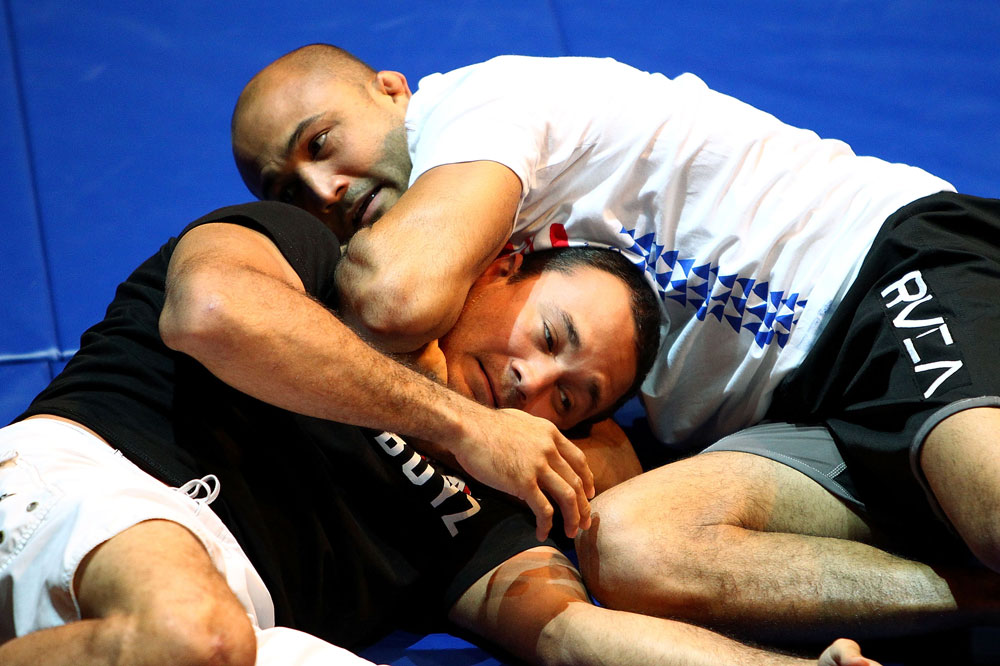 Two consecutive losses. For some it’s the beginning of the end. For others, it’s a challenge. BJ Penn had his back against the wall as his return to welterweight against Matt Hughes approached last November, but he knew that no matter what happened in the Octagon, he would always have his family around him. So during the time in the locker room when the doubts and questions inevitably appear, he turned to his brother JD.

“JD, you know what, times have been tough lately for us, but I don’t care if I win or lose, I just want to show everybody why I started doing this,” said Penn to his older brother.

“BJ, I could care less if you win or lose too,” JD responded. “Go show everybody who you are.’”

Following that brief moment between siblings, BJ Penn, “The Prodigy”, one of only two men in UFC history to win titles in two weight classes, began yelling for UFC site coordinator Burt Watson to unleash him on Hughes.

Penn laughs about it now, saying “Even people in the locker room were getting scared.”

The UFC Hall of Famer never had a chance as Penn ended their trilogy with a 21 second knockout. As pure shock value goes, it was Penn’s most spectacular win since he knocked out Caol Uno in 11 seconds in November of 2001 and followed it up by immediately running out of the Octagon and back up the ramp to his locker room. Nine years later, after a long quest to capture that lightning in a bottle again, he knew what to do.

“I’ve been trying to do a fight like the Uno fight for the last nine years and it just never came out that way,” said Penn. “So when this fight ended up ending very quick with a knockout, I was pumped up, I started screaming in the ring for a little bit and I was like ‘here it is, here’s my chance. I’m gonna get out there and I’m gonna do it – Elvis is gonna leave the building.’”

Penn laughs, recalling what happened next as he was stopped near the press table by his cornermen.

“A couple of my cornermen were like ‘wait wait, you gotta run back in there and say your sponsor’s name.’ And as soon as they said that, of course that’s something that I have to uphold as being one of their fighters, and also I had to show Matt Hughes the respect. You don’t walk out of the ring on someone who’s done so much for the sport. You go back in and you show him respect. So as bad as I wanted to leave the building, I’m very happy that I came back.”

It shows you how much things have changed since Penn first arrived on the UFC scene as a precocious 22-year old. Not the respect part, because that’s always been there, but the fact that mixed martial arts has become big business. Sponsors, advertisers, major media conglomerates, and television networks are part of the game now, and fighters have had to evolve in the Octagon as well as outside of it. Penn has done his part, and he’s got the championship belts to prove it, but like Vitor Belfort, he will always have a diehard fanbase that points to the 22-year old Penn as the definitive version of “The Prodigy,” with everything that happened in the ensuing nine years just gravy.

“I think they buy the Pay-Per-View when I fight and I think they’re constantly looking for that same kid that got them excited about the sport, who came out and said all these things, and maybe it didn’t go his way every time, but he tried as hard as he could to back up what he said,” said Penn. “They see they guy who knocked out Din Thomas and knocked out Caol Uno and that’s their guy, that’s their favorite fighter, and maybe they see some of him in their lives or maybe he’s someone that inspires them.”

Penn, now 32, has earned that fanbase and level of respect, and yes, he’s had his ups and downs, but he always comes to fight. So even when arrows were being shot at him after his back-to-back losses to current lightweight boss Frankie Edgar last year, he still had a core group of fans that were always there to rush to his defense. What’s the secret? Why BJ Penn and not someone else?

“I’m still wondering about that myself,” he smiles. “I’ve just been so blessed with these fans that always have my back. When I’ve lost and I’ve come back, I think they know my story so well and they relate to it in their lives. Nobody’s on top always. We’re up one day, we’re down one day, and that’s just the nature of life. And when they see me, they can really relate. People like to follow that storyline and sometimes they like to see people fall but climb back up again.”

Right now, with a UFC 127 headlining gig against Jon Fitch approaching this weekend, Penn is on the upswing, but all it takes is one loss to start the whispers again. So to keep the naysayers at bay, Penn switched things up a little bit in camp, bringing in Hughes – yes, the same Hughes he just finished a trilogy of fights with – to help him prepare for the wrestling of Fitch. That move came as a shocker, almost on the same level as Penn training and burying the hatchet with old rival Jens Pulver after their 2007 rematch.

“I could see it surprising a lot of people, but honestly, I consider myself a people person,” laughs Penn. “One minute I could be pissing you off, the next minute you could be hugging me, and that’s me and part of why people love me or hate me. I’m just blessed to get to run into these people later on and really get to apologize for some of the things that I’ve done. And I’m lucky that these people have welcomed me with open arms.”

Hughes’ presence in this camp provided Penn a master class in what is finally getting some recognition as the toughest part of mixed martial arts to master – wrestling. And for Penn – one of the game’s best over the years - to admit to needing some extra work in that department shows you just how important it is to ensure continued success in the modern game.

“The thing about wrestling is that it’s very rough,” said Penn. “I don’t want to say it’s not technical because it’s just as technical as jiu-jitsu is, but it’s something that has to be hammered into a human being from a young age and you keep going from there. It really is a hard thing to pick up. Wrestling is not easy. In jiu-jitsu, it’s everything that wrestling is not, and so is kickboxing. And wrestling is everything that jiu-jitsu is not and so on. It’s a tough sport, you’ve got to be a tough guy to wrestle, and it’s tough to learn. If you don’t start it from a young age, you don’t have the right muscles built up to be able to do the positions. You’ve got to have a strong back and a strong neck, so if you didn’t build those up while you were doing jiu-jitsu and building your flexibility and your legs and moving different, by the time you go and try to start wrestling, your body’s not gonna be conditioned to do the movements and you’ll get burned out and beaten mentally from it, and you just won’t have a good time.”

That’s probably the key right there. Wrestling is not a good time. It’s a grind, it’s hard work, and unlike jiu-jitsu, where you can tap somebody out, or striking, where you can knock somebody out, there’s no obvious payoff at the end other than knowing after a hard session that you’re better now than you were yesterday. Penn agrees.

Against Fitch, there is no way around it. You can bet the house that the former Purdue wrestler will try to take you down and pound you out. If you can’t stop that, you’ll be in for a long – and losing – night. But if Penn has done his homework and can hold Fitch off and get the win this weekend, he’ll have a shot at the welterweight title staring at him. That announcement from UFC President Dana White came as a shocker to the Hawaiian.

So do Penn’s legions of fans. But whether he gets there again or not, people will always tune in to see him fight, and every fighter wants to have his name on their resume. Being the center of attention and a consistent target would break lesser fighters. Not BJ Penn.

“If I’m not in that position, I’ll be bummed out,” he said. “If someone says ‘you know what, I don’t care about fighting BJ Penn,’ that would hurt my feelings.”