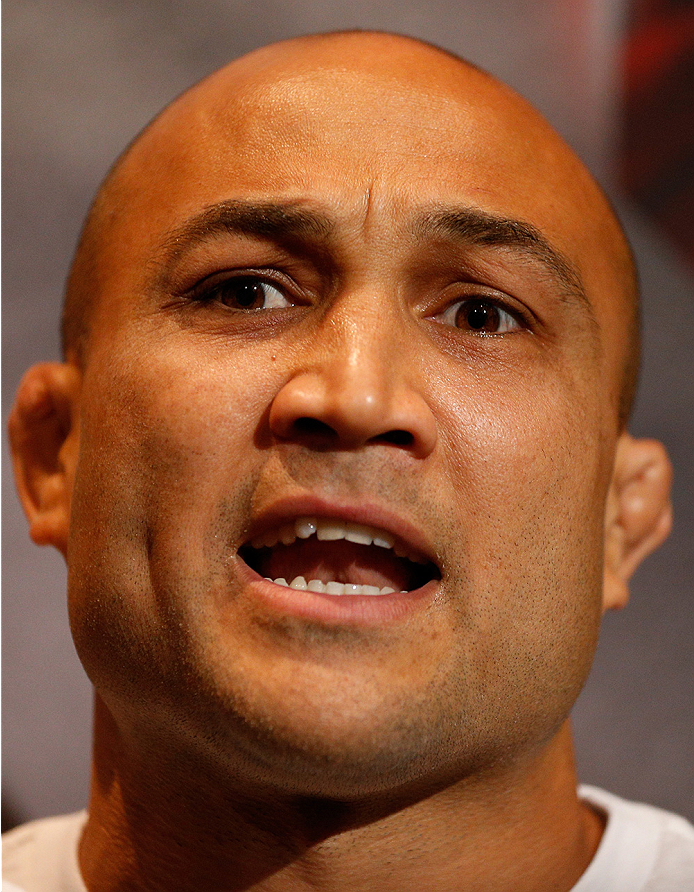 BJ Penn looked bored. There was plenty of action on the stage at the MGM Grand Garden Arena in May as fighters like Ronda Rousey, Chris Weidman, and Chael Sonnen entertained fans who showed up for the press conference to kick off the promotion for this weekend’s UFC 175 / TUF 19 Finale shows.

And you don’t want a bored BJ Penn. You want a fired up “Prodigy” talking about what he does for a living in the way only he can. So having covered Penn extensively over the course of his storied career, I had an idea that involved a reach into my bag of tricks. I simply read him a quote he gave me years ago when I asked why, through the ups and downs of his career, his fans never left him.

He listened intently and then I asked him “is that guy still there?”

Penn smiled and grabbed the mic.

Just like that, Penn wasn’t bored anymore, and neither were the fans that roared when he made his declaration of relevance to the world. It’s the only thing they wanted to see, the fire that epitomized his best performances and made him a two-division UFC champion and one of the most intriguing figures to ever set foot in the Octagon.

Those same fans hope that fire is still burning this Sunday, when Penn returns to the Octagon for the first time since December of 2012 to face a man who has already beaten him twice, Frankie Edgar. To the oddsmakers, it’s a steep mountain for the 35-year-old Penn to climb, especially after losing two straight to Nick Diaz and Rory MacDonald, having a long layoff, and doing it all at 145 pounds for the first time. “The Prodigy” knows all of the above, but facing a stiff challenge never scared him.

“I took a lot of time off,” he said. “I’ve been getting some mixed results in the fighting and I had to regroup, watch the sport, see how far it’s evolved, and come back in, revamp myself and see if I can compete at this level.”

He already hinted at retirement after his one-sided loss to Diaz in October of 2011, but after a similar defeat 14 months later against MacDonald, most believed that they had seen the Hawaiian fight for the last one. Penn was one of those believers.

“After the fight with Rory and losing another decision, I’m sitting there thinking that maybe I made the correct decision the first time,” he said. “Maybe I shouldn’t be here fighting at the top level anymore. I believed I was done after the Rory MacDonald fight.”

But for any fighter, the itch never goes away that easily. Eventually, Penn felt like he was ready to give it one more shot. The goal? Frankie Edgar. But why?

“I just don’t like how my lightweight reign ended,” said Penn, whose two losses to the New Jersey native came in 2010. “Frankie came in and he beat me the two fights, which is an amazing accomplishment on his part. Frankie’s one of the best of all-time and one of the best to enter the UFC, and you’ve got to know that coming in to fight him.”

So those losses haunt him then? He says no, but after a pause, he reconsiders.

“Maybe the fights do haunt me.”

Determined to make one more run at redemption, he called up UFC President Dana White and told him how he felt.

“If I get a few victories, I can fight Frankie Edgar,” said Penn.

White wondered why Penn still wanted to compete, but he also knew how stubborn the former two-division champ could be. He also wanted someone to go against Edgar as a coach on season 19 of The Ultimate Fighter.

“This might be my real weight. We’ll find out.”

We will on Sunday, but more importantly, Penn will find out if he still has the right stuff to fight on the UFC level. “The Prodigy” might be stubborn, but he’s not delusional, and if “it” isn’t there anymore, this might be the last time we see him in Octagon.

Or maybe not, and once again, Penn’s response to such speculation both entertains and intrigues. It’s just his way.

“I could make another run all the way and wipe everybody out, or…I think that’s about it,” he said. “I think we’re going to make a run at this point. There’s not much else to do. Go make a run, go see if we can become the greatest of all time, right at the finish line. Right at the very end.”