“I always felt that me and Nick Diaz was the main event fight. Me and Nick is a great fight, and I knew we were gonna draw some
followers.” - BJ Penn 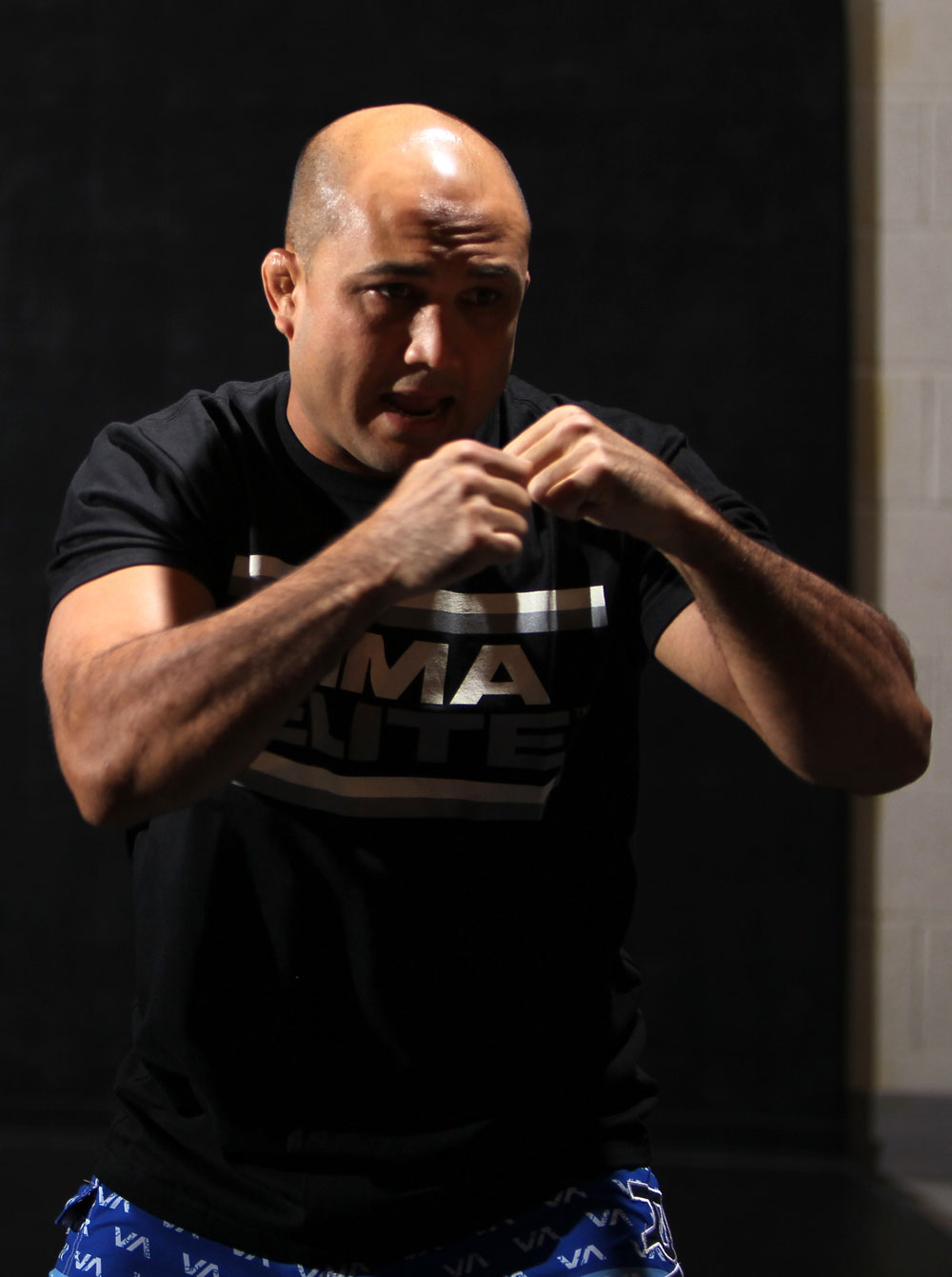 It's been 10 years, 25 fights, and two UFC championships in two weight classes, but BJ Penn has a confession to make. At 32, things don’t get easier for him in the moments before the opening bell.

“I think the butterflies are getting worse with the years,” he chuckles. “I’m surprised on that. I thought it would get easier and easier. I guess it was getting easier for a little while, but now I’m up in my thirties, and I don’t know if it’s because I’ve got kids or what, but it seems like the butterflies get worse. I don’t know why. I’m comfortable, I’ve got a lot of experience, but it just seems that way.”

So when Saturday rolls around once again for “The Prodigy,” he will expect those nerves to kick in, the adrenalin to start flowing, and for the 11th time, he will make the walk to the Octagon as a main event fighter. And that part of it never gets old.

“I remember back when I main evented my first UFC fight against Jens Pulver ten years ago,” said Penn of his UFC 35 title fight with “Lil’ Evil.” “That meant the world to me then. I guess everybody in life, they want to feel self-worth in whatever they decide to do, and it’s the recognition and the excitement. I remember the first time I got that main event, (UFC vet and former Penn coach) Renato Verissimo said ‘whoa BJ, you’re the main event?’ ‘Yeah, can you believe that?’ What a ride. And when I got the news that I’d be main eventing this fight, I thought ‘man, what a great career, what a great life and opportunity I’ve had over the years.’”

It’s almost as if Penn’s getting sentimental about his career and what he’s accomplished in the sport over the last decade. But don’t mistake that trip down memory lane for an exit strategy. Penn, who is coming off a February draw with Jon Fitch, isn’t ready to head to the beach in Hilo just yet.

“I’m 32 and if I could keep winning fights and all that stuff, I think I’m addicted to being in the UFC and I want to try and make this last as long as I can,” he said. “As long as I’m happy. I know it’s easy to get burned out and I’ve talked about retirement and burning out all the time, but I’m trying to enjoy the ride.”

And when you’ve been to the proverbial mountaintop like Penn has, the key to keeping things fresh is to constantly receive the type of matchups that not only make you want to sacrifice and train, but that force you to. Penn’s original foe for this Saturday’s card was former WEC champion Carlos Condit, a fighter on a hot streak who certainly fit the mold of dangerous opponent. But after a crazy series of events that saw Condit elevated to the main event against Georges St-Pierre after Nick Diaz no-showed two press conferences, Penn was without an opponent for the show’s original co-main event.

“At first when it all happened, I thought that Nick was gone from the UFC,” said Penn, “so I was talking to them about maybe putting me and Jon Fitch back together. (UFC President) Dana White told me that Jon Fitch was hurt and out until December, and he said if you want to fight, give me a call. If not, just let me know.”

Then things got even more interesting.

“Then Dana calls back and we end up putting the Nick Diaz fight together,” said Penn, who was now going to face the former Strikeforce welterweight champ who was quickly brought back into the UFC fold. “I know Nick, he’s been a training partner of mine and I get along great with him and his brother. But everybody’s trying to put fights together, and at the end of the day they were looking at their options and we were looking at our options, and the best thing for each guy’s career was to fight each other. This is a job – nothing more, nothing less – and that’s what ended up happening.”

But UFC 137’s musical chairs weren’t finished yet, as St-Pierre got injured, forcing his bout with Condit to get scrapped. What happened next? Penn vs. Diaz was the new main event.

“I always felt that me and Nick Diaz was the main event fight,” said Penn. “Me and Nick is a great fight, and I knew we were gonna draw some followers.”

Oh, they’ve drawn some followers, as the buzz for the main event is getting louder and louder as the countdown to the opening bell continues. Yet oddly enough, it’s not Penn - the usual lightning rod for some prefight drama – who is getting the lion’s share of the attention. It’s Diaz who is the talk of the town, with every utterance from his mouth drawing tweets, message board posts, and fevered analysis. For his part, Penn seems comfortable in this unique role, and as he explains, the fans and media aren’t the only ones with a microscope on the Stockton, California native.

“I’ve kept a very close eye on Nick Diaz’ career,” said Penn. “He’s one of my favorite fighters that I love to watch out there and I think right now, he’s probably the best boxer in mixed martial arts today. He certainly has some fights to prove it. He spars with Andre Ward, he was signed to fight Jeff Lacy, he was considered to fight Roy Jones Jr., and with accolades like that and with the performances that he puts on in the ring, with a high volume of punches and all those things, I definitely think that he’s probably the best boxer in the sport today.”

But when you’re able to deliver praise like that to a future opponent, it usually means one thing – you’re pretty confident in your own ability to defuse your foe’s attack and score the victory. So where does Penn’s confidence come from? Maybe it’s because he’s looking in the mirror.

“We’re similar in a lot of the same ways,” said Penn. “With the boxing, with the jiu-jitsu and with the way are careers have gone. Once in a while we end up clashing with the powers that be, and it just ends up going that way for some reason. There are a lot of similarities between me and that guy.”