Bisping's Back - The Count Halts Le in Four 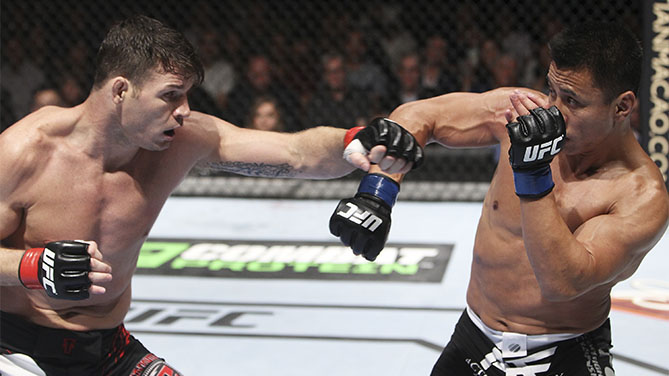 It took five rounds with Tim Kennedy and half a round with Cung Le, but after multiple eye surgeries and questions about his membership among the elite at 185 pounds, middleweight contender Michael Bisping got his groove back Saturday, and once he did, he was unstoppable, as he won for the first time since April of 2013, scoring a fourth round TKO over Le at CotaiArena in Macao, China.

“This is what I’m capable of and I’m capable of better,” said Bisping. “I want to be world champion, I know I have the tools, but I have to back it up and this is the start of backing it up.”
> Watch: Michael Bisping Octagon Interview

Kicks were the order of the day in the early stages, with both fighters using them as range finders first and as damage-inducers next. When it came to punching, Bisping had the edge, with a counter right being his main weapon as Le targeted the body. As the round progressed though, Bisping was the busier fighter, and he was settling into a solid rhythm.

Bisping stunned Le with a left to the eye early in round two, and he poured it on with a series of combinations, bloodying the Californian. Referee John Sharp halted the action midway through to have the Octagonside doctor check on Le, but he was cleared to continue. Le rebounded with two hard body kicks, but a low shot brought a momentary halt to the action. When it resumed, Le upped his work rate, but the damage had been done on his bloodied and bruised face.
> Watch: Fight Night Macao on UFC FIGHT PASS!

Le wasn’t done yet though, and he aggressively pursued “The Count” to begin round three, and it was clear that there was still plenty of snap behind his kicks. For his part, Bisping was patient in his attack, making sure to not walk into anything that could end his night. Le landed a hard left hook with a little under two minutes to go, but Bisping responded with a volume of strikes, keeping things from getting out of hand in his opponent’s favor.

In the fourth, Bisping closed the show, landing with more and more shots on the fatigued Le, and then dropping him with a left knee to the head. A follow-up barrage of shots ended matters, with Sharp stepping in at the :57 of the round.

Now Bisping has his sights set on a bout with fellow contender Luke Rockhold, who he has had words with on social media in recent weeks. 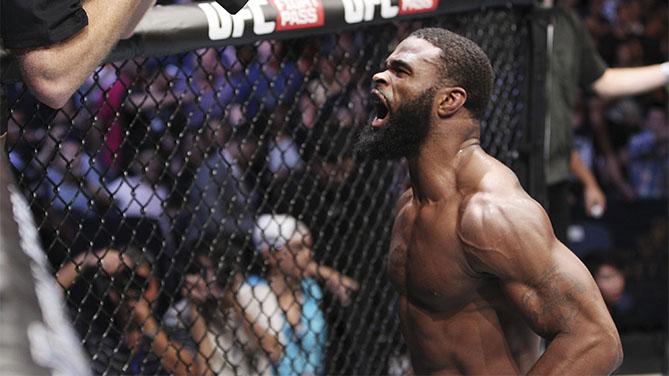 After a disappointing performance against Rory MacDonald in June, welterweight contender Tyron Woodley got back in the win column in spectacular fashion, stopping Dong Hyun Kim in just 61 seconds.

Kim was clearly the bigger fighter, and he went right after Woodley as the bout began. The two welterweights locked up against the fence for a spell, and when they subsequently exchanged, a missed spinning attack by Kim was met by a right by Woodley. Kim fell to the mat and Woodley pounced with rights and lefts, forcing referee Leon Roberts to step in and stop the fight at 1:01 of the first round. 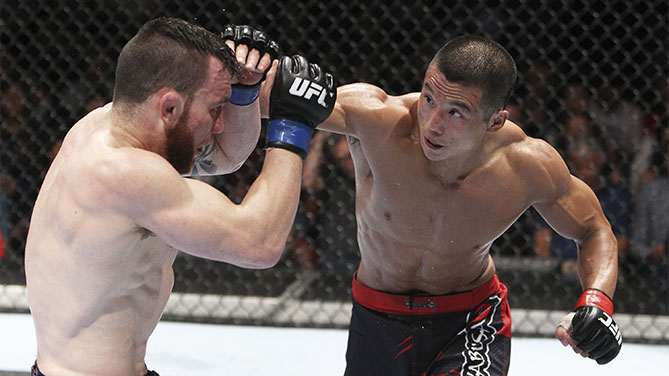 The first round was mainly fought on the mat, with both fighters taking turns being in control, making it a tough stanza to score. Zhang (9-7-1) began to pull ahead in the second, taking O’Reilly’s back as he looked for a rear naked choke. Australia’s O’Reilly (5-1, 1 NC) stayed busy with his punches, but it was clearly the Beijing product’s round, and he kept the pressure on in the final stanza, bloodying the Australian’s mouth and taking his back again. 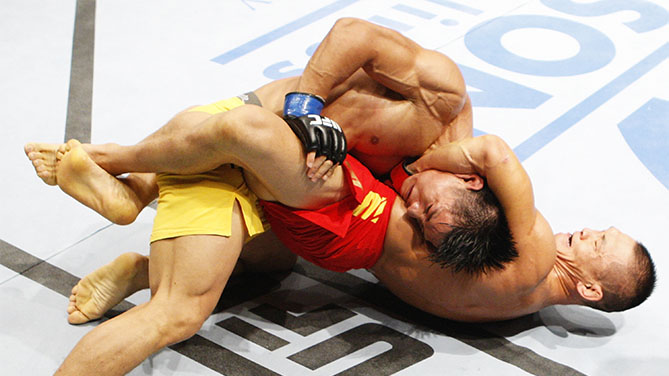 It was far from a fight to remember, but Ning Guangyou made history as he became the first featherweight winner of The Ultimate Fighter China, taking a three-round unanimous decision over Yang Jianping.

Scores were 29-28 across the board for Beijing’s Ning, now 5-2-1; Changde City’s Yang falls to 7-4-1. The bout was originally scheduled to take place in March, but an injury to Yang postponed the match.

After a fast start that saw Ning get the fight to the mat, the action stalled while the two stood, with Ning getting in some hard knees at close range, but that was about it.
> Read the Fight Night Macao Prelim results!

Yang got a little busier in the second, but he was unable to land anything of significance. Ning responded with a takedown, and in a scramble he sunk in a guillotine choke. Yang escaped though, rising to his feet immediately, and the subsequent lack of action got the crowd restless.

Not much changed in the final round, with the exception of Yang landing a series of point-scoring leg kicks. And when the final horn sounded, the crowd let them know their displeasure with the previous 15 minutes.