Bisping views short-notice bout as "a gift from the gods"

Michael Bisping still doesn’t understand what all the commotion is about. To him, taking a fight in Shanghai against Kelvin Gastelum just three weeks after he headlined UFC 217 against Georges St-Pierre in New York City is no big deal.

“I can’t see why I wouldn’t do it,” he said. “Yeah, I was bummed out after losing to GSP and this gives me a chance to get right back in there, hopefully get back in the win column and obviously I get paid again. I’m close to the end of my career so I get to fight again without going through a two-month long arduous training camp.”

You would assume that this is just business as usual for a fighter, but if you’ve been around any combat sport for any length of time, you know it’s not. People like Bisping would have fit in well in the 40s or 50s in boxing or in the formative years of mixed martial arts in the early 90s. Today, he’s a unicorn. But the way he’s always approached his career is that fighters fight. And Michael Bisping is a fighter, so it really shouldn’t have been a surprise when his name showed up as the one replacing Anderson Silva on short notice.

But it was, simply because it’s hard to think of anyone else who would. That’s a badge of honor he takes seriously, and it goes back to his early days in the fight business, where the goal wasn’t to get his own action figure or get a spot in a video game. He wanted to make a life for his family. Fighting was a job and he was good at it, and when I spoke to him in the locker room after he won season three of The Ultimate Fighter, he was ecstatic. Not that he had a new trophy, but that he had a steady paycheck from there on out. So when I asked him if he ever thought about having a Hall of Fame-worthy career at that moment in Las Vegas in 2006, he admits that it was never about that.

“Of course I was ambitious, and you want to be as successful as you can,” Bisping said. “But I don’t think so. I was happy to be there and happy to not be working those dead-end jobs. I felt like I was finally using me to the potential that I was capable of. And that just made me happy. I always thought I was destined for more than working in dead end factory jobs for minimum wage. I was happy that I was able to make a good living for my family, and I was always pushing on. That’s all I’ve ever been doing – just trying to look after my family. I’m trying to take care of my kids the best way I can, and that’s using my fists.” 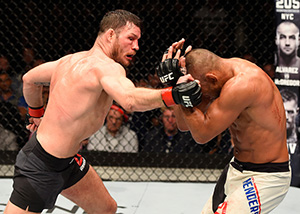 Dan Henderson in their bout during the UFC 204 in Manchester, England. (Photo by Josh Hedges/Zuffa LLC)" align="right" /> More than 11 years later, he’s done more than just take care of his family. He’s tied with St-Pierre for the most wins in UFC history (20), tied with Jim Miller for most fights in UFC history (28), and he’s a former world champion and TUF winner. In 2016, he had one of the great years ever seen in the UFC, as he defeated Silva, Luke Rockhold and Dan Henderson in succession. And while nothing lasts forever, you would assume that the talk of Bisping retiring would have the Brit a little annoyed.

“I guess I started that talk,” he said. “I’m pushing 40, so it’s getting up there and it’s time to do something else in my life. I’m gonna do this one and then I’m gonna do one more in London in March, and then I’ll call it quits. That was gonna be my plan anyway, but this came out of the blue. It’s like a gift from the Gods to me, to be honest. So it (retirement talk) doesn’t bother me at all.”

Is this a kinder, gentler Michael Bisping? Could be. And even if it isn’t, “The Count” has become more and more respected and admired by fans as he comes to the final stages of his career. Who would have seen that coming?

“Over the years I’ve had my fair share of hatred, if you will, but I’ve acted like a jackass and I’ve said things I regret,” he said. “But I’ve grown up over the years. I had a lot of support after the GSP fight and taking this fight I’ve had a tremendous amount of support, I really have, and that’s beautiful. I just hope I don’t continue to put my foot in my mouth the more interviews I do, because that’s typical Michael Bisping. (Laughs) But yeah, it’s nice, it really is.”

He doesn’t even have any trash to talk about Gastelum, a fighter on the rise who Bisping is taking very seriously. 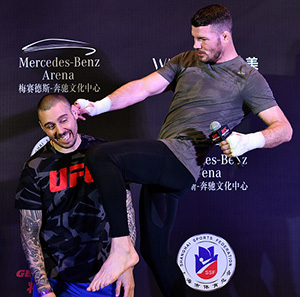 Dan Hardy 'speaks' with Michael Bisping of England after his open workout session inside the Kerry Hotel Pudong on Nov. 23, 2017 in Shanghai, China. (Photo by Brandon Magnus/Zuffa LLC)" align="left" />“He’s a helluva fighter,” Bisping said of his opponent. “He’s young, he’s never been knocked out or stopped, he’s got a big ol’ head, so he’s got a good chin. Great wrestler, good athlete, good speed for his build, good striker. It’s a tough fight, man. I know it is. I’ve got nothing but respect for Kelvin. He’s a strong, young up and comer that’s dangerous.”

Yet as Bisping points out, the way he sees it, this isn’t about Gastelum. It’s about a former champ getting some peace of mind after the loss to St-Pierre, his first defeat since 2014.

“This is more about me and me taking a fight for my mental space,” he said. “For my coaches and everyone that supported me, I want to try and get back in the win column ASAP.”

There are easier pursuits for someone approaching 40. Like golf, right?

“True,” Bisping laughs. “But I think I’m better suited to getting punched in the face.”