Bisping, St-Pierre pull back the curtain during candid conference call 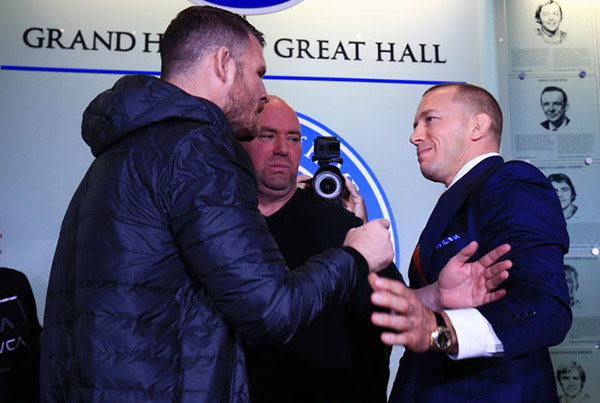 Over the course of his 11-year, 27-fight career in the UFC, Michael Bisping has an innate ability to make just about any situation into a personal grudge match and come up with some line of commentary designed to get under the skin of his opponent.

On rare occasions, the reigning middleweight champion has been known to pull back the curtain and give the audience a glimpse at his true feelings; a brief moment where he shares what he really thinks about the fight at hand.

Thursday’s UFC 217 media conference call was one of those moments as the 38-year-old standout not only made sure to get in as many verbal jabs at Georges St-Pierre as possible, but also took the time to express his admiration and respect for the returning former welterweight kingpin who looks to unseat him from the middleweight throne on Nov. 4 at Madison Square Garden. 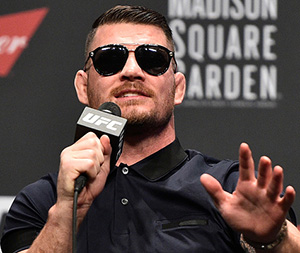 “Here’s the facts of the matter: I like Georges – Georges is a great guy and Georges is a fantastic ambassador for mixed martial arts; I’ve got nothing negative to say about him,” said Bisping, “other than the fact that we’re going to fight.

“He’s going to try to knock me out or choke me out or whatever it may be in front of the world, so right now, he’s my enemy. Once this is done, I like Georges, I respect him, but all’s fair in love and war, so f*** it – I’m starting on him now. I’m starting the verbal onslaught. I’m starting the attack.”

“The Count” went on to recount what happened when the two got into a shoving match during their faceoff at a media event inside the Hockey Hall of Fame in Toronto, with Bisping pointing out what he believes is the French-Canadian superstar’s tell.

“When Georges gets pissed off, he sticks his tongue into his lips, into his cheeks, and you can see it and that’s what I said,” recalled the man from Manchester. “I didn’t touch him – I pointed and said, ‘There’s the tongue!’ and when I did that, he flicked me in the face. It’s all good; the fight is almost upon us.”

While the outcome of next Saturday’s main event could have a significant impact on Bisping’s legacy and standing in the pantheon of all-time greats, St-Pierre’s position in the elite class has long been established.

Only the second fighter in UFC history to spend more than 2,000 days atop their respective division, the 36-year-old superstar walked away as the greatest welterweight the sport has ever seen and one of the best to ever grace the cage, period, following his UFC 167 victory over Johny Hendricks.

Now he’s on the precipice of making his return, up a division, in search of a second UFC title to add to his already impressive resume. Although his status as one of the sport’s all-time greats is unlikely to change regardless of how things shake out in New York City, St-Pierre is once again enjoying the process of preparing for a fight and is back to challenge himself and add new moments to his already memorable career.

“It’s a lot more fun,” he said of his preparations for this fight. “Of course it’s stressful and it’s hard on my nerves, but when I close my eyes and give myself the choice of would I want to be there or not, yes, I want to. I don’t do it because I have to; I do it because I want to. I’m happier than ever.

“I don’t really have something to prove,” St-Pierre said when asked why he opted to return after going out on top in 2013. “I do it because I want to live my life to the fullest. Why would I not want to come back? Fighting Michael Bisping for the middleweight title in Madison Square Garden, this mythical place, I would be a fool to not take this opportunity. 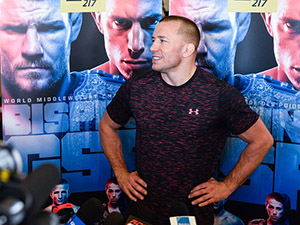 “A lot of people would want to be in my shoes and they are not. I have an opportunity, something I’m going to do and a memory that I am going to cherish for the rest of my life.”

And while he’s talked about potentially walking away for good if things don’t go his way next weekend in New York, it seems like those plans have changed – or at least acquired an asterisk – as UFC 217 draws nearer.

“It always depends how (I lose),” St-Pierre said in regards to his previous statements about retiring should he lose to Bisping next Saturday night. “I can’t say right now, nothing is for sure, but it depends how; how it happens. Sometimes you win a fight and you should lose and sometimes you should lose, but you win.

“It depends how it happens and how I feel – it depends on a lot of stuff – but I don’t see myself going away for a long time, so it’s going to be a good night.”