Bisping retains championship on home turf in 5-round marathon 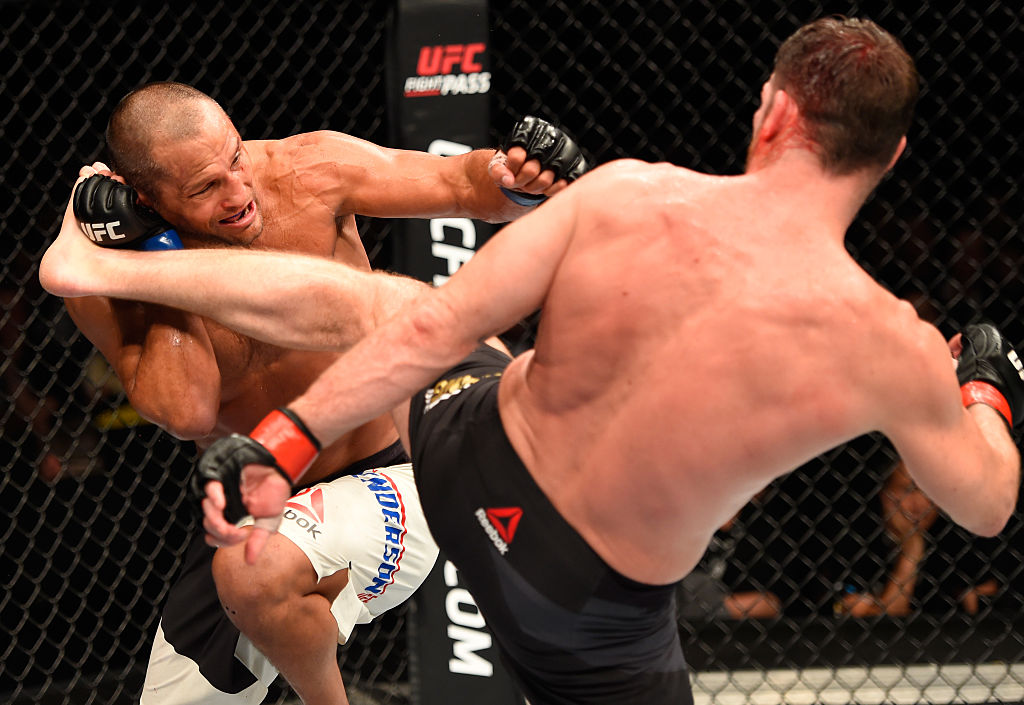 Seven years after most crushing loss of his career in 2009, UFC middleweight champion Michael Bisping successfully defended his crown for the first time and evened the score with the man that issued that defeat, Dan Henderson, by surviving two knockdowns en route to a five-round unanimous decision win on Saturday night at Manchester Arena.

“That was the last time that anyone will see me fight live,” the 46-year-old Henderson, 32-15, said. “I appreciate all the support throughout the years worldwide. I gave my heart and soul to this sport and the fans made it worthwhile for me to keep competing year after year. My last fight, for the belt, I came up a little short, but not bad for an old man, huh.”

Not bad indeed, as “Hendo” came perilously close to ending Bisping’s reign the same way he ended their UFC 100 bout in July of 2009. But Bisping put the demons of that fight to rest with a disciplined game plan and plenty of heart.

“I know people said this guy’s not the number one contender,” Bisping said of Henderson, who was ranked No. 13 coming into the fight. “This guy knocked me out cold, worst knockout in UFC history. You know what this guy could do. It took a lot of courage for me to do that.” 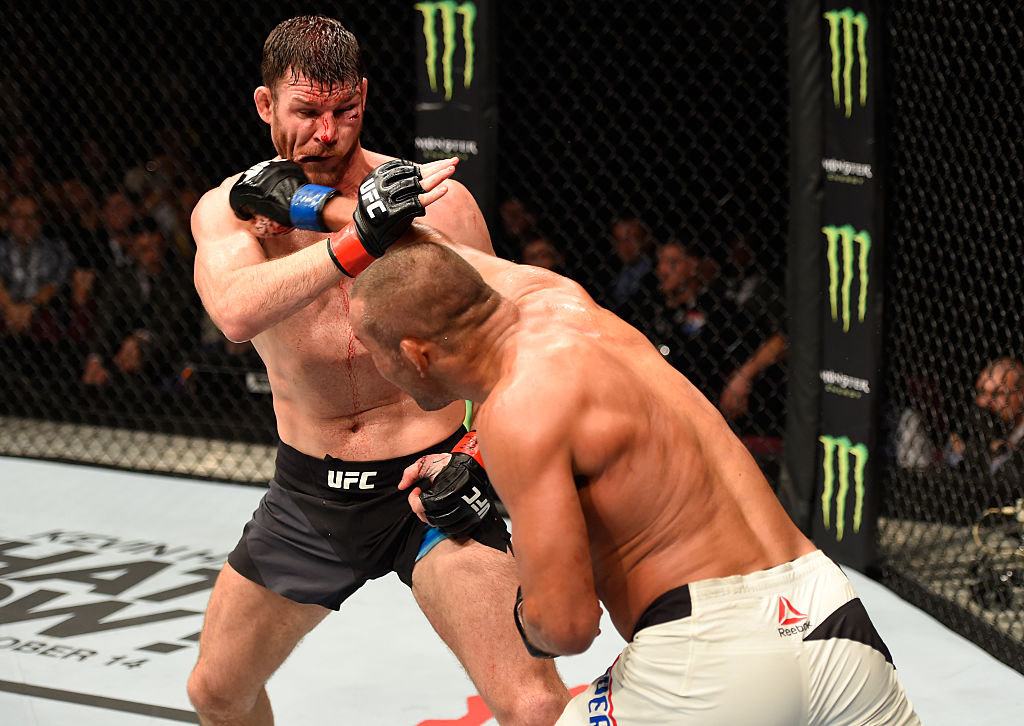 When it was over though, Bisping got his payback by scores of 49-46 and 48-47 twice. And for all the trash talk leading up to the fight, there was respect between the two when it was over.

“This guy is incredible,” Bisping said. “At his age, he just kicked my ass. He’s tough as old boots. After all the trash talking, you’ve got to respect him. The guy’s a legend.”

Bisping opened the fight with a head kick attempt, and he stood right in the pocket with Henderson, waiting for his moment to strike. Henderson scored with his first jab, but didn’t follow it up, so it was back to the war of nerves that was broken when “Hendo” missed wide with his first right hand “H-Bomb.” Blood soon began to flow from a cut on Bisping’s forehead, and even though he took a couple of Henderson’s right hands well, the third one dropped Bisping hard to the mat in the final minute. Henderson moved in for the finish and opened a cut under Bisping’s left eye as he emptied his arsenal on the Brit, but Bisping found his way out of trouble and made it out of the round.

Going right after Henderson to begin round two, Bisping was paying no mind to the prospect of getting nailed by his opponent’s right hand again, and he mixed up his strikes well, punching and kicking to the head and body. Henderson did get another right in, drawing a smile from Bisping, who returned fire with one of his own. After eating a low kick that wasn’t called by referee Yves Lavigne, Hendo did score a second knockdown in the closing moments of the frame, though Bisping quickly recovered from this one. 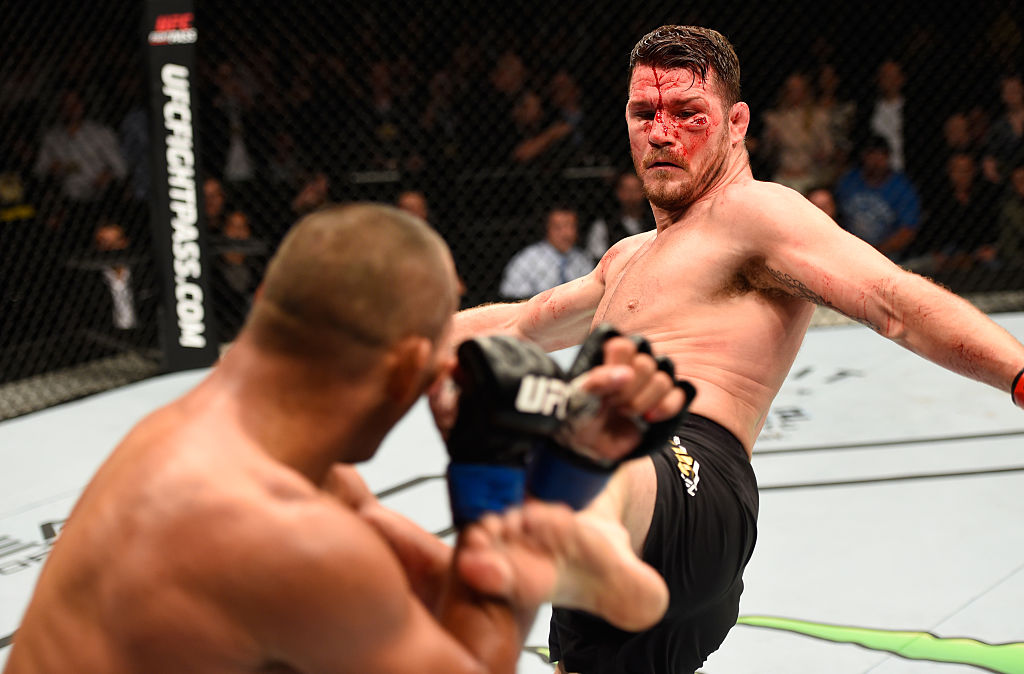 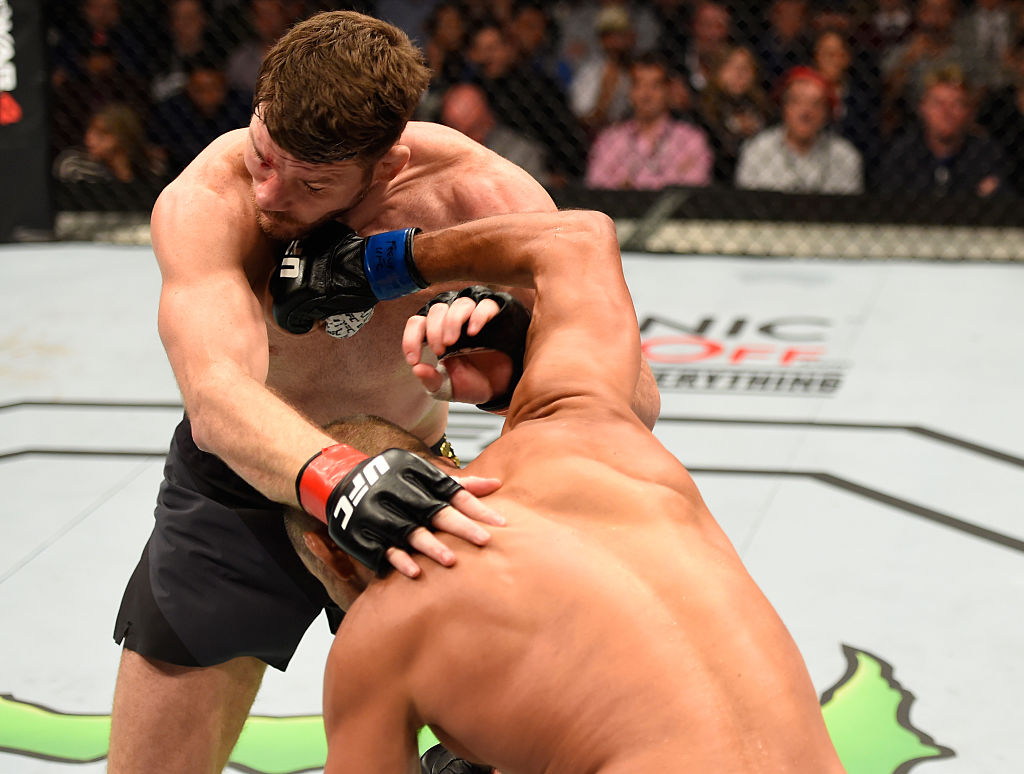 Henderson had his mouth open throughout round three, and Bisping took advantage with a high volume striking attack that allowed him to dominate the round. Henderson did land a couple rights, but Bisping took them well as the bout went into the championship rounds.

Temecula’s Henderson got a little busier in round four, perhaps aided by a bit of a break due to a low kick by Bisping. “The Count” did control matters once more though, albeit to a lesser extent than he did in the previous round.

With five minutes to go in the fight, Henderson’s sense of urgency was evident as round five began, and while his strikes were slower, they were still landing and scoring. But just when it seemed that Henderson had some momentum, Bisping would answer back with his flurries of punches and kicks. With under two minutes left, Henderson went back to his wrestling days and scored a takedown, but Bisping jumped up and looked to make a final charge, landing a knee just before the horn that may have sealed this most important of victories.