“Quitters Never Win,” was released in the UK to great acclaim, making the Sunday Times’ best sellers list along the way.
By Thomas Gerbasi, on Twitter: @TGerbasi • Jan. 29, 2020

A little over two years after his last professional fight, UFC Hall of Famer Michael Bisping is a best-selling author. His timing is obviously outstanding, but why was this the right time to tell his story in print?

“I’m a washed up old bum ex-fighter,” he deadpans. “I’ve got nothing else going on in my life.”

The laugh that follows is familiar and infectious, the response of a man who is embracing every minute of his time after the final bell rang.

“I’m busier now than ever, so that’s great,” said Bisping. “I’m proud of what I achieved, why wouldn’t I be, and I’ve had an interesting story along the way, so why not?”

“Quitters Never Win,” co-written with Anthony Evans, was released in the UK to great acclaim, making the Sunday Times’ best sellers list along the way. Last week was the book’s United States release, and it’s clear that this is a story that fans have wanted to read, and one that publishers have wanted to release for a long time.

BUY THE BOOK ON AMAZON HERE

“To be honest, I had a number of writers and publishers come to me over the years,” Bisping said. “I’m going back to 2008, 2009. Someone was asking me to do a book in England and back then, I was like, what are you talking about, do a book? There’s nothing to tell. Yeah, I made it to the UFC and I’ve had a few high-profile fights, but I’m not a champion, and the journey is far from over. As you know, I’m now retired, I managed to win the belt - touch wood – And though it’s not something I always yearned to do, the pieces fell into place, and why not?”

One of the key pieces was having Evans, a respected combat sports writer as well as a member of the UFC staff in the UK and US for years, on board as Bisping’s co-author.

“That was obviously very important,” said the former middleweight champion. “I told the publisher, ‘I’ve got the perfect guy. He’s a good writer, but more importantly, I know the man.’ Me and Ant have been friends for a long, long time now, and I can trust him. And you’ve got to be able to trust the guy. I’ve got to open up to him, and if I don’t know the guy and we’ve got no history, I wouldn’t have been quite as open about my feelings. I wouldn’t have spoke about the dark times and things like that. But Ant’s a friend. And having the right writer was very, very important.”

Bisping and Evans would get on the phone two to three hours a night to get the story down on paper, and one read of the book will make it clear that nothing was held back, whether good, bad or ugly.

“They were like mini-counseling sessions,” laughs Bisping, who was always open and honest with the media. But with “Quitters Never Win,” he takes things to a new level.

“It was definitely cathartic,” he admits. “Yeah, I’ve always said it like it is, but I’ve never said how it is in terms of my emotions. If I’ve got a problem with somebody, you’re gonna know about it. But if I’m feeling insecure or down or depressed, I don’t talk about that stuff. So to exorcise those demons, so to speak, and talk about that stuff, it was important that I had someone I could trust. Otherwise, I just wouldn’t have gone there. But it’s important for readers and the public to know that you can’t just have it as everything’s f**king great.

“Most MMA books that I’ve seen, you would think that most people haven’t had a tough fight in their life; they just go through everybody, they’re the hero and they have no down times,” Bisping continues. “And people don’t relate to that. And I’ve got to say it’s really mind blowing the amount of direct messages I’ve had on Twitter and Instagram of people just saying the nicest things. And I’m not a guy that talks about inspiring people and stuff like that. I’m not that guy, but that’s the kind of feedback I’ve been getting, so it’s a beautiful thing.”

Getting that positive feedback is a fairly new development for “The Count,” who reveled in being the guy you either loved or hated. There was no middle ground. But today, following a career in which he overcame obstacle after obstacle, fought all comers and finally put UFC gold around his waist in 2016 when he knocked out Luke Rockhold, there are a lot more fans than detractors.

“Listen, I look back and I cringe, so a lot of it, I deserved it and I was HATED,” he laughs. “But these days, it’s nothing but love, which is amazing. The negative comments are very, very rare these days. It’s quite something.”

It’s good to see the 40-year-old arrive happily at this place in his life, where he stays busy as one of the top Octagonside analysts in the sport while getting to spend more time with his wife and three kids. I remind him of the old days, when the only thing he was celebrating after winning season three of The Ultimate Fighter in 2006 was the fact that he wouldn’t have to go back to working in a factory. 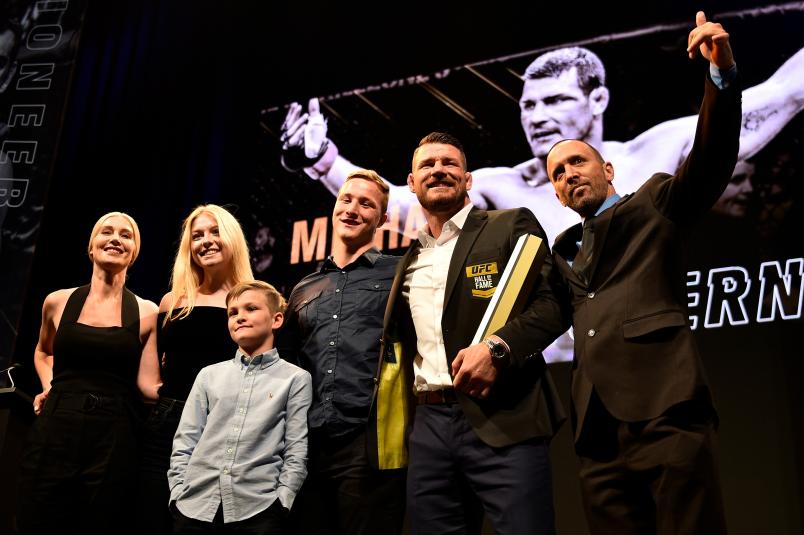 LAS VEGAS, NEVADA - JULY 05: Michael Bisping and his family pose for a photo after he is inducted into the UFC Hall of Fame during the UFC Hall of Fame Class of 2019 Induction Ceremony inside The Pearl at The Palms Casino Resort on July 5, 2019 in Las Vegas, Nevada. (Photo by Chris Unger/Zuffa LLC/Zuffa LLC via Getty Images)

“I used to work for minimum wage in every shitty, dead end job you could imagine,” Bisping recalls. “I very rarely did a full week because I hated it. I remember getting out of bed, putting on my shitty, dirty, smelly work clothes in the pitch black in the freezing cold at 6 o’clock in the morning with a hangover because life was so miserable you had a drink the night before. And then I sprinted to work and just about made it and punched in. And then I’d come out of the factory when it was pitch black again, I’d miss all the daylight, and it was rinse and repeat. And even though you worked your ass off, there wasn’t enough money to go around. We were broke, we couldn’t afford anything decent, I was borrowing off Peter and Paul, borrowing off my mum. It was miserable.”

The memories are fresh, even though the reality of his life today is far removed from those days in Manchester. But it’s those hard times that made him who he is, and he’ll never forget them.

“When I started fighting and things started turning around, my biggest fear was going back to that life,” he said. “And I’m still scared of it now. That’s why I work my ass off right now. And listen, a little hardship is good for character, but I don’t want my children to have to experience that kind of lifestyle.”

His children won’t have to. They have their dad and the blood, sweat and tears he shed in the Octagon to thank for it. As for “The Count,” his thanks go to the lady in his life, his wife Rebecca.

“Back in England in 2003, mixed martial arts wasn’t a thing,” Bisping said. “But she really had faith in me and she put her hopes and dreams on the back burner. She was still working and looked after the kids, I moved away to another city, sleeping in my car, just trying to train in sport that was a rinky dink little thing. But she always had blind faith in me, and I’ll never, ever forget that. That’s why the book’s dedicated to her, and if it wasn’t for her, none of this would happened. I’m forever in her debt for that.”