Bisping, Leites Amped Up for Scotland 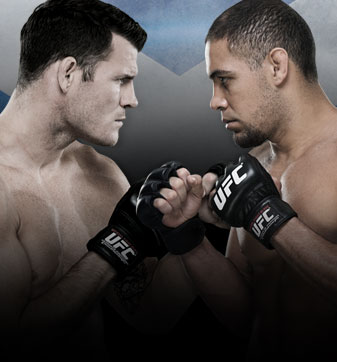 The bagpipes will be blowing and the leather will be throwing as the Octagon heads to Scotland.

On July 18, the UFC will return to the United Kingdom and, for the first time, hold an event north of Hadrian’s Wall in Glasgow. At the SSE Hydro arena, UFC Fight Night: Bisping vs. Leites will feature an action-packed card studded with top talent from Scotland, England and, really, all over the world.

Headlining this historic first Scottish UFC event is a middleweight melee between the #9 ranked Michael “The Count” Bisping and #10 ranked Thales Leites. The co-main is in the lightweight division, as Ross “The Real Deal” Pearson aims for a knockout against the battle-hardened Evan Dunham.

With tickets going on sale this week, the boisterous Bisping and the laudable Leites took to their phones and answered questions from the always-inquisitive MMA media. As anyone should and would expect, the conversation was dominated by The Ultimate Fighter 3 winner Bisping, who is always a winner on the mic and who will be fighting in his native UK for the first time since 2010.

“I am incredibly excited,” Bisping said. “2010? That was five years ago and it sounds longer when you say half a decade. Soon as I heard about the Scotland card, I was asking [UFC President Dana White] about it. Fortunately, Dana gave me what I wanted. I’m absolutely ecstatic. The UK is where I forged my career. I’ve enjoyed representing the UFC all over the world, but the UK is my home.”

Entering his 24th bout inside the Octagon with a 16-7 UFC record behind him, The Count has been and continues to be a top 10 fixture in the middleweight division with a recent unanimous decision win over CB Dollaway in April at UFC 186. “I still feel like I’m in my prime,” said the 36-year-old, who emphasized that his goal hasn’t changed in the slightest over all these years - he wants the title. To get there, Bisping knows full well he’ll need to get through the surging Leites first.

“To be honest, he’s a very skillful guy,” Bisping said. “He’s fought for the title. He’s very, very good at jiu-jitsu, which I have to be wary of. If it hits the floor, I’m not going to panic. I’ve been fighting guys like that my whole career. I’ve been punching guys in the face since I was eight years old and I’ve gotten pretty good at it. I’ll put my kickboxing against his jiu-jitsu.”

On the other end of this main event is a Brazilian freight train who hasn’t been stopped in five years. In his first UFC stint, BJJ black belt Leites owned a 5-3 Octagon record, including a five-fight win streak and a try at the UFC middleweight belt. In his second and current UFC go-round, Leites has rattled off five straight wins with three consecutive finishes, including back-to-back Performance of the Night bonuses for his KO of Francis Carmont and his most recent arm triangle choke of Tim Boetsch at UFC 183.

“[Bisping] is an excellent fighter,” Leites said. “I’ve been wanting to fight him for a long time. I’m ready. I’m strong mentally and physically. I’ll be ready for any situations that happen in the cage.”

Both fighters are champing at the bit to scrap in Scotland, with the Brit’s attachment being obvious and the Brazilian’s being revealing. “I’m a big fan of William Wallace from the Braveheart movie,” Leites said. “I have a tattoo of it on my ribs. It will be very special for me to fight on that land.”

While it is Scotland and not England, it would be a shock to hear the rowdy fans do anything but cheer their head off for The Count. “We speak the same English,” Bisping said. “We share the same land. I believe you spend our money. When I go to Scotland, I don’t feel like I’m abroad. I feel like I’m home. I’m hoping the crowd is on my side. I think we cheered for Andy Murray, I hope you cheer for Michael Bisping.”

On July 18th in Glasgow, the Octagon will break ground in Scotland as Bisping clashes with Leites at UFC Fight Night: Bisping vs. Leites.