While an official date remains to be set, the countdown toward the middleweight title clash between Michael Bisping and Georges St-Pierre officially started on Friday as the combatants shared the dais at T-Mobile Arena in Las Vegas.

If the back-and-forth between the future opponents is any indication of what to expect in the buildup to this fight, buckle up because this should be fun.

The chaos of Friday morning spilled over the afternoon’s press event, as UFC President Dana White opened things up by announcing Bisping was nowhere to be found, leaving St-Pierre to tackle the opening questions from the assembled media.

The French-Canadian superstar discussed the changes in the organization and talked about feeling revitalized, but refused to go into specifics about his plans beyond this bout with Bisping, frequently comparing the UFC landscape to the stock market and wanting to see whose stock is highest when the dust settles from this bout before making his next move.

Midway through his comparison, Bisping sauntered onstage, told him “No one gives a ****, Georges,” and apologized to White for turning up late, placing the blame on the car service that was to bring him from his hotel to the arena.

From that point forward, “The Count” was in full effect.

While Bisping could make an argument with an inanimate object personal, the middleweight champion seemed genuinely put off by St-Pierre seeking out a fight with him for his first bout after more than three years on the sidelines.

“You are a very, very good fighter, Georges – I respect you very much – but at the end of the day, there’s a reason why they have weight classes; it’s as simple as that,” said Bisping, who started his career at light heavyweight before dropping down to the 185-pound ranks. “I respect you for coming back, but I know why you picked me. 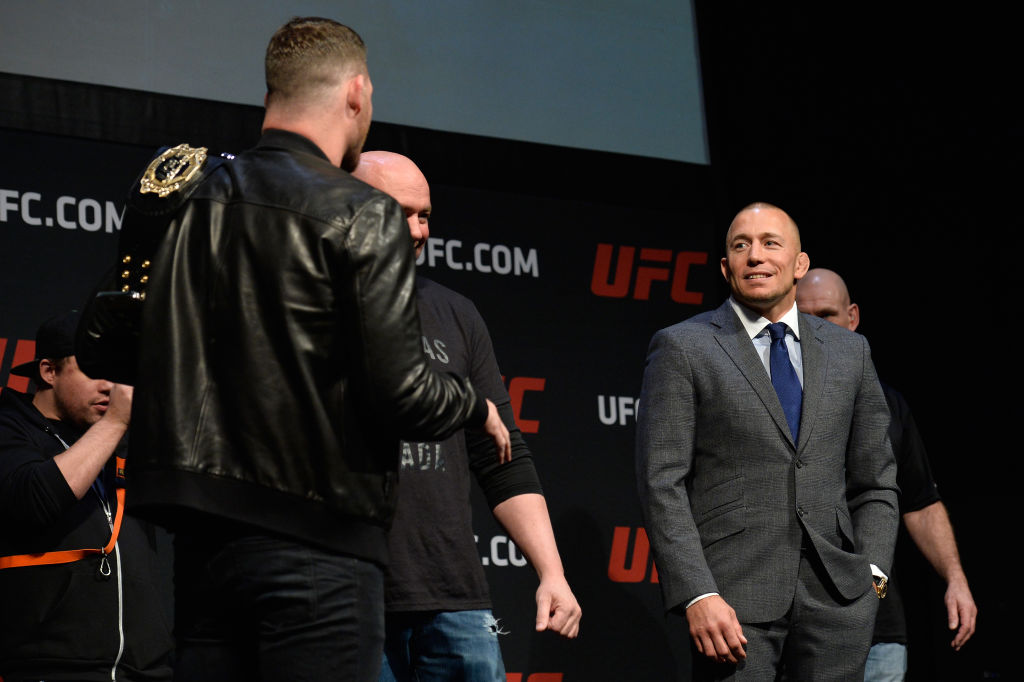 “You think I’m an easy fight, just like Anderson (Silva) did; just like Luke Rockhold did when I knocked him out in the first round, just like everybody does. Time and time again, I prove them wrong. This is the guy – the greatest of all-time – who didn’t want to face Anderson when he was the man, but he comes out of retirement to face me.”

The raspy-voiced middleweight champion egged on the returning superstar at every turn, pushing St-Pierre to divulge more about his long-term plans for his return and continuing to insist that this bout came together is because St-Pierre views him as an easy matchup.

Asked to address Bisping’s comments, “Rush” responded by applauding the champion for the tenacity and drive he’s shown throughout his career, before adding – politely – that his only concern at the moment is to knock the 36-year-old Englishman from the middleweight throne.

“Michael is a different kind of fighter,” began St-Pierre, dressed to the nines in a suit and tie, as always. “He’s a fighter that doesn’t rely only on his talent; he’s a hard worker and a grinder. I admire that. Outside of his attitude, I admire his work ethic because no matter what you throw at him, he’s going to come back.

“No matter which obstacle I’m going to put, he’s going to try to cross it, so I’m going to have to take him out of order during the fight and I’m aware of it.” 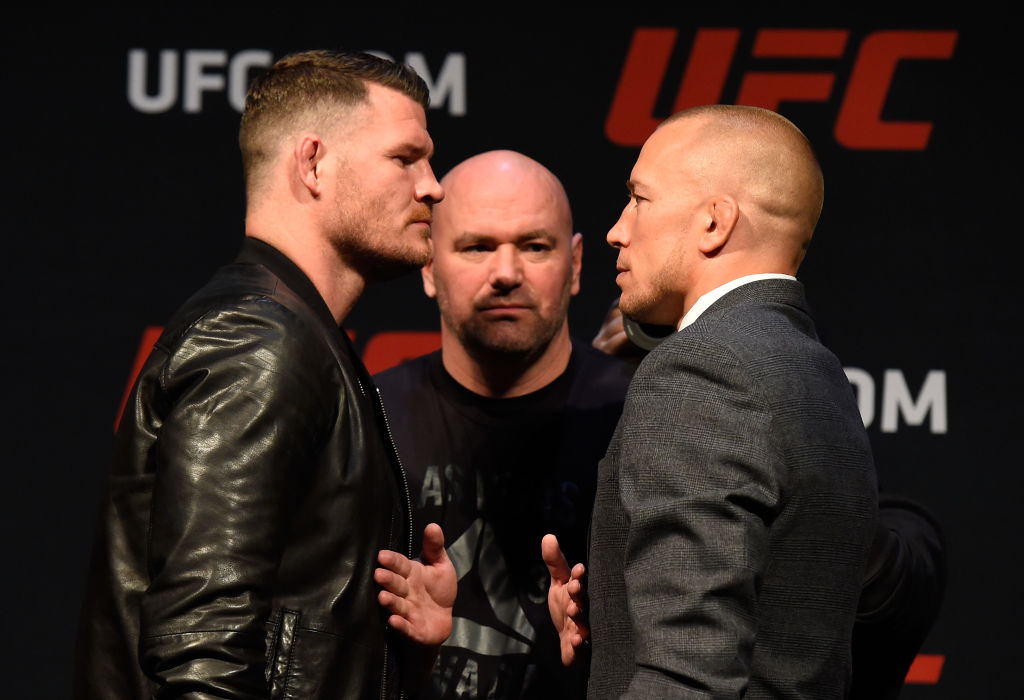 As the questions about why this fight came together continued, White jumped in to clarify the situation, explaining that the organization is fully aware of the blueprint St-Pierre has laid out for his return and that part of the reason the bout with Bisping came together is because the middleweight titleholder was the only champion available at the time.

“The Woodley fight was already happening with Thompson and you don’t know how those guys are going to come out of this fight,” the UFC President said of Saturday’s UFC 209 headliners. “Who’s going to win? Is one of them going to get hurt? Does something bad happen to one of the guys? We don’t know those things.

“So how am I going to bring Georges St-Pierre back unless I have an absolute positive fight for him and Bisping was ready, Bisping wanted the fight, so it was the fight to make.”

With that, this matchup is official and the countdown is on.

While an official date still needs to be set, White said his preferred landing spot for this contest would be International Fight Week in July, meaning we’ve got at least five months of antagonism from the middleweight champion and polite responses from his legendary opponent on tap.

And it should be terrific.