Michael Bisping is the UFC middleweight champion of the world. But if you hear him talk about his UFC 217 main event against Georges St-Pierre, you would almost think that “The Count” is the challenger, eager to prove something to a world that believes the return of Montreal’s GSP is the big story here.

“While he’s been retired I’ve been fighting the best guys in the world,” said Bisping, who has gone 6-2 in the nearly four years since St-Pierre took a hiatus from the sport following a November 2013 win over Johny Hendricks.

It’s the last five wins that have meant the most to the career of the former Ultimate Fighter winner, though, as he went from perennial contender to world champion, with a 2016 campaign in which he defeated Anderson Silva, Luke Rockhold and Dan Henderson being one for the ages.

Meanwhile, St-Pierre regrouped and found his love for the game again after a dominant reign over the welterweight division from 2007 to 2013. But Bisping isn’t buying his opponent’s reason for the break.

Ever since his UFC debut in 2006, Bisping has embraced the pressure that goes along with life at the top, even talking enough trash to put additional weight on his shoulders. The result has been 12 main events, some big wins and some equally big losses, but no desire to stop hearing the roar of the crowd on the biggest stage in the MMA world.

“I’ve always put myself under this amount of pressure, whether I’m champion or not,” he said. “You still gotta win your fights. It doesn’t matter if you’ve got your belt around you. If you’ve got the belt around your waist, that’s a privilege thing. So you can’t start feeling sorry for yourself because you’ve got pressure because you’re the champion. You’re in the position everybody wants to be in.” 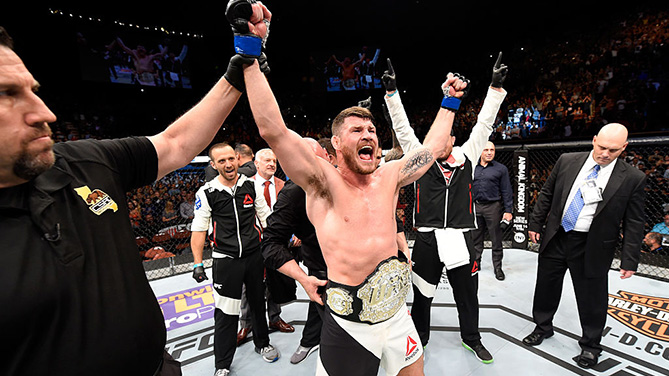 Yet while there’s no place Bisping would rather be Saturday night than in the main event at Madison Square Garden, he will enter the Octagon with the idea that the only reason St-Pierre wanted this fight is because he saw the champion as an easy mark.

“We trained together briefly 12 years ago,” he continues. “He outwrestled me, simple as that, and he thinks that he can outwrestle me still to this day because it’s still fresh in his mind. And I couldn’t wrestle back then. I couldn’t wrestle to save my life. He took me down repeatedly. He thinks he’s going to step into that Octagon, take me down, submit me or control me on the floor and become champion. It’s bulls**t. He trained with me 12 years ago and he thinks I’m an easy fight.” 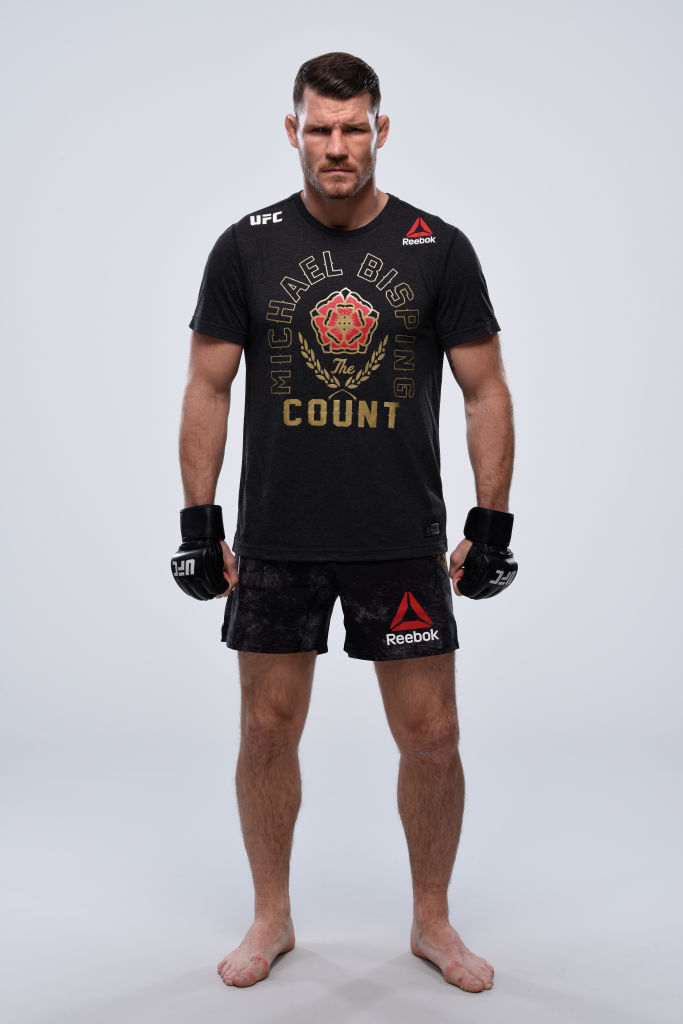 Bisping isn’t an easy fight for anyone. Twenty-Seven UFC fights confirms that. But some fighters need to feel that they’re behind the eight ball to perform at their best, and that’s been the Manchester product’s M.O. That underdog mentality has fueled Bisping for years, and it’s still doing so today. Win or lose, he’s going to show up.

“If I quit the first time I tasted defeat, I wouldn’t be here now,” he said. “That’s not what you teach, it’s not a good lesson for children, it’s not a way to live your life. We can all lose. I’m not Superman. Losing is a very real thing, it’s a very real possibility. He’s a great fighter and a great athlete and so am I. Two men enter and one will leave as the winner and one will leave as the loser. But that’s part of the pressure, that’s part of the game. That’s why we do this.”

And few handle that pressure better than the middleweight champion, who believes that just before he and his opponent make their walk to the Octagon, only one of them is going to be truly ready for what’s to come.

“When you’re in the locker room and it’s time for you to go, the fight before you is going on, you can hear the crowd, that’s when the nerves really kick in and that’s what separates the men from the boys,” he said. “That’s what separates world champions from gym fighters. That’s why Georges retired, because he couldn’t deal with the pressure and the nerves, and on the night, that’s all gonna come back to him.”

So what will be going through Bisping’s mind?

“I’m gonna look for a first round knockout.”