Middleweight contender Michael Bisping had the last word in his trash-talking battle with Jorge Rivera, ending the UFC 127 co-main event at the Acer Arena in Sydney, Australia with his fists via TKO in the second round. 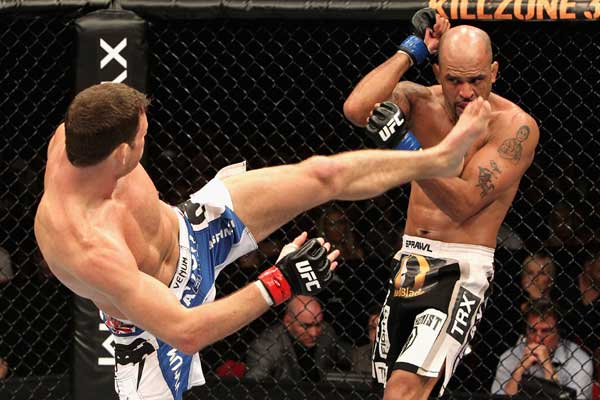 Rivera came out throwing but he came up short on his strikes. With a minute gone, Bisping sought the takedown and got it, but Rivera got up right away, calling for the Brit to trade with him. With two minutes gone, Rivera landed his first right hand, but Bisping took it well and scored another takedown moments later. In a scramble, Bisping landed an illegal left knee on the downed Rivera, drawing a point deduction from referee Marc Goddard and a halt to the action as the Octagonside physicians checked the New Englander out. Rivera made it back to his feet and insisted that he could continue, and the action resumed, with Rivera landing a left kick to the head. Bisping peppered his foe with strikes to set up another takedown in the final minute, and he landed a few good shots before both stood to finish the round. See post-fight interview

Rivera rocked Bisping with his first right hand of the second round, but ‘The Count’ recovered quickly and went on the offensive to get even. With 90 seconds gone, he scored with a right hand of his own and a follow-up barrage hurt Rivera. Another right hand put the veteran on the canvas and seconds later Goddard stepped in to halt the bout at the 1:54 mark of round two. 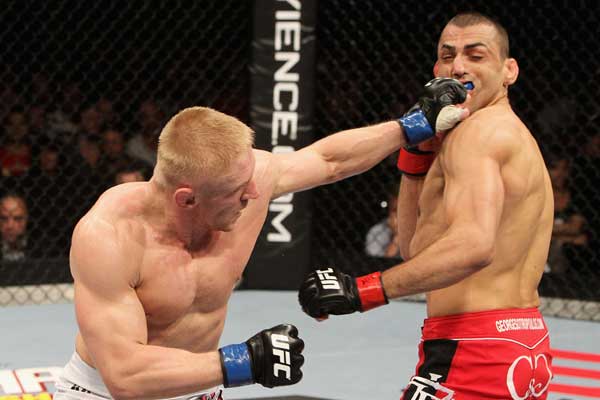 “It was a hard, hard fight, but I was able to do my gameplan, and that’s why I won,” said Siver, who kept the Australia native and jiu-jitsu ace from getting the bout to the mat throughout the three rounder.

Siver was busy with his kicks in the early going, with Sotiropoulos patiently using 1-2s while looking for a takedown opportunity. Siver effectively defended three attempts, mixing in punches along the way. With 1:18 left, Sotiropoulos got rocked and dropped by a punch to the head, and while he got up, his legs were wobbly, leading to another knockdown by Siver. Sotiropoulos wildly looked for a takedown, but to no avail. Luckily, the round was almost over, allowing the Aussie contender to make it back to his corner for a much needed break.

The two remained standing in round two, but Sotiropoulos’ defense was tighter and Siver’s strikes were a bit wilder. With three minutes left, Siver muscled out of another takedown attempt and 30 seconds later he did it again. In response, Sotiropoulos adjusted his attack, landing some good strikes as the round progressed.

With the fight possibly up for grabs, Siver came out fast with his kicks and some more solid takedown defense. The standup exchanges escalated, with Siver holding the edge, and Sotiropoulos’ corner called for their man to get the takedown as the final two minutes approached.  It was not to be though, as a loose Siver potshotted and sailed to the victory. 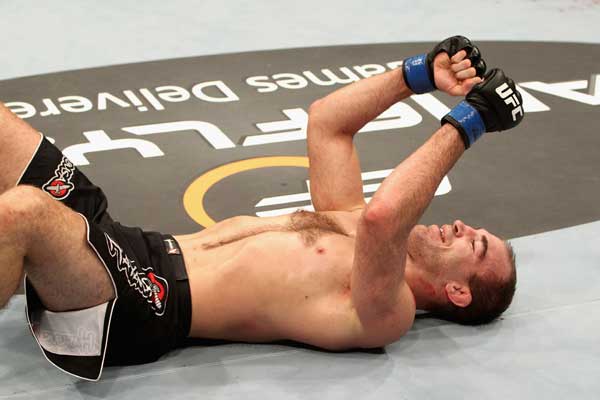 Indiana native and Australia resident Brian Ebersole finally got his UFC shot after more than 60 fights, and he made the most of it, upsetting Chris Lytle via three round decision in an action-packed welterweight scrap. See post-fight interview

Ebersole, a late replacement for the injured Carlos Condit, opened up with a cartwheel kick that Lytle easily avoided. “Lights Out” stalked calmly, throwing power shots, as Ebersole used a varied attack in order to throw his fellow Midwesterner off his rhythm. With a little more than three minutes left, Ebersole shot for a takedown and Lytle sunk in a guillotine choke, but Ebersole was able to work his way free and return the favor with his own choke. Lytle broke loose and tried for the choke again, but this time after falling short the two rose to their feet and locked up against the fence. Lytle made a third guillotine attempt, but again came up empty, and this time, Ebersole was able to cut Lytle under the left eye just before the end of the round.

Continuing to mix things up, Ebersole fought effectively in the early stages of round two. Lytle would still get his licks in, scoring particularly well with the uppercut. Ebersole’s movement and solid defense kept Lytle from getting off more than one shot at a time though. With under two minutes left, Lytle ate a right knee to the chin and he hit the deck. Ebersole initially looked for a choke, but Lytle was able to escape and get back to his feet. Ebersole didn’t keep it standing for long, as he slammed Lytle to the mat and kept him there for the remainder of the round.

Both fighters came out fast in the third, with the bout soon straying to the mat. Lytle looked for the guillotine twice more, and the second time he looked like he had it locked in, but Ebersole got loose yet again and the two rose. After a brief break to replace Ebersole’s mouthpiece, Lytle pressed with body shots, but Ebersole wouldn’t cower, and he got a brief takedown. Lytle looked for a sub from the bottom, but to no avail, and it was Ebersole ending the bout with some solid ground and pound that sealed the win. 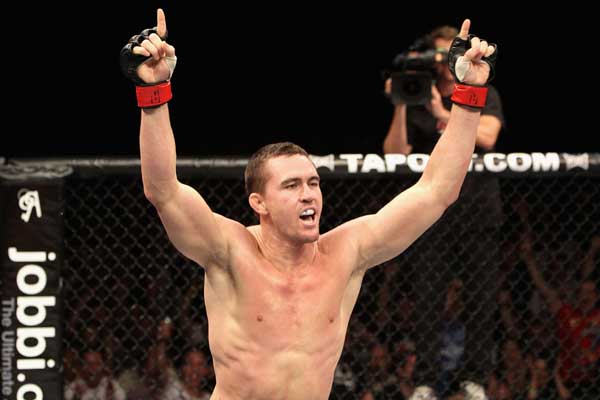 There were some solid exchanges to begin the middleweight bout, with an ensuing scramble allowing Noke to score the takedown and get right into the full mount position. The veteran, not content, kept moving, and he soon took Camozzi’s back and sunk in a rear naked choke, ending the bout via tap out at the 1:35 mark.