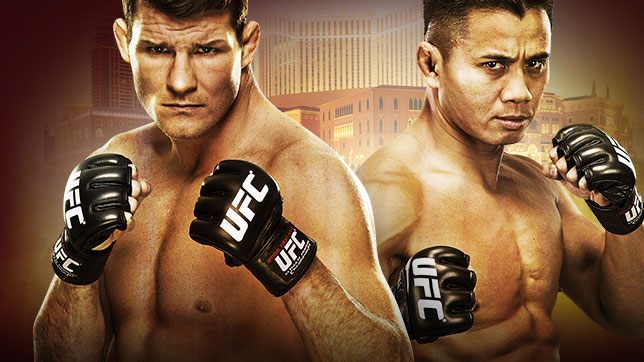 Michael Bisping and Cung Le are set to collide in less than a week at Fight Night Macao exclusively on UFC FIGHT PASS.

The two elder statesmen of the middleweight division have already made their way to China, but both talked about their bout before they made the trip.

For Bisping, this is a must-win fight, and he said he's taking it very seriously.

> Watch: Michael Bisping vs. Jason Day in this Free Fight

Le, a 42-year-old fighter who has been competing in martial arts since he was 10, said he plans to be active in the discipline for the rest of his life.

"Fighting in the UFC at the highest level is what I am interested in. I have competed in martial arts since I was 10 years old, 32 years of competition and most of it was competing just for the love of martial arts," Le said. ... That’s the reason I am still doing this, because I love it. I’m not back to promote a movie, or to increase my brand or any of that stuff Bisping claims. I am back in the Octagon because that’s exactly what I want to do. I've been out for two years because of injury; I had three elbow surgeries that’s the only reason I have been out this last few years."

At a press conference to promote Fight Night Macao, Bisping said he thought Le was a "phony," and claimed the South Vietnam native was only fighting to promote his film career.

“Cung Le is a bit of a phony. I went to Macao for the launch press conference with Cung Le in June, and I was very polite, very professional. I exchanged all the pleasantries, gave him all the small talk as you are supposed to in these situations and I even went as far as pretending to be absolutely blown away that he’s apparently friends with Channing Tatum," Bisping said. "Basically, I went out of my way to be nice to him and everything was very civil. We promoted the fight, shook hands, and went back home to train for the fight.

“Then I see him on UFC.com doing a Fight Club Q and A and he’s talking a load of bollocks about me. Basically, he’s jumped on the same old, boring bandwagon everyone else who fights me does with is to say what a smack-talker I am while, as always, they are the ones who talk crap first. What a phony. ... One fan at the Q and A asked him what his game plan was and he said “Flying tornado kicks and thunder and lightning!” What does he think we are going to be doing in the Venetian Macao? Playing Tekken 4? It was another cheesy, embarrassing line from a cheesy, embarrassing actor.”

“I was replying to a fan question. That was the point of the Fight Club Q and A, to give the fans the chance to ask questions of me," he said. "If Bisping is offended on that, well, that’s just him. He should get his facts straight, and focus on himself. I don’t promote myself by talking; I do my talking with my results in the Octagon. As for the movies, he’s done movies too, so I don’t understand what he’s trying to say with that.”

As far as the fight goes, both Bisping and Le share a respect for the other's abilities inside the Octagon.

Bisping said Le has good power and will try to make him ineffective by pushing the pace and testing Le's cardio.

"He’s a great striker if he can keep it long (at a distance) but he’s got nothing against the cage," Bisping said. "He’s got no stamina, either. But he’s very dangerous if you let him do what he does best.”

Le has always been impressed with Bisping's ability to speak.

“I’d say his best attributes as a fighter are his cardio, he’s a good striker, he’s hard to submit … and he’s a great talker," Le said.

Watch Bisping vs. Le and co-main event Tyron Woodley vs. Dong Hyun Kim this Saturday exclusively on UFC FIGHT PASS starting with the prelims at 6:30am / 3:30am ET/PT.