The Birth Of Pereira's Unconventional Style

Even before he set foot inside the Octagon for the first time, Michel Pereira’s reputation as an atypical, unconventional fighter preceded him, creating a buzz around his UFC debut.

Video of his previous appearances under the Road FC banner went viral within the online MMA community, with clips of the Brazilian doing backflips off the fence and attempting any number of unconventional attacks turning him into a Twitter sensation many were clamoring to see more from. When he debuted in the Octagon last May against Danny Roberts, “Demolidor” did not disappoint.

He did a breakdancing routine through Joe Martinez’ introduction and once the bout officially got underway, he attempted to propel himself off the fence a la Anthony Pettis twice, missed with a “Rolling Thunder” heel kick, and finally finished the British veteran with a flying knee and straight right hand combo that deserved greater consideration in the Knockout of the Year conversation.

And he did all this in less than two minutes.

“It’s just my style; it’s what I feel in my heart and in my head, and it’s the way that I like to fight,” Pereira, who takes on Diego Sanchez in the co-main event of this weekend’s UFC Fight Night event at the Santa Ana Star Center in Rio Rancho, New Mexico, said when asked about his unorthodox style that feels like a blend of kickboxing, gymnastics, and breakdance fighting that would make Zoolander and Hansel proud. “I like to perform in a way that is unique and I don’t think about it — it’s just the way that I compete.”

His performance against Roberts made anticipation for his sophomore appearance even higher, but things would not go as swimmingly for the chiseled six-foot-one upstart.

Set to compete in Vancouver, British Columbia, Canada, Pereira’s initial opponent was forced to withdraw from the contest a week before the fight, opening the door for local veteran Tristan Connelly to seize the opportunity to make his UFC debut in his own backyard. On top of that, Pereira’s cornerman for the fight was unable to join him in the beautiful Canadian outpost due to visa issues, leaving the welterweight to execute his considerable weight cut alone.

Pereira came in one pound over the allowable limit and drew criticism from fans and observers for performing a backflip off the scale at the ceremonial weigh-ins on Friday evening. In the Octagon the following evening, he deployed the same flamboyant approach as always, but failed to have the same success he did against Roberts.

As the bout wore on, Pereira began to fade noticeably and Connelly emerged victorious.

“I’m extremely confident that I’m going to make weight this time,” began Pereira, who carries a 23-10. 2 NC record into his clash with Sanchez this weekend, his second straight “road game” inside the Octagon. “Last time, I had a coach who couldn’t get a visa approved, so I ended up doing the entire weight cut by myself, which is an absolute disaster. This time, I’m confident I will be able to make weight and perform to the best of my abilities.” 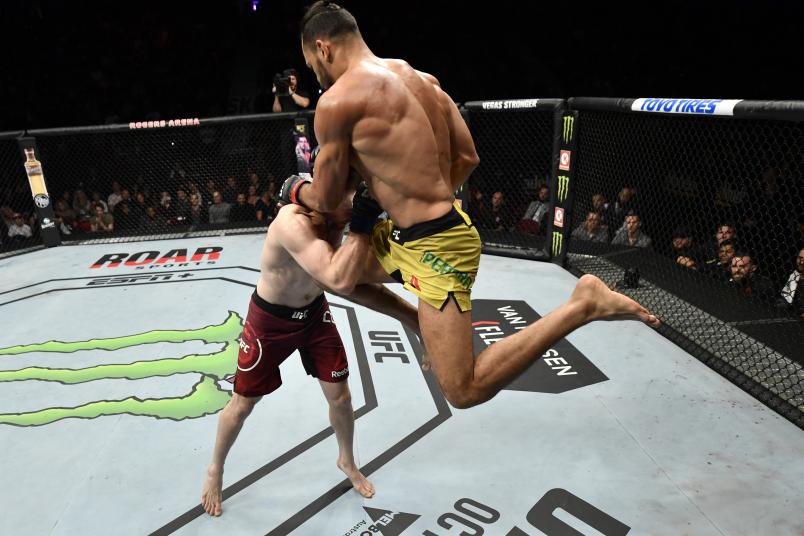 Hitting the mark on the scale is of paramount importance, but Pereira also heads into this contest dealing with questions about his approach for the first time since joining the UFC roster.

When he was storming through Roberts with flair and panache, Twitter was alight with praise for his arsenal of SportCenter-worthy attacks and willingness to take risks. But after missing weight for his bout with Connelly and tiring as the close fight ventured into the third round, many wondered aloud if he would be better served eschewing his collection of flips and rolls and flashy attacks in favor of a less taxing, less explosive fighting style.

So will Pereira dial back the acrobatics in pursuit of less criticism and hopefully greater appreciation for the skill he exhibits inside the cage?

“The public is going to say whatever they want and push whatever narrative they want about me,” said Pereira. “All I can do is give my best and put on the best performances possible. Hopefully as I continue to succeed and be successful, the fans will naturally gain respect for me as a fighter, and not just as an acrobat or a showman.

“For me, the public is extremely important,” he added. “I love my fans and my supporters — they’re why I do this, and why I want to leave a mark on the sport.”

He gets the chance to do just that on Saturday night, as he ventures into his opponent’s backyard for the second consecutive fight, ready to throw down with the 15-year UFC veteran Sanchez.

“For me, it’s normal,” Pereira said of facing the beloved Ultimate Fighter winner in front of a partisan crowd this weekend. “I don’t get too caught up in the hype or worry about whether it’s his hometown or mine or a neutral territory; it’s a normal opponent and a normal fight night and I just have to go out there and do my job.”

While the location of the bout may not matter to the promising Brazilian, this most certainly isn’t just a normal fight.

Saturday’s bout with Sanchez is the co-main event of the evening and a pairing against easily the most experienced, established fighter he’s faced to date. Although he is not a factor in the title chase, the indomitable “Nightmare” has spoiled plenty of perceived breakout opportunities in the past and would certainly like to do the same again this weekend.

But where he’s not particularly bothered by where he’s fighting, Pereira is acutely aware of whom he’s fighting and the importance Saturday’s penultimate clash carries as he looks to rebound from his last outing and begin a successful 2020 campaign inside the Octagon.

“For me, it’s very important,” he said. “This fight is going to help ignite my career and kick off 2020 on the right note.

“Coming off a loss and still being able to fight a legend in the co-main event in his hometown is the perfect springboard back to the success I hope to enjoy this year. I’m incredibly excited and know this is an important step for my career."