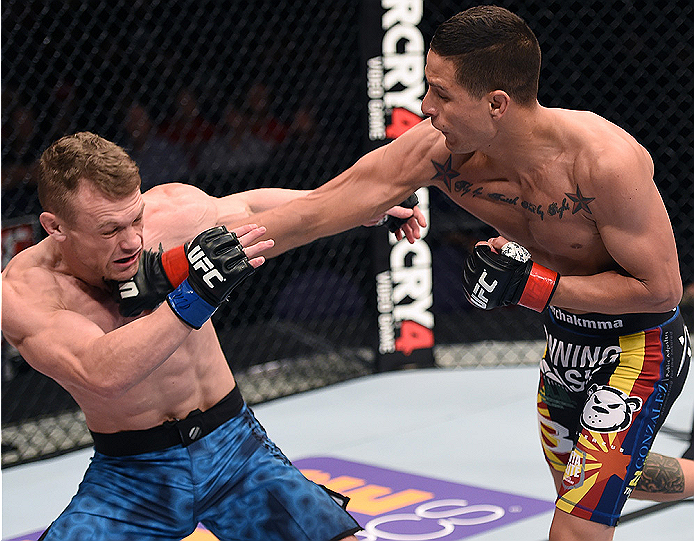 The chip on Anthony Birchak’s shoulder won’t be going anywhere any time soon.

The Arizona-born bantamweight is a highly touted fighter on the rise in the 135-pound ranks, but “El Toro” knows the larger chunk of the spotlight has yet to find its way to where he’s standing. And while the 29-year-old is as grounded as they come in the fight game, that doesn’t stop Birchak from striving to reach the top.

The LutaMMA leader has been a champion for other organizations and is putting everything into his climb to win gold under the UFC banner. He knows it is going to take a collection of high-profile victories inside the Octagon to earn the respect he’s after, but he’ll be damned if he’s going to be denied what he’s chasing.

“I’m an easygoing guy and I’ll let people chew and pick at me a bit with their words, but at the end of the day I have a destination in mind and I will get there no matter what or who is in my way,” Birchak fired. “I’m going to overcome all obstacles in my mind to succeed.  My goal is to fulfill my full potential in this sport and become the world champion I know I can be.”

Although Birchak knows there are no easy bouts on his way up the bantamweight ladder, he wouldn’t want one if it were available to him. The Tucson native doesn’t believe there is a ceiling for him in the world of MMA, but in order for him to become the best version of himself, he’s going to need to face the very best in the world. In a sport where even the slightest setback can bump a fighter far off course, that’s a brave approach, but it’s the path Birchak has chosen to travel.

And that mentality is the reason he’s so fired up to step into the Octagon against Brazilian phenom Thomas Almeida this Saturday night in Sao Paulo.

“I know I’m not the focus in this fight, but I’m okay with that,” Birchak said. “I have no problem letting [Almeida] have all of that on his shoulders. He can have the camera crews coming around him and having to do 17 interviews every day. While he’s doing that, I’m training and staying on focused on the job I have to do.

“The attention he’s getting is exactly what I want, and I have no problem earning it. That’s what this fight is about to me. I want people to know who I am. I want people to know my story and why I fight because it’s not about money for me. This is about my family, man, and the best way to get to the next level of visibility in this sport is to defeat a guy with a lot of buzz around him. And that’s what I’m going to do.”

While the young bantamweight wrecking machine is undefeated in 20 fights, with three of those coming in the UFC, Birchak had absolutely zero hesitation when the bout against him came across the wire. He knows all the hype and promotional push is being put behind his upcoming opponent, and that is what makes the matchup so appealing for the former collegiate wrestler turned mixed martial artist.

For a fighter who is looking to ascend the divisional ranks in quick fashion, a victory over an opponent with the heat Almeida is currently carrying would present the perfect opportunity, even though it comes with a serious amount of risk involved. The stakes surrounding the bout only increase when Almeida’s Sao Paulo roots are factored in, as Birchak will truly be going into hostile territory in search of victory.

That said, Birchak won’t deny the outside factors attached to the fight, but going behind enemy lines to derail Almeida’s hype train have him fired up and ready to go.

“This is the fight I wanted and I got it,” Birchak said. “My last fight against Joe Soto, I asked for it and I got that one as well. I’m not asking for guys who are on the downside of their careers on some two-fight skid…I’m asking for the best in the division. I want to fight the top guys because I’m not here for a long time; I’m here for a good time. And that is what this is. I know he’s a hot item in the division and I’m looking to strike that iron and make it mine.  We are both finishers and this is going to be one of those fights where you see two fighters putting it all out there.

“I know it’s going to be hell down there,” he added about the notorious Brazilian crowd. “I know they are going to be chanting, ‘You’re gonna die.’ I know that is coming, and the fact I know it’s coming gives me a bit of an edge to prepare and understand it. I came up with this analogy the other day: The majority of home invasions don’t end well for the home owner. I’m going down there to invade his house and it will not end well for him.”

As Birchak plans to go behind enemy lines to push his career forward through the fire, he’ll do so with one motive serving as the driving force, and that’s progress. The scrappy bantamweight fought and clawed for years just to make it to the UFC, and now that he’s arrived and has a victory under his belt, Birchak’s next goal is to make some noise in the larger divisional picture at 135 pounds. That is the next step in his plan because that’s the way he’s always envisioned it going.

In a career that has seen both sides of the proverbial coin, the one thing Birchak has taken to heart more than anything else is the importance of pushing forward despite the circumstances he’s faced with. That’s the fighter in him showing through, and the mixture of heart and mental acuity it’s taken to get him this far is what he believes will always be the difference maker once the Octagon door closes.

“I truly believe the only thing worth focusing on is your own personal growth,” Birchak said. “That’s one of the biggest things I’ve learned during my time in this sport. I’ve won fights and I’ve lost them and the only thing different is how people treat you. That’s why I’ve always kept a close circle with my family. I can honestly say I’ve never seen too many people come and go, which means I’m doing something right. I’ve been in a constant state of learning throughout my career

“This is one of those perfect opportunities because he looks so great in there, and when I destroy him it’s going to make me look that much better. People are going to be asking who I am because they are going to be impressed with what they saw me do to him.”