Quarantillo Ready For The Real Work To Start

Billy Quarantillo has had UFC dreams for years and now that he's finally made it, all he wants to do is put the work in to be success.
By Thomas Gerbasi • Aug. 23, 2019

When Billy Quarantillo makes his UFC debut, someone, somewhere, will refer to him as the new kid on the block, as if he fell out of the sky and into the Octagon with a handful of fights and dreams to make it in the big show.

And yeah, the Buffalo native has the same desire to do big things in the UFC as any fighter does, but to think he hasn’t paid more dues than most to get here would be selling him short.

“I know what it took to get me here and I do think I appreciate it more because not only have I had 28 fights, counting my amateur career and boxing matches, but I’ve also had a couple really serious injuries,” said the 30-year-old featherweight, who punched his ticket to the UFC with a third-round stoppage of Kamuela Kirk on week five of this year’s Contender Series. “I broke my hand during one fight that I actually won, and seven months later, I won another fight, then tore my ACL right after it. So there’s been a lot of ups and downs, a lot of late nights wondering if I’d ever get to this point.”

Those late nights turned into early mornings in 2017 after he suffered his ACL injury during wrestling practice following a first-round knockout of Eric Reynolds. The victory was Quarantillo’s fourth in five outings after a stint on season 22 of The Ultimate Fighter, and when he saw his friend and teammate Matt Frevola earn a UFC contract ten days later on the first season of the Contender Series, Quarantillo was more excited than ever to get back into the gym and earn his call to the Octagon.

“I was super ecstatic for him,” said Quarantillo, but when he tore his ACL, it was devastating, especially since it coincided with a serious illness suffered by his dog that put him in a tight spot financially.

“I was pretty much dead broke,” he said. “I had no money, I had a bum knee and doctors told me I can’t fight for a year. For two, three weeks, I was really depressed and uncertain about what I was doing with myself. I thought I blew the whole thing. It took a little while to get out of that.”

That’s when the late nights / early mornings came into play. Unable to sleep as he recovered from the knee injury, Quarantillo eventually started getting up and working out at three or four in the morning.

“I built a habit,” he said. “That was the turning point in these last few years.”

In February of this year, he returned to active duty and picked up where he left off, knocking out Adrian Vilaca in two rounds. Then came the call for the Contender Series and he made the most of that opportunity. Now he’s a UFC fighter, and the glow hasn’t worn off yet.

“A lot of people ask me, ‘Has it hit you yet?’ And it has and it hasn’t. I’m still waiting to make it official and get that debut underway, but it’s definitely been a good feeling, and I’ve been working for this. I watched The Ultimate Fighter when I was 16 and thought it was so cool. And then I really started getting after it in 2010, so it’s basically been a ten-year goal that I was able to accomplish, and now the real work begins.” 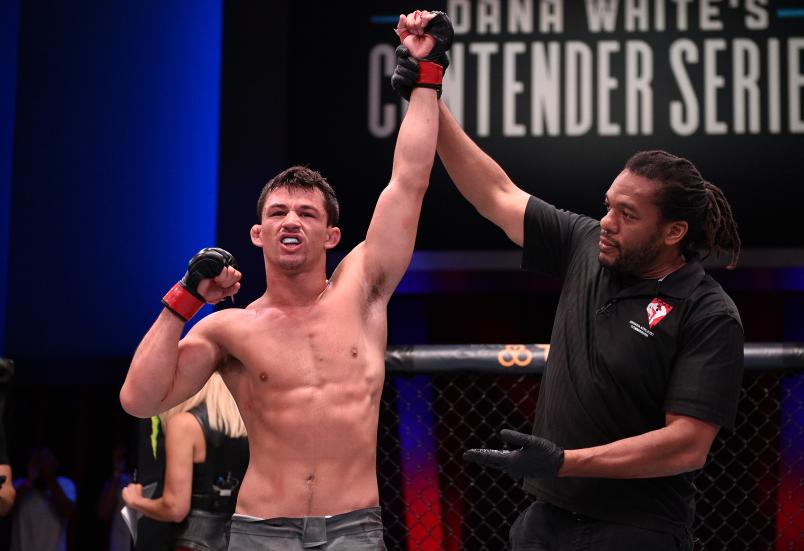 Billy Quarantillo celebrates after his TKO victory over Kamuela Kirk in their featherweight bout during Dana White's Contender Series at the UFC Apex on July 23, 2019 in Las Vegas, Nevada. (Photo by Chris Unger/DWCS LLC)

Work has never scared Quarantillo, and if he ever starts to think of slacking off, he’ll think about those late nights, those early mornings, and his desire to never go back to a job where he doesn’t control his own destiny. If that doesn’t get you working, nothing will, and Quarantillo knows it. That’s knowledge many UFC newcomers don’t have, and that only comes with experience in competition and in life. He has both, and if not for the last four years, he might have been one of those new kids on the block who can’t handle the spotlight.

“It was heartbreaking at the time (not making it to the UFC after TUF), and even back then I think I would have matched up well with some people, but they might have matched me up with a killer and I would have been screwed,” he admits. “So these last four years, I needed to sharpen up and I’ve gotten so much better.”