Billy Quarantillo's UFC debut went flawlessly and it turned out to be everything he had expected
By Thomas Gerbasi, on Twitter: @TGerbasi • May. 28, 2020

Want to know what waiting four years for your big dream to come true looks like? Watch the eight minutes and 18 seconds of Billy Quarantillo’s UFC debut against Jacob Kilburn last December and you’ll get a good idea.

On that night in Washington, D.C., Quarantillo made everything right in a career that has seen more twists and turns than an amusement park ride. But it wasn’t all amusing for the Buffalo native. Far from it. But when he finally got to within punching distance of a goal he had been chasing since he first put on the gloves in 2010, he punched right through it, finishing Kilburn to get himself in the UFC win column for the first time.

And while these moments don’t always live up to what you’ve made them out to be in your head through all the days in the gym and in fights against people no one has ever heard of, Quarantillo, who turned 31 the day after his win, says it was everything he expected.

“It was exactly what I thought it would be,” he said. “I moved to Florida in 2010 and I'm really a big believer in visualizing and writing down your goals. And the goal has always been to be a world champion, but one of those big goals, even before I could start going for that world championship, was to get into the UFC, and not only get to the UFC but to keep winning fights to get to that championship. And I'll definitely never forget the next day how gratifying it felt and how relieved I was, because it could have been a huge bust. There was a little bit of uncertainty there, especially after The Ultimate Fighter. So the next day I hung out with my entire family in DC and they had a big party. We had a bunch of food, we watched the Bills game and we all had a great time and I just got to soak it all in with them. It was all worth it.”

If you’re being objective, it was just another win by a prospect making his debut in the big show. If you’ve got a heart, you had to feel good for “Billy Q,” who had been close to the UFC before, only to fall short. There was the time on The Ultimate Fighter 22, where he went 1-1 but wasn’t called back for the season finale card. Then he comes off the show and beats a fellow TUF vet in Marc Stevens, only to get stopped by Michel Quinones in his next fight on April Fool’s Day in 2016. 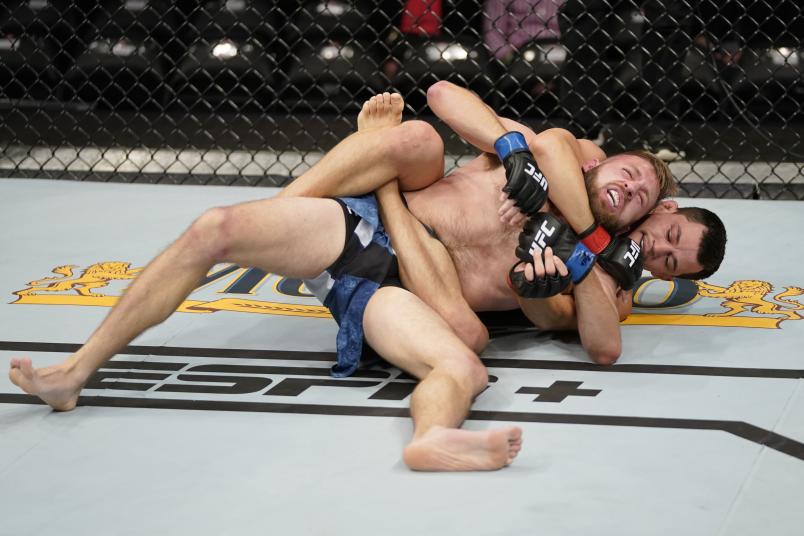 Quarantillo must have felt like it was a cruel joke being played on him, but he had to give it another shot. He was too close to turn back. He won his next four fights, won his bout on Dana White’s Contender Series, and then had his UFC contract. But the attitude of fighting every fight like it’s his last didn’t change, and that was evident against Kilburn, as he looked better than he ever has, and under the bright lights, no less.

“If we have a bad day, that could be it,” Quarantillo said. “So I can't afford to do that. I put too much work in, too much time in. I've dedicated my life to this and I'm not just gonna let it slip away.”

On Saturday, Quarantillo returns for UFC fight number two against Spike Carlyle. It’s at a catchweight of 150 pounds, but the Tampa resident didn’t blink when the request was made. He wants to fight. Now.

“I said I don't want to let Spike off the hook now, let's do 150,” Quarantillo said. “It's definitely an interesting time, but we got the deal done. We both had to deal with this pandemic, but he's another guy in the way that I need to beat to get to that next level. I've got big goals and big plans and I don't want to keep waiting around. I was getting bored over here.”

He laughs, confident that while training camp has a different look in the midst of the COVID-19 pandemic, his work ethic is unchanged.

“The longer this fight goes, my pressure and my conditioning is hard to match,” Quarantillo said. “I see it with guys that I train with and spar with. I can go round after round after round and I'm usually wearing out the fresh guys. So it's not a good matchup if you're not in good shape, and if you're taking it on short notice, I'm a very bad matchup.”

Clearly, he has not taken his foot off the gas after his first UFC win.

“I was able to reach a lot of my goals in this past year and it's cool to see a lot of the hard work pay off all in the same time frame,” he said. “I got my black belt, I got the UFC win, the UFC debut and I was able to put money down and buy a house about three months later. Those were all goals that took me about ten years to do, and it all came to fruition all around the same three, four-month period, which is pretty crazy to think about. But the job's not done yet.”

That’s what Quarantillo will be reminding himself on Saturday night in Las Vegas, when it’s Spike Carlyle standing in the way of the next goal on his list.

“I was never a high-level athlete,” he admits. “I played hockey but I got cut my senior year because we were partying too much, and I wasn't a star athlete, ever. Everything I've earned, it's been through hard work and determination. Every fight I go into, I look at my opponent and think, how bad do they want it, have they put in the work, have they gone through the struggle? And most of the time the answer is no. So going into this fight and going into the next fight, they know what I've been through and that's why I can't let up now.”