Billy Quarantillo: 'He's In For A Very Long Night'

Billy Quarantillo Wants To Remind Fans Why He's A Must Watch Fighter At UFC 282: Błachowicz vs Ankalaev When He Challenges Alexander Hernandez
By Thomas Gerbasi, on Twitter @TGerbasi • Dec. 8, 2022

Timing is everything. Billy Quarantillo and Shane Burgos couldn’t have had it worse for their UFC 268 bout at Madison Square Garden in November of 2021.

“I'll never forget it,” laughs Quarantillo. “I was in the Knicks' locker room, warming up and they're showing the (Michael) Chandler-(Justin) Gaethje fight on the TV, and when they start scrapping early on in the fight - Chandler gets dropped - and as I'm watching it, I could feel the crowd above me. It felt like they were literally on top of me and it felt like I was in the Colosseum watching this crazy thing.”

With each passing second, the featherweight, with plenty of family and friends who had made the trip to the Garden, saw his opportunity to get a Fight of the Night bonus slipping away.

“I was hoping for a quick finish because I saw some other quick finishes that night and I remember thinking that if there's a quick finish here, me and Burgos have a real good chance of getting Fight of the Night because I knew it was gonna be a dogfight,” Quarantillo continues. “Then when Chandler got up and he kept scrapping and he wasn't going out, the crowd kept getting louder and louder and louder. I was looking around and looking at my brother, and I'm like, 'What the f**k, man? We gotta go on after this?' (Laughs) It reminded me of trying to go on after Dave Chappelle or Joe Rogan at a comedy show. How are we gonna top this one? I had a good feeling we were gonna put on a show, but it was tough to match that.” 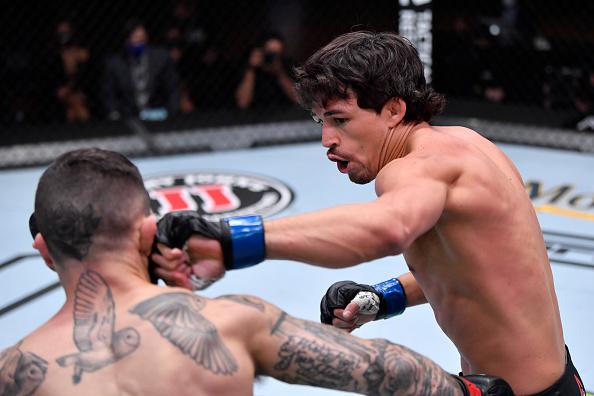 Billy Quarantillo punches Gavin Tucker of Canada in their featherweight bout during the UFC 256 event at UFC APEX on December 12, 2020 in Las Vegas, Nevada. (Photo by Jeff Bottari/Zuffa LLC)

The crazy part is, Quarantillo and Burgos did match the action and intensity of the lightweights they followed on the UFC 268 main card but, simply put, the crowd was exhausted, and when the Fight of the Night award was given out, it went to Chandler and Gaethje. Burgos left with a decision win, Quarantillo with his first loss in nearly a year, and though it stung, it didn’t hit him like that aforementioned 2020 loss to Gavin Tucker did.

“I watched it (the Burgos fight) right after,” said Quarantillo. “It was very interesting because I started my UFC career 3-0 and then I lost to Gavin Tucker, and I was a favorite in that fight. And after it, it was one of those things where I kind of learned, all right, maybe you shouldn't read comments because people let me hear it.”

Those comments were what you would expect from anonymous internet trolls.

“Oh, you ruined my parlay.”

“I can't believe you lost that; you shouldn't even be in the UFC.”

“I saw it from everyone,” Quarantillo recalled. “Then I won the (Gabriel) Benitez fight and people gave me my flowers. I didn't hear too much from it. But then losing to Burgos, it was an interesting thing because I was expecting the Gavin Tucker response. But it was actually mostly positive. Even walking out of the cage, people were saying really nice things. I was surprised with the positive response from the Burgos fight, so I was okay with going back and watching it, and it's easy to see your mistakes after, and there were a lot of them I took from that fight right away and immediately started working on what I could do differently, what my future opponents are gonna try to do and breaking it down and trying to figure out how are these guys gonna try to beat me now. If we can stop those things, they're gonna have a really tough time. So I was able to do that, I'm cool with Shane Burgos anyway, so there's no hard feelings with that, and I didn't have a problem watching that fight. I still don't want to watch the Gavin Tucker fight.”

Quarantillo laughs, over a year removed from the bout as he prepares for his return on Saturday against Alexander Hernandez. It’s been a long break for the 34-year-old, one that included an injury-induced withdrawal from a summer bout against Bill Algeo. But on the positive side, there was the arrival of his son, William Jr., and the opportunity to now come back in front of another full house at T-Mobile Arena. As for everything else, he didn’t get to capitalize on the Burgos fight, but he’s ready to get that momentum back this weekend.

“Coming off the Burgos fight, even though I lost, it was a huge opportunity and opened a lot of people's eyes to where I was,” he said. “It got a lot of people excited for my next fight and this sport is always, who's next, who's up, who's this, who's that, and anytime you take time off like this, people kinda forget a little bit. They say, Billy put on a crazy fight, but that was a year ago, and I miss the excitement that people would get continuously. That dies down a little bit as time goes on, so I'm just excited to get back in the driver's seat, get the momentum going back on my side, seeing all the fans, being in a big crowd, and my whole family getting to come together.”

Quarantillo expects to have 30 family members and friends in attendance, and while they welcome him back to the Octagon, he’ll be welcoming Hernandez to the featherweight division for the first time, and he’s not too sure “The Great Ape” will enjoy it.

“Him coming down to featherweight, he's gotta be cautious with his gas tank and cutting the weight correctly because I put a pace on people that's different, and most of my fights, I've won from just breaking them, putting the pressure on, and making them dig really deep,” said Quarantillo. “I'm expecting him to have a really great cut and I'm expecting the best Alex Hernandez, but, at the end of the day, we haven't seen him at 145 yet and I've had my last 10 fights at 145, so it's gonna be a whole different look that I don't think he's gonna be prepared for because there's really no way to prepare for the type of pace that I run at 145.”

And if Billy Q has his way, maybe there will be a Performance of the Night bonus in his future, regardless of where his fight sits on the card.

“I know I'm able to push that three-round pace hard for 15 minutes,” he said. “I've done it pretty much every fight, but I’m going to make sure I don't make any mistakes, and he's in for a very long night of fighting.”