Billy Q Finally Gets His Walkout

Billy Quarantillo has been thinking about his first walk to the Octagon for a long time, even before he was a UFC fan. So if you hear Shawn Michaels’ theme song blaring from the speakers at Washington D.C.’s Capital One Arena on December 7, it’s not “The Heartbreak Kid;” it’s “Billy Q.”

“I’ve been thinking of my UFC walkout since I was 16, 17 when I watched The Ultimate Fighter,” said Quarantillo, who has not yet revealed his walkout music for his UFC debut.  “Growing up, it was pro wrestling, then we watched some MMA from Japan like PRIDE, and I almost didn’t know the difference. We thought pro wrestling was real, of course (Laughs), and then we saw The Ultimate Fighter and we’re like, ‘This is cool, these guys are really fighting each other and they’re regular dudes just like us.’ So I’ve been thinking about walking out there and fighting in front of stadiums of people my whole life. I would watch Shawn Michaels, who was my favorite wrestler, and he’d come out and the whole crowd would go crazy. I always loved that idea of being a showman and entertaining people.”

It’s largely been Quarantillo’s entertaining style, one that has seen him end nine of his 12 pro wins by knockout or submission, that put him on the map (and The Ultimate Fighter 22), and it’s certainly what earned him a UFC contract in July when he halted Kamuela Kirk in the third round of their Dana White’s Contender Series bout.

That victory was the culmination of a longer than expected journey to the big show, but now that he’s here, the 30-year-old is keeping this monumental turn in his career in perspective. In other words, it’s business as usual when it comes to the nuts and bolts of preparing for a fight. 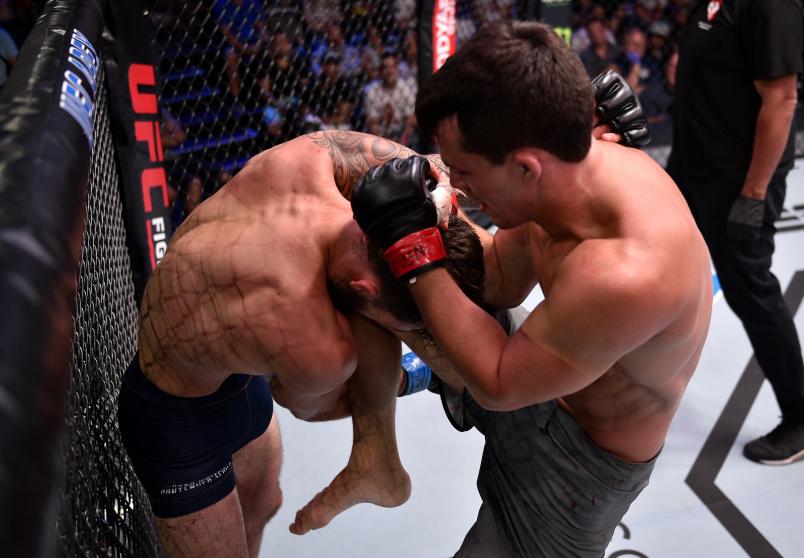 “The training doesn’t really feel different,” he said. “Of course, I’m trying to do as much as I’ve done before, but I’m not doing as many private lessons. I still do a few, but not as many. I would say the biggest difference is all the outside stuff. I’m working with different sponsors and new sponsors, which is always good, but it’s a lot of work. I’m also doing a lot more interviews, and making t-shirts and figuring out the ticket situation. So it feels a lot like the other camps, it’s just that there’s a lot more stuff going on, and I’ve asked for it, so I’m excited.”

Quarantillo is also sticking to his usual tradition of supplementing his training at home in Tampa with some out of town work. This time, it was a few days in Long Island to work with his longtime teammate (and fellow UFC fighter) Matt Frevola and the Serra-Longo squad.

“We have a great camp at Gracie Tampa South,” he said. “Real incredible sparring and some high-level pro fighters, but if I can go somewhere for the training camp, I like to. I’ve gone to Team Alpha Male, I’ve gone to Longo’s before, and I’ve even trained in Buffalo a little bit to get some work in. So I like getting different looks, you get that nervous energy of not really knowing the people you’re sparring with, and of course in New York and at Team Alpha Male, there are so many high-level guys.”

If Quarantillo sounds like he has it all together, that would be accurate, a testament to nearly seven years as a pro as well as the stint on TUF 22 under the tutelage of UFC Hall of Famer Urijah Faber. It was in the reality show fishbowl that Quarantillo realized the importance of being able to tell your story.

“Some of it was from Urijah, who is a great mentor, great person and great fighter,” he said. “But I think a lot of it was the camera. We were doing interviews non-stop, so talking to the camera and listening to myself talk, I think everyone hates listening to themselves talk (Laughs), but it makes a huge difference. It’s like anything in life, the more reps you get, the better you get at it.”

That goes for fighting, as well, but Quarantillo still had a bit of a learning curve to navigate after being eliminated from the show by Saul Rogers.

“I think I had a chip on my shoulder after The Ultimate Fighter,” said the Buffalo native. “Winning one fight and getting so close to having that UFC opportunity, that lifelong dream, I almost had a sense of entitlement, like they owed me. ‘Oh, I was so close, I deserved to be there,’ and then I won my next fight. I beat Marc Stevens pretty convincingly, and then the next fight I think I got a little too ahead of myself and took a guy kind of lightly.”

That guy, future UFC fighter Michel Quinones, stopped Quarantillo at 2:51 of the first round in their April 2016 bout.

“That one really hit me hard,” he said. “I was so close right before, and then losing to Quinones, it was like, ‘Oh man, not again.’ With that loss I knew it was gonna take some big wins to get back in there and I knew I had to start taking people out and basically separating myself from these regional fighters.”

After a decision win over Matt DiMarcantonio five months after the Quinones bout, Quarantillo delivered on his words, knocking out three straight opponents before doing the same thing to Kirk on the Contender Series. He’s a UFC fighter now, and he plans on sticking around for a while.

“I made it my goal to take people out, train my ass off, outwork everyone and now I’m here and I finally get my chance,” he said. “I’m stoked, I’m not taking anyone lightly and I’m all-in and ready to get this win.”