“I think very seriously about the UFC and matchmaking, you’ve got to know your enemy and who you’re competing against." - Luke Barnatt is mapping out his route to the top 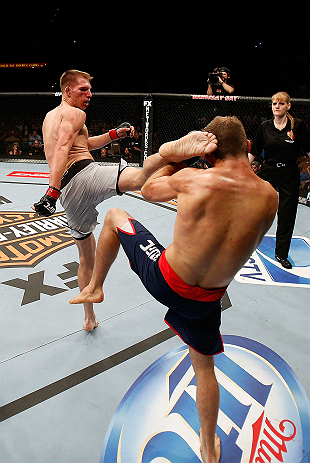 English middleweight Luke Barnatt keeps a mental map that plots his route to the upper echelons of the UFC®’s 185-pound division, and currently his destination goes by the name of Francis Carmont.

Barnatt, who emerged as a rising star from season 17 of The Ultimate Fighter®, is keen to build on his debut victory over Collin Hart, which elevated his pro MMA record to 6-0. At the age of 25 and having only trained MMA full-time for two-and-a-half years, the 6’ 6” Brit now intends to make a swift rise through the middleweight ranks.
Nicknamed “The Bigslow” (a nickname derived from the fact “my team-mates said I was big and slow”), one of Barnatt’s favourite past-times is to play matchmaker – a theoretical Joe Silva if you will. Barnatt is a student of the sport, dedicated to keeping across his entire division in order to “know your enemy”.

Unofficially – and certainly without any influence from Silva – he sees French middleweight Carmont as the pinnacle of his two-year plan. Carmont sits just outside the UFC’s top-ten rankings and Barnatt wants to follow his path towards stardom, which means starting with Chris Camozzi – the first opponent Carmont defeated in the UFC.

“To get there I look at who he beat: Chris Camozzi, Magnus Cedenblad, Karlos Vemola, Tom Lawlor and Lorenz Larkin. Those last two fights I don’t think he won, but he’s 5-0 in the UFC, and I look at that and think if I want to get to where Francis Carmont is, I need to beat the people he beat and I need to beat them more impressively.

“That’s why names like Chris Camozzi come up. If me and Camozzi fought, there’s no way it would go to a decision. We would beat the hell out of each other for 15 minutes, and I think somebody would get dropped.

“I think very seriously about the UFC and matchmaking, you’ve got to know your enemy and who you’re competing against. The likelihood is Chris Camozzi is ranked a lot higher than me, it’s not the smartest fight for the UFC, but the way I see it is that he just took a top-level guy like Jacare [Souza] on short notice, so maybe they give him a lighter fight – which would be me – and I come up like a wolf in sheep’s clothing.”

Barnatt does not know who his next opponent will be, but is hoping he can soon fight on home soil. Having trained with the likes of Chael Sonnen, he has every confidence against wrestlers but admits strikers ultimately bring out the best in him.

“Stylistically any sort of striker is great for me. It depends if you want me to have exciting fights or to win fights. For me to win fights I like to fight wrestlers, but if I fight a stand-up fighter it’s going to be exciting because we’re both going to be standing and punching each other in the face.

“Right now the guy I’ve got my eyes set on is Chris Camozzi. He’s just coming off a loss to Jacare, he’s a stand-up fighter, he’s 6’ 3” so he’s a tall guy like me and I just think it would be a hell of a fight."