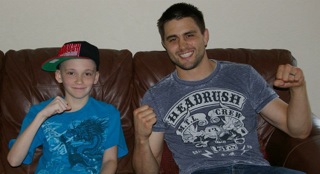 As a student, he’s in the gifted and talented program at school, bringing home straight As on his report card. He loves science, and is fascinated by Stephen Hawking, the renowned British theoretical physicist who suffers from amyotrophic lateral sclerosis (ALS), more commonly known as Lou Gehrig’s Disease.

He’s on the swim team at school, and played one year of football before declaring, “You know, that was fun, but I’m not doing that again.” He also likes martial arts, having started taking aikido not too long ago.

Outside of the classroom and sports, Max is kind and generous. This past Christmas, after seeing a Toys for Tots commercial on television, he brought all his video games to the local GameStop, sold them, and then donated the money to the local Toys for Tots campaign.

“He said that he thinks that’s the worst thing there could be: for a kid to wake up and not have any presents on Christmas,” said his mom, Michelle Hiler.

On Easter Sunday of this year, Max had a headache.

He’d had them before, off and on over the last few months, but never anything too bad. He’d been to see his family practitioner in the past, but there were no signs that there was anything to be worried about.

As the day wore on, Max’s headache turned into a migraine, so his mom decided to take him to the emergency room, hoping to get a shot to help the pain subside.

“They did a CAT scan when we were there, and within hours we were at a Children’s Hospital in San Antonio having emergency surgery on his brain to install the shunt — a ventriculoperitoneal shunt or VP shunt,” explained Ms. Hiler.

Doctors discovered Max has what is known as a pineal teratoma, a rare tumor that develops in the pineal region of the brain, just above the brain stem.

The non-cancerous tumor is caused by the continued growth of stem cells during gestation.

“It’s just something he’s born with,” continued Mr. Hiler. “Certain stem cells that were supposed to shut off didn’t shut off, so they start growing. They’re just cells that don’t get the message to shut off, and because it’s not cancerous, it doesn’t respond to radiation or chemotherapy.”

Max is scheduled to have surgery on at Christus Santa Rosa Children’s Hospital in San Antonio, Texas on Monday.

On Friday, Max had an unexpected visitor, as interim UFC welterweight champion Carlos Condit made the trip to San Antonio to spend the afternoon with this incredible 12-year-old boy who truly embodies what it means to be a fighter.

“For today, to have Mr. Condit just call us and say, `Hey, I’m on my way. I’d like to meet Max’ was amazing,” said Ms. Hiler. “To have somebody just drop what they’re doing — their whole schedule for the day — and take a flight out to meet somebody they’ve never met before, it really meant a lot. And I know it did to Max too.”

“(Carlos Condit) is a great ambassador for the sport,” added Sean Hiler, choking back tears. “Everything he does… he’s just an amazing individual. He’s just an incredibly… incredibly kind and generous man.

“I sent an email to him thinking that maybe he’d send an autographed picture or maybe a card or something; I never actually expected that he would come here. I was driving back from Houston, and my wife sent me a text saying `Carlos Condit is on his way to the house.’ I just about wrecked my truck I was so shocked by it.

“Everything has happened so fast, and for Carlos to see that need, and to have that compassion to just drop everything, and come see Max… I can’t even put it into words.”

As it turns out, Max and the former WEC welterweight champion have a lot in common, spending the 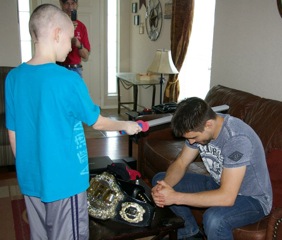 afternoon hanging out on the couch, talking about their mutual affinity for science documentaries, martial arts, and dogs. Condit was also made an honorary knight in The Royal Council of Bald Men.

“Max had to have his head shaved for the surgery, so he has this club that he’s started called The Royal Council of Bald Men,” explained Sean Hiler. “All the guys in the family and a lot of our friends have all shaved our heads in solidarity, and Max has this little foam sword, and he knights us all, accepting us into The Order. We’ve got a picture of him knighting Carlos and giving him an honorary membership into The Royal Council of Bald Men.”

“We received a letter from his dad, just telling us his situation,” Condit said Friday on his way back from San Antonio. “There was the option to send him a video or send him a shirt or something, but I decided to go out and visit him, and it was great.

“I feel like I’ve been blessed to do what I do for a living, and if I can act — it was great visiting Max and his family, and I’m glad I went.”

“It was just amazing listening to he and Max talk to each other,” said Sean Hiler. “Just how much they had in common — things that they enjoyed, and similarities with things that Max likes. He brought his belt, and Max got to take his picture holding his belt around his waist. 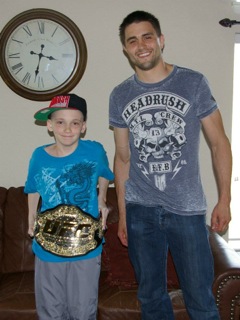 “I posted on Facebook that the UFC belt that he has is bigger and heavier than you can imagine; you pick that thing up, and it is so heavy,” chuckled Mr. Hiler. “But the belt that Carlos deserves for just being such a great human being… is too big for most men to be able to lift, and he wears it easily.”

Though he’s been feeling better since having the shunt installed on Easter Sunday, Max has to head back to the hospital on Monday for a lengthy surgery, where the doctors hope to be able to excise the tumor if possible.

“Their plan is to just go in and do a biopsy just to see what the tumor is for sure,” explained Mr. Hiler, “but the neurosurgeon, Dr. Mancuso, said that she believes it is probably a teratoma.

“(Max has) named his tumor Voldemort,” he continued. For the scant few who might have missed out on the entire Harry Potter phenomenon, Lord Voldemort is the arch-enemy of the young wizard with the lightning bolt scar on his forehead. “He’s scared, but he wants to get it over with; he wants to kill Voldemort.”

“He told me (Thursday) that he can’t wait for Monday to get here, and that he’s terrified that Monday will get here,” recalled Ms. Hiler. “He wants to get it over with and be done with it, but at the same time, he’s afraid. I told him, `That’s okay. I’m afraid too.’”

Despite the severity of his condition, Max’s parents say the bright, young future astronomer has maintained a positive outlook, his curiosity focused on the incredible amount of support and attention he’s received over the last month.

That’s what makes you so special, Max.

Here’s a video of Max from Friday, put together by his science teacher (and favorite teacher), “Coach” Jimmy Bryant: http://www.youtube.com/watch?v=Xr92_DiVbu4&feature=colike