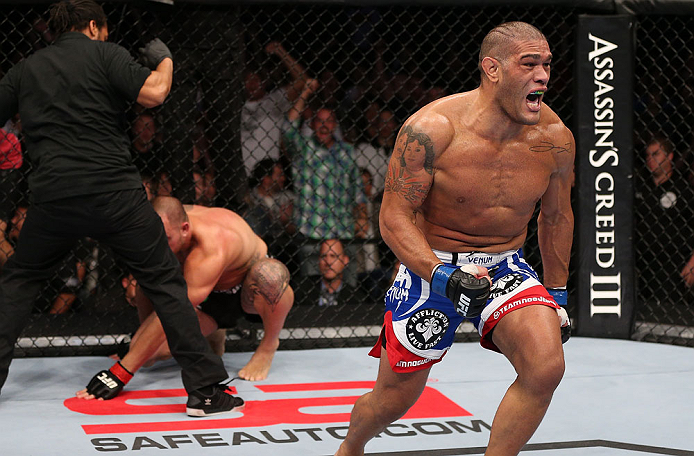 When you’re 33 years old with nearly eight years as a professional mixed martial artist under your belt, it’s likely that you are who you are when the bell rings on fight night. Antonio “Bigfoot” Silva doesn’t buy into that logic.

“UFC fans have not seen my best yet,” said the heavyweight contender. “I’m improving every day, I’m correcting my mistakes and I’m looking to improve everything.”

That attitude allowed Silva to rebound from a devastating May 2012 defeat against Cain Velasquez and roar back to hand rising star Travis Browne his first pro loss last October. To have such a wide swing in success within a five month span was nothing short of spectacular, as well as a testament to the Brazilian’s talent and positive outlook.

Now all he needs to do is repeat the performance he delivered in the Browne fight against an even more imposing foe this weekend at UFC 156: former Strikeforce heavyweight champion Alistair Overeem.

Why would he? Sure, Overeem is an imposing figure, both physically and reputation wise, but Silva’s resume includes the names Tom Erikson, Ricco Rodriguez, Fabricio Werdum, Andrei Arlovski, Daniel Cormier, Velasquez, Browne, and Fedor Emelianenko. It was in the Emelianenko fight in February of 2011 that Silva announced his arrival among the elite, and his second round TKO win made it clear that there is no mountain that can’t be climbed if you have the talent and desire to climb it. The next mountain is Overeem.

“Overeem will see the best of Bigfoot,” said Silva. “Not only can I defeat Overeem, I will beat Overeem. I don’t care about the title shot now. My focus is on Alistair and I want to fight him. I waited for this fight for two years and my focus is 100% on him. After February 2, I’ll think about other fights.”

In many ways, this is Antonio Silva’s title fight. If he loses, then the Browne win will be seen as a fluke, and he will have lost three of his last four bouts. If he emerges victorious, it won’t be enough to get him a return match with Velasquez, but it could possibly put him one win away, and that’s good enough for him at the moment.

“For me, everything is at stake in this fight,” said Silva. “This fight will put me among the UFC’s elite.”