Bigfoot Silva: Ready for Round Six 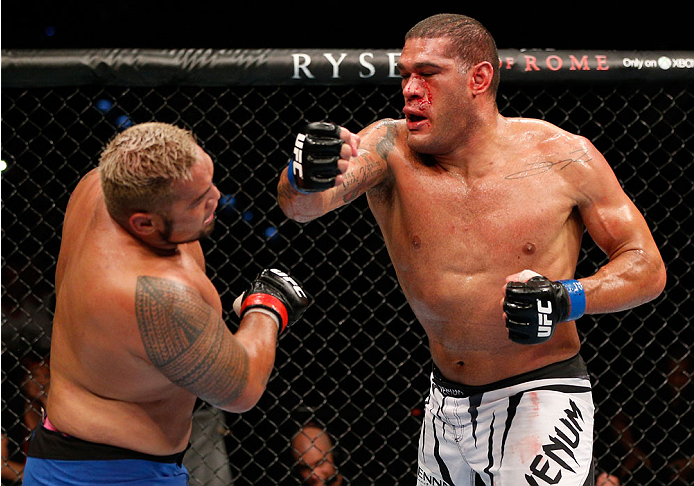 In a rarity for a prizefight, the accolades for the first bout between Antonio “Bigfoot” Silva and Mark Hunt in December of 2013 began while the two heavyweights were still trading leather in the Octagon.

It was the kind of fight that forced you to call your friends to make sure they were watching, and when it was over, you felt drained. Not drained because you fought and took punches and kicks for 25 minutes, but because you were so tense for each of those minutes, wondering who would fall first.

Neither fighter fell that night in Brisbane, and while a draw verdict was rendered, the stock of both men shot through the roof. So despite taking five rounds of punishment and then having to travel back home from Australia, Silva still looks back at the fight with fond memories.

“The first fight was amazing and everybody liked the fight,” he said. “I liked it too.”

He pauses, then changes his opinion. Like isn’t good enough for Silva-Hunt I.

“I loved the fight and I want to try and do the same fight as the last one.”

If the two veterans can produce half of what they did the last time when they meet again this Saturday at UFC 193 in Melbourne, Australia, it will probably be good enough to earn it some more Heavyweight Fight of the Century kudos. But you have to wonder can they do it one more time like they did nearly two years ago.

Silva thinks they can, but this time he expects a definitive ending.

“This time I don’t want to put the result in the judges’ hands and I’m going to do my best to finish the fight before the third round,” he said.

Bold words, but given the paths the two have taken since that epic first meeting, a finish does seem to be in the cards for one of them.

The 38-year-old Hunt has gone 1-2 since his first fight with Silva, getting stopped in his last two bouts by Fabricio Werdum and Stipe Miocic. Silva, 36, failed his post-fight drug test for elevated levels of testosterone, and then was stopped in back-to-back fights himself by Andrei Arlovski and Frank Mir. The difference here is that in his most recent match against Soa Palelei in August, Bigfoot set his ship back on course with a second-round TKO win.

“That was very important for me because before the Soa fight I lost two fights, and I was out from the heavyweight top ten,” Silva said. “And when I fought Soa Palelei, I had the opportunity to come back as one of the top UFC heavyweights. That’s my place. So my mind for the fight was very good, my conditioning was very good, and for me, everything was on that fight. I needed to win, I wanted to win, and I was going to win. I didn’t think about another bad result for me.”

And he’s not about to start now. Working with a stellar group at American Top Team in Florida, Silva feels as if he’s got another run at the title left in him, and while it started with the Palelei fight, it continues this weekend against Hunt.

“I’m training very hard and I’ve got a good team at American Top Team,” he said. “Steve Mocco, Junior Dos Santos, Cara de Sapato (Antonio Carlos Junior). I have a lot of big guys, good guys, striking guys, wrestling and jiu-jitsu guys, and I’m training very serious. I’m not a kid. I’m 36 years old, and I know that it’s my time to do my best and prepare for another title shot. I’m ready to fight, I’m ready to win, and I’m going to win this fight for sure.”

Mark Hunt may have something to say about that, but while he respects his foe, he expects to speak louder with his fists come fight night.

“I expect a tough fight because Mark Hunt is a tough guy,” Silva said. “I respect him a lot, but I want to prove to myself and prove to the world that I can win. I think this fight’s gonna be crazy again. We are going to the sixth round now. We finished five rounds, now we start the sixth.”