"There will be a lot of emotions because I have never fought with the crowd cheering for me. This will be the first time." - Antonio "Bigfoot" Silva 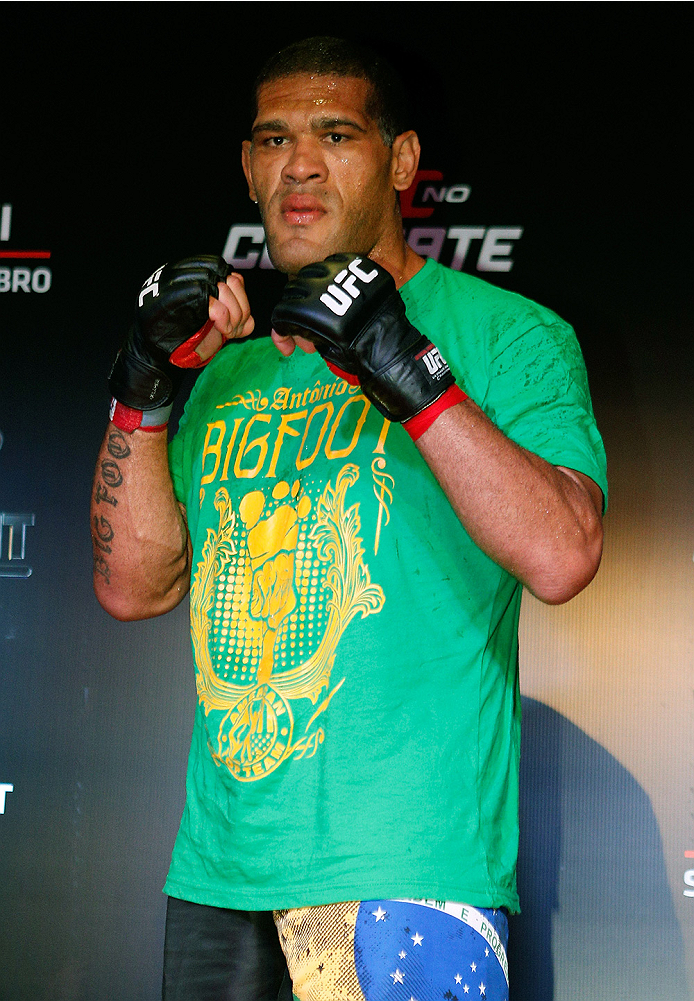 The first time Antonio “Bigfoot” Silva faced Andrei Arlovski in 2010, he recalls the emotion he felt like it was yesterday.

“I remember I was very nervous,” he smiles.

Heading into the rematch with “The Pit Bull” on Saturday in Brasilia, Brazil, the hometown favorite isn’t nervous anymore. In fact, after beating Arlovski via unanimous decision in that first bout in Strikeforce and going on to become one of the top heavyweight contenders in the UFC, his confidence is sky-high. But there will still be some emotions floating around in his head and stomach before the fight because remarkably, this will be the first time he fights not only in his hometown, but in his home country.

“There will be a lot of emotions because I have never fought with the crowd cheering for me,” he said. “This will be the first time.”

For over nine years, Silva has been taking his show everywhere but home to pursue his career as a mixed martial artist. Starting in England and going through Japan, Canada, Australia, and the United States, the soon to be 35-year-old has been a road warrior of the highest order, and he’s learned to deal with being the out of towner.

Most recently, Bigfoot traveled to Brisbane in Australia to face the ultra-popular Mark Hunt, and what followed was an epic five-rounder that saw each heavyweight go beyond their limits in search of victory. It may have been the best heavyweight fight of the last five years, if not ever, and while the draw result was overturned for Silva due to a positive post-fight test for elevated levels of testosterone, the bout remains a highlight of Bigfoot’s career.

“I am very proud because I made the fight I always dreamed to do, a battle that lasted five rounds,” Silva said, but simply calling it a battle doesn’t do it justice. This was sanctioned combat at its most visceral and compelling level, and while Silva didn’t know he and Hunt were making history during those 25 minutes, he certainly knew that he was in a fight.

“The emotions were very intense,” he recalled. “I really wanted to win and I thought of that every single minute of the fight, but I had no idea that we were putting on such a great show for the fans that were watching.”

Following the bout, Silva said he “didn’t do anything for two weeks to have my body recover,” and with his subsequent nine-month suspension for the positive post-fight test, he’s had plenty of time to wait for his next bout. It was time well spent, even if it wasn’t the ideal situation.

“It was very hard for me, but the positive side of it was that I was able to heal the old injuries,” he said.

And now that he’s back, he gets another high-profile opponent in a main event in his hometown. It may have been a long time coming for this, but he’s not complaining.

“Everything has its moment and the right time to happen,” Silva said. “I am very happy to fight in Brazil at this moment of my career. I will give the best of me to end this fight with a win and celebrate my birthday, which will be on September 14th.”

Getting a second win over Arlovski, who he describes as “a great striker and a very experienced fighter,” will be a nice birthday present, but Silva wants more, and he hopes that his ultimate prize will be a second crack at the UFC heavyweight title.

“It (a win over Arlovski) would put me one step ahead and I believe that with one more win after that I will show that I’m ready for the title shot again.”