A Big Leap For Mariya Agapova

It’s the cliché of all clichés, but when you say what a difference a year makes when talking about UFC flyweight Mariya Agapova, nothing could be more accurate.

At this time in 2019, Agapova was still in her home country of Kazakhstan, preparing for a July 30 fight against Tracy Cortez on Dana White’s Contender Series. Agapova was the perfect candidate for the series, 6-0 as a pro in MMA after a long run as a boxer that saw her earn a spot on the National team.

But the opportunities weren’t there for the Pavlodar native, and though being passed up for World Championship and Olympic team spots was bad enough, seeing her pay drop over and over was the final straw. So it was off to MMA.

“I think I learned very fast,” said Agapova. “In the beginning it was hard learning wrestling, and my wrestling wasn't really good. It was hard, but now I can do it pretty well and I know to keep learning.”

Her ability to learn on the job got her on the UFC radar, and after she got the call for the Contender Series bout, manager Alex Davis made sure she got some reps in at the American Top Team gym in South Florida. It was helpful, but there just wasn’t enough time to get Agapova’s wrestling up to the level required to beat Cortez. Still, it was a competitive fight when Agapova could keep it standing, not that it was any consolation to her when she lost a unanimous decision while Cortez got a UFC contract.

“I was upset and I think it was wrong what happened,” she said. “(I thought) They have to give me a second chance. I deserve more, I can do more. I did not want to come back to my city, to my country. I wanted to stay and show everybody that I can do more than I showed in the Contender fight.” 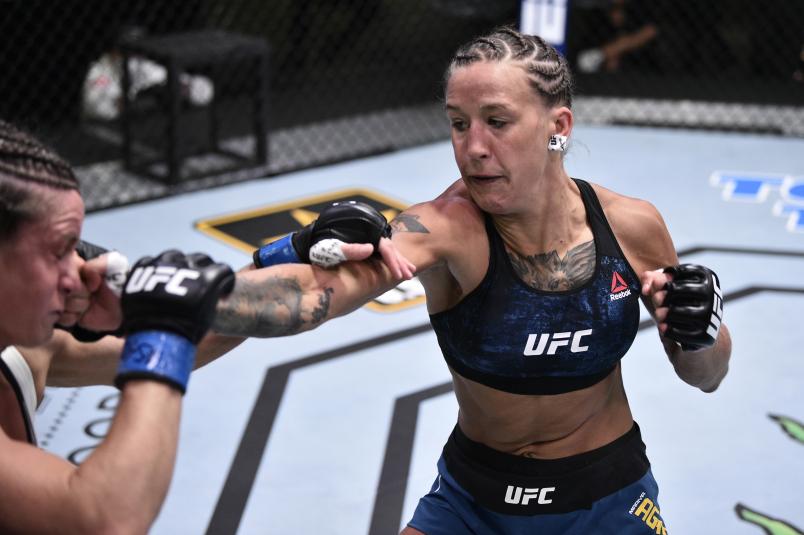 That was a little less than a year ago. Today, Agapova is not just a member of the UFC roster, but after a Performance of the Night submission of Hannah Cifers in her Octagon debut on June 13, she may have already turned into your favorite fighter. And don’t worry, if that’s the case, you’re not alone.

“After the fight, I got a lot of followers,” said Agapova. “Even after my fight, I was walking in Vegas and people said, "Oh I love you, can I take a picture?' (Laughs) It was weird because it's happened to me in Kazakhstan, but when I came to America, people don't know me. And now people know me, even in America.”

Even more people will know her in the future, because the 23-year-old has that spark, that love of combat that compels you to watch. It’s that same intangible that her ATT teammate Joanna Jedrzejczyk has, where it’s not a sporting event, but a fight, and as much of a joy as it is to see that, Agapova was even happier when she was throwing hands with Cifers.

“I enjoy it,” she said. “On Contenders, I didn't really enjoy it because a lot of pressure was on me from my ex-teammates, from everybody, because it was my first time on the high level, and I paid attention to this pressure. But this time, I just tried to stay away from it; I didn't even go on the internet and check what people wrote me because I didn't want to feel this pressure. I just enjoyed my time, enjoyed every minute of what I do, and enjoyed being in Vegas. And when I went into the Octagon, I enjoyed that too and tried to give people my energy, and everybody felt it that night and enjoyed what I did.”

Expected to back in action later this summer, Agapova hopes to bring more enjoyment to fight fans as often as she can, a welcome development for her if she has her way.

“If I can fight, why not?” said Agapova, and about now is the right time to fill in the blanks from the Cortez fight to the present. Remember, she was without a UFC contract after her lone pro loss, but she was quickly scooped up by Invicta FC. Oh yeah, and she was relocating to the United States, despite having no friends or family here and not being able to speak English.

And for the record, her English is better than that of some folks who were born here.

“It's getting better every day.”

So is her fight game, with that being evident in the two Invicta fights she had before signing with the UFC. Submitting Alexa Conners and stopping Marilia Santos, both in the first round, last year, there really was no other place for her to go than the UFC. And now that she’s here, she’s planning on sticking around for a while.

“I'm really proud of myself and I'm really glad that I did it,” she said of moving to the States. “And I'll keep going. It's only the beginning. I will be the best in the world and I will work for it.”