"I’m one of those guys who likes to put it all on the line because when you do that, the risk and reward are amplified." - Roy Nelson 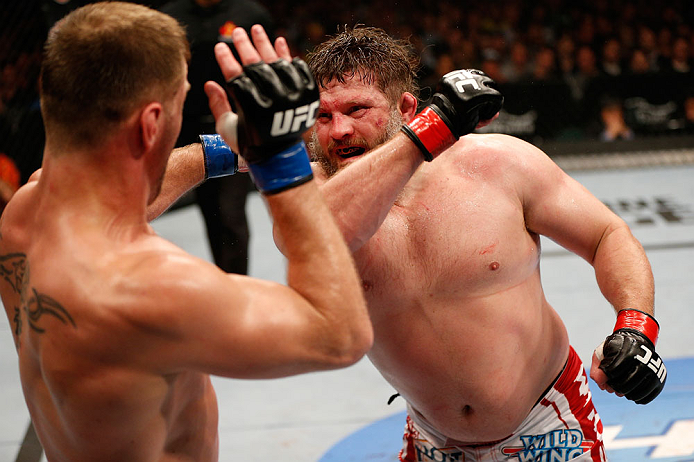 Setbacks are a common hurdle in the realm of combat sports. Over the course of a long training camp, a fighter dances with injury on a daily basis as they prepare to put their skills to the test inside the Octagon. Depending on how things play out on fight night, the grind to sharpen their talent results in a payoff where their profile is elevated, or a step backward where the efforts to regain momentum must be doubled.

Nevertheless, even when a setback is dealt, it can be the perfect set up for a triumphant comeback, and heavyweight Roy Nelson has his sights set on making 2014 that kind of year. The Ultimate Fighter season 10 winner will face legendary heavyweight Antonio Rodrigo “Minotauro” Nogueira this Friday in Abu Dhabi, where he will be looking to put the brakes on two-fight skid.

While “Big Country” will be looking to get back into the win column, there is more than just a potential victory on the line. The Las Vegas native is eager to close the book on a rough chapter in his career where he dropped back-to-back fights against Stipe Miocic and Daniel Cormier, and get to writing the next great installment - one he intends to kick off against the former PRIDE champion.

Nelson sees the main event matchup as one of the biggest opportunities of his career, and he’s honored to trade leather with an opponent who has amassed such a storied career the way Nogueira has.

“I think it’s awesome to fight the only heavyweight to ever win the PRIDE and UFC championships,” Nelson said. “He’s the only one to ever hold both titles, which really says something. I think it’s awesome to stand in the same cage as him. Anyone who has ever beat Nogueira in the UFC has either earned a title shot or is one step away from getting an opportunity to fight for that belt.

“As an athlete you want to test yourself against guys who are considered legends of the sport. It’s actually kind of strange considering how long we’ve been around the sport that we’ve never sparred or trained together. That’s kind of weird since we’ve both been around the sport for a long time. Had we sparred or trained together I would have some sort of idea how I stack up against him. Those things give you an indication of where you are at compared to the best in the world, and since I’ve never had that experience with him, I’m really looking forward to getting out there with Nogueira. I always want to test myself against the best in the world and he’s a legend for a reason.”

Throughout Nelson’s career he’s faced a collection of the best heavyweight fighters to ever step inside the cage, and Nogueira certainly has the credentials to qualify for that list. “Big Nog” has accrued one of the most dynamic resumes in the history of MMA and has developed a reputation for having an abundance of heart once the scrap goes to deep waters.

The Brazilian submission ace has struggled with injury over the past several years, but due to the perseverance Nogueira has shown throughout his career, Nelson isn’t discounting his opponent’s abilities in the slightest. The 36-year-old is a well-versed veteran in his own right and has a keen understanding of the grit it takes to compete at the highest level of the sport for as long as Nogueira has.

“I’m a fighter who always puts on exciting fights. Whether I’m in there for 15 or 25 minutes, you are going to watch every second of it because you don’t know what is going to happen. That’s the beauty of MMA. You have to watch from start to finish, but there are some fights where doing that is painful. That’s not the case when I fight and I think that’s one of the reasons the fans have shown me so much support. I come out there to finish and it could happen at any time. “

As Nelson and Nogueira have been trading leather with the opposition for more than a decade, the sport around them has continued to change. Where the primary motivation for fighters was once finishing the man across from them in any fashion that presented itself, the current era of the sport has brought a new wave of fighter who favors efficiency over excitement.

While obtaining the victory is the ultimate goal by every measure, there is still something to be said for the breed of fighter who steps into the cage looking for the finish. Both Nelson and Nogueira are cut from the same mold, where they step into the Octagon looking to get down to business, and that is precisely the type of fight the former IFL champion is expecting this weekend in Abu Dhabi.

“Some of these newer fighters look at this like it is going out and working for 15 or 25 minutes,” Nelson said. “They don’t see it as a fight. They aren’t trying to finish because the truth of the matter is they can’t. A lot of different athletes have a different meaning or measure for what they call heart. I judge it by a fighter’s willingness to leave it all out there like it’s life or death inside that cage. I’m talking about fighting like it matters, and not just trying to squeak by on the judges’ scorecards.

“‘Throwback’ is the term you hear used about that fighting style but I don’t see it that way. I think ‘legend’ is the right way to describe it because that fighting mentality made MMA the fastest growing sport in the world. I’m one of those guys who likes to put it all on the line because when you do that, the risk and reward are amplified. But I’m a fighter and not one of these guys who tries to wait around for the right opportunity or pad their record. I’ve always been the guy who isn’t going to turn down a fight. I’m the guy who thinks if we fight 100 times, I bet I’m going to beat you 99 of them.”