Big Country Back in Business with KO Win

Owner of perhaps the most potent right hand in the heavyweight division, Roy Nelson’s power was the difference once again in his UFC Fight Night main event against Antonio Rodrigo “Minotauro” Nogueira on Friday, as he knocked the Brazilian legend out in the first round at the du Arena in Abu Dhabi.

“He’s a legend,” said Nelson of Nogueira, the only man to hold the PRIDE and UFC heavyweight titles. “If it wasn’t for him, we wouldn’t be fighting in MMA.”

Nelson was gracious in victory, but despite his turning the attention toward Nogueira, the night belonged to the 37-year-old “Big Country,” who snapped his two fight losing streak in the only way he knows how – by knockout. Now he’s got even bigger game in mind.

“I want to fight for the belt,” said Nelson when asked his future plans. “Let me start right there.”

Nogueira tried to close the gap on Nelson as the bout began, but a right uppercut followed by an overhand right sent the Brazilian to the canvas. Nogueira got back to his feet quickly, but he went on the defensive as he got his legs back under him. Midway through the round, Nogueira’s head was clear as he resumed his earlier strategy, but with two minutes left, another huge right hand put “Minotauro” on the deck. Nogueira rose to his feet on wobbly legs, and Nelson calmly stalked until a final right resulted in another knockdown, this one wisely bringing in referee Leon Roberts to stop the fight at 3:37 of the opening stanza.

Clay Guida got a much needed win after his August loss to Chad Mendes, scoring an impressive three round unanimous decision victory over Japan’s Tatsuya Kawajiri.

It looked like it might be an early finish for Guida, as “The Carpenter” landed with a looping right hand 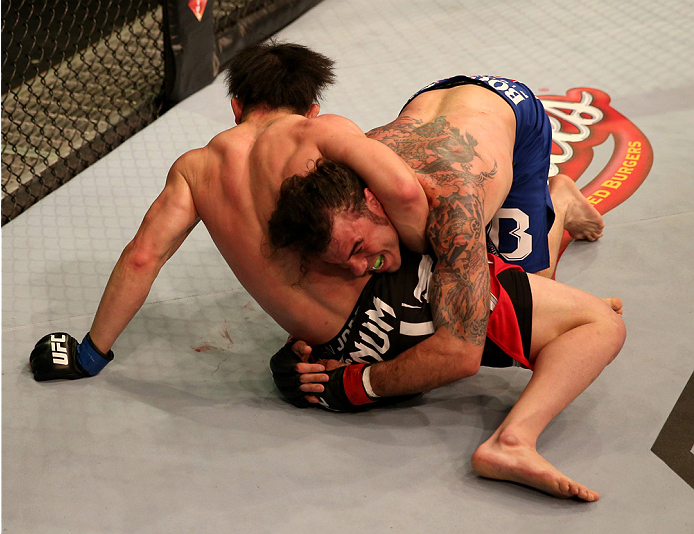 that sent Kawajiri hard to the mat. The Ibaraki native quickly cleared his head as Guida took his back, and as the two scramble to the mat, Kawajiri locked his opponent’s arm up. Guida slammed Kawajiri and was able to fight free moments later, again taking Kawajiri’s back as the two locked up against the fence. With little over two minutes remaining, Guida slammed Kawajiri to the mat, but the Japanese veteran wouldn’t let go of his foe’s arm. Eventually, the two broke, and this time it was Kawajiri with the slam as Guida worked for the arm just before the bell.

The high-level action continued in round two, with Kawajiri trying to lock up a kimura again as Guida tried to put him on his back. Guida did secure two quick takedowns, but he wasn’t able to do anything with them against the defensively sound and busy Kawajiri.

Guida put on a clinic in the third round, avoiding all offensive attempts from Kawajiri and firing off enough strikes – as well as a takedown – of his own, to wrap up the victory.

The wrestling of Ryan LaFlare was too much for John Howard, as he drilled out a three round unanimous decision win over “Doomsday” in their welterweight bout.

LaFlare (11-0) took no chances with Howard’s stand-up attack, putting “Doomsday” on his back in the first minute of the bout. Quickly passing Howard’s guard, LaFlare worked for a choke, but Howard (22-9) was able to escape and get upright. LaFlare bulled Howard to the fence before getting another takedown, but again, Howard got loose, subsequently letting his hands go for the first time. LaFlare’s knees and southpaw jab were working well though, and he used both until the end of the round.

Howard’s left hook struck fast and hard as round two began, jarring LaFlare. The Boston native scored with a takedown seconds later, and the two traded reversals before resuming the stand-up battle. A low knee by LaFlare brought a halt to the action, and despite being in obvious pain and taking four of the allotted five minutes to recover, Howard decided to continue. When the bout resumed, LaFlare scored a takedown, but Howard got back to his feet. LaFlare kept matters going at close range though, bulling Howard to the fence. In the final 30 seconds, Howard showed signs of life with a nice flurry of punches that got LaFlare’s attention.

Trying to keep his late second round momentum going, Howard went on the attack, only to get put on the deck moments later. When the two stood, Howard landed with a solid left hook, drawing a roar from the crowd, but LaFlare was taking the bombs well, and on the ground, Howard had few answers outside of a brief kneebar attempt that came up empty.

Fighting in the Middle East for the first time was an emotional voyage for Palestinian-American Ramsey Nijem, and the lightweight prospect delivered in a big way, handing Iran native Beneil Dariush his first pro defeat via first round TKO. 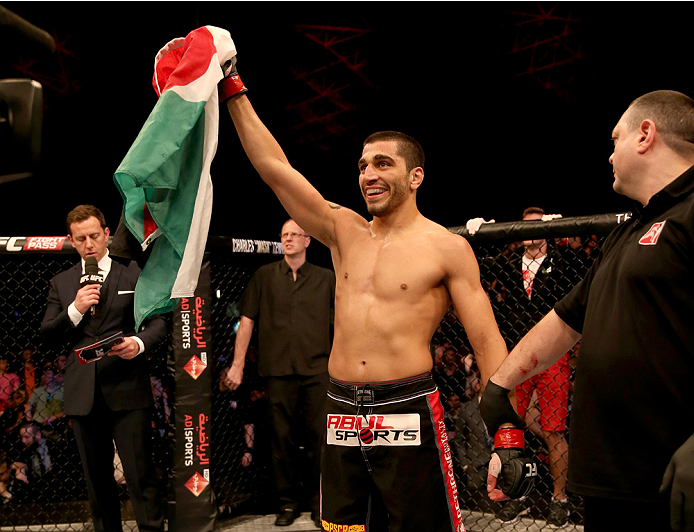 Nijem went after Dariush at the opening bell, only to eat a flush left to the face in return. A left kick to the body followed, but Nijem was able to use it to put his foe on the mat briefly. A minute and a half in, Dariush came up short with a takedown but was able to lock Nijem up against the fence briefly. Nijem went on to make Dariush pay for keeping his hands down though, as he dropped his foe to the mat with a left hook and went on to do anything in his power to finish, whether it was a guillotine choke or ground and pound. Finally, a series of unanswered strikes brought in referee Neil Hall to stop the fight at 4:20 of the first round.