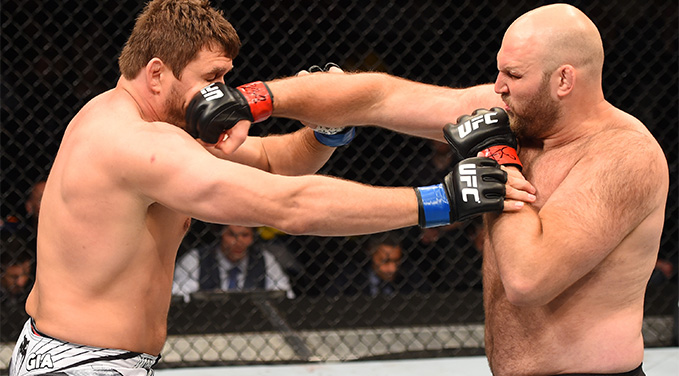 The ninth-ranked heavyweight in the world, Ben Rothwell, made short work of the 13th-ranked Matt Mitrione in the UFC Fight Night co-main event at the Smoothie King Center in New Orleans on Saturday night, winning by submission in under two minutes.

The win was the third straight for Kenosha’s Rothwell, now 35-9; Mitrione, who saw a three-fight losing streak snapped, falls to 9-4.

Mitrione tried to use his footwork to open up Rothwell’s defenses, but it was Kenosha’s Big Ben who landed the first jarring blow, a hard right to the head. Surprisingly, Mitrione looked for a takedown moments later, but after Rothwell threw off the attempt, he sunk in a choke and Mitrione was forced to tap out in seconds, the end coming at 1:54. 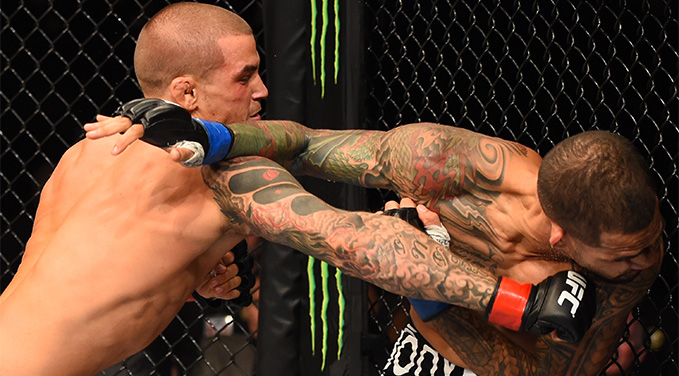 In his first bout in Louisiana since March of 2010, Lafayette’s Dustin Poirier thrilled his home state fans with an impressive first-round knockout of Yancy Medeiros, making it two for two at 155 pounds for the former featherweight contender.

“It was incredible,” Poirier said. “I felt the crowd while I was walking out, I knew I’d have them on my side – they’re bayou people, that’s the way we are. I knew Yancy was going to be rangy, but he really didn’t have good head movement, I expected him to be a little bit more slick out there, he was moving in all the wrong ways. I thought I’d sink a choke in and submit him, but when I landed that body kick I knew I had him. He’s a tough dude though, I hit him harder than I’ve ever hit anyone in my life and he still wouldn’t go down.”

Medeiros looked relaxed as the bout began, maybe too relaxed, as Poirier knocked him down twice, first with a right and then with a left. The Hawaiian was able to survive, and Poirier stayed cool, opting to then take the bout to the mat. After a spell on the canvas, the two rose, and Poirier rocked Medeiros again, this time with a left kick to the body. “The Diamond” moved in for the finish, and he got it, with an unanswered barrage of shots prompting referee John McCarthy to stop the fight. The official time was 2:38.

“Nothing surprised me, I expected everything he did out there,” Medeiros said. “He caught me with a great body shot and the ref stopped it before I could recover. Dustin is an awesome guy, he’s a class act, a standup dude and I’ve got nothing but respect for him.” 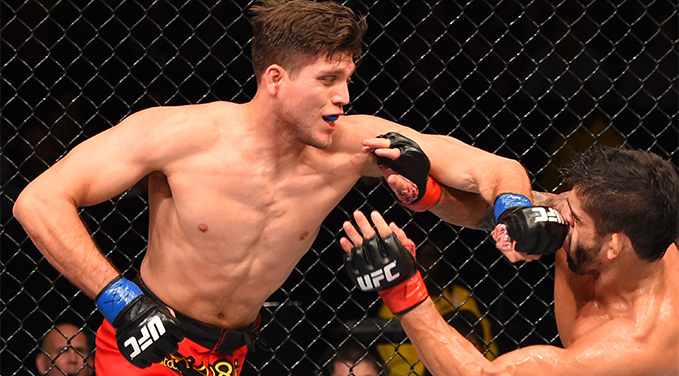 Featherweights Brian Ortega and Thiago Tavares engaged in a bloody and punishing war that thrilled fans in NOLA, with hot prospect Ortega finally breaking through to stop the veteran contender in the third and final round.

The bout went to the mat almost immediately, with Tavares landing ground strikes while Ortega sought submissions from the bottom position. While the two battled, Ortega swept his way into the mount position, opening up the now bloodied Tavares in the process. Tavares took some hard shots but then reversed position again, controlling matters against the fence before the two broke. Tavares did get a takedown before the round ended, a good way to go back to his corner.

Ortega dropped Tavares with a spinning back elbow early in round two, but it was the Brazilian who took the top position on the mat and proceeded to score with ground strikes. Remarkably, Ortega weathered the storm and got out of trouble long enough to avoid the finish, but Tavares maintained control for the rest of the round.

After the Octagonside physician checked out the cut on Tavares’ forehead and allowed the bout to continue, the third round began with a roar from the crowd, and Ortega scored well while standing. A low knee by Tavares brought a momentary halt to the bout, but when the action resumed, it was Ortega keeping his offensive output high. Tavares looked for another takedown, but after not getting it, Ortega knocked the Brazilian’s mouthpiece out. Tavares fired back hard once his mouthpiece was replaced, but with a minute left, Ortega dropped Tavares hard and then finished him off with a series of strikes that brought in Dan Miragliotta to stop the bout at 4:10 of the final frame.

“I feel like we were in a crazy war,” Ortega said. “I'm ready to go home and see my family and my kids. We put up a big fight. Obviously, I was on the bottom, so I had to adjust and get used to that situation and make the best out of it from there – which were elbows and feet. I had to try to catch submissions. It wasn't very close, he was beating me by points, but that last minute means everything. I know I have to work on my wrestling. It's three five-minute rounds, and you have to fight all of it. I don't really remember the finish. He kneed me and that hurt, but I saw that he was tired. I knew that was my chance to get him. Rock 'em, sock 'em, baby. I’m in this game, and I want to prove I belong. I'm going to get back in the gym as soon as I get home and work on what I need to work on and keep coming back.” 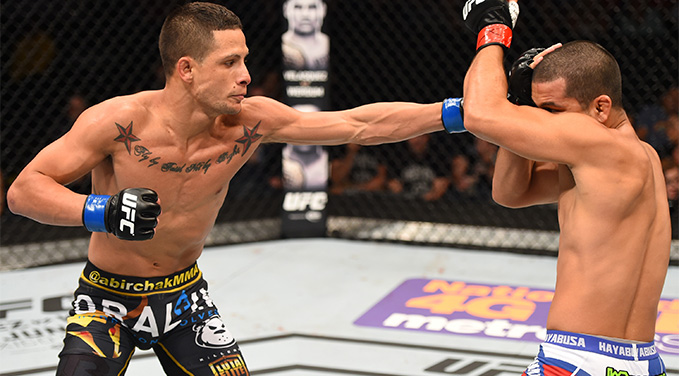 Nine months after they were originally supposed to meet, Anthony Birchak faced off with Joe Soto and it was Tucson’s Birchak who made the most of the opportunity, taking less than a round to knock Soto out in their bantamweight bout.

“This is literally a dream come true,” Birchak said. “The fight pretty much lived up to my expectations. I wanted to come in and really lay my hands on him. My coach said, anytime you put your hands on someone - try to make them dizzy. I wanted to make him dizzy. This is something I just want to do right here, be a bull and come forward. Joe Soto was a world champion, he's fought for gold, so I trained for a champion basically. He brought the best out of me. I’m on cloud nine right now.”

Coming out fast, Birchak (12-2) fought as if he wasn’t going to be denied, and he wasn’t. A right hand dropped Soto (15-4) early on, and while the Californian appeared to recover, as the two rose, Birchak pounced, landing a variety of unanswered shots until Soto fell to the mat, with referee John McCarthy stopping the bout at 1:37 of the first round.

“I remember him ducking in under my left hook,” Birchak said. “As he came out, I threw my right, and I caught him right on the button and he dropped. Once I saw he recovered, he got me in heel hook position, so I made sure I got out quickly and got back in, I finished up with some solid punches. I started out just submitting people, my first five fights were all finished by submissions. I realized my weakness was striking, so I worked on that and started knocking people out. These strikes weren’t an accident. I really want to be in the top 15. I know I can compete with any of those guys, and I know I’m a good matchup for any of them up there.”

The two were scheduled to fight at UFC 177 last August, but Soto was elevated to the main event against bantamweight champion TJ Dillashaw when Renan Barao fell ill on weigh-in day. 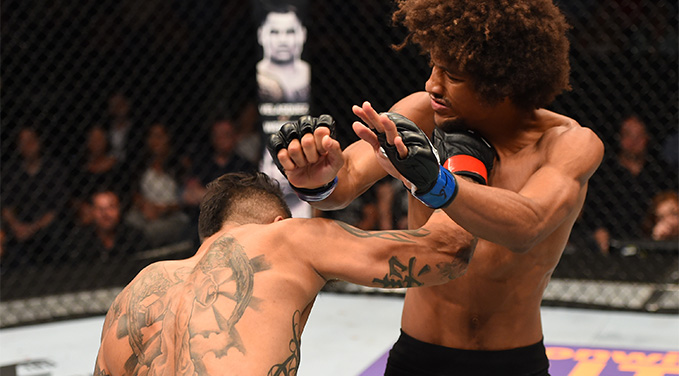 Francisco Rivera caught Alex Caceres early in their bantamweight bout and he didn’t let “Bruce Leeroy” off the hook, ending the fight via knockout in just 21 seconds.

Caceres took the fight to Rivera from the outset, which proved to be the wrong move against a knockout puncher like the number 11-ranked Rivera, who drilled the former Ultimate Fighter competitor with a left hook that dropped him to the canvas. California’s Rivera followed his foe to the mat, with a few unanswered shots bringing in referee Dan Miragliotta to halt the fight.

“I'm really emotional right now,” Rivera said. “Being hurt in camp made things hard, but more importantly, my mom moved back to Arizona so I didn't have a full-time babysitter. I haven't seen in my kids in weeks, and I cry every night. This is the first time I've gone this long without seeing them. I just really, really needed this. You have no idea.”