Bid on Boots for a Good Cause

Combat Boots and Auction, including rare UFC memorabilia and
experiences, will raise funds for rehabilitation center for wounded
soldiers 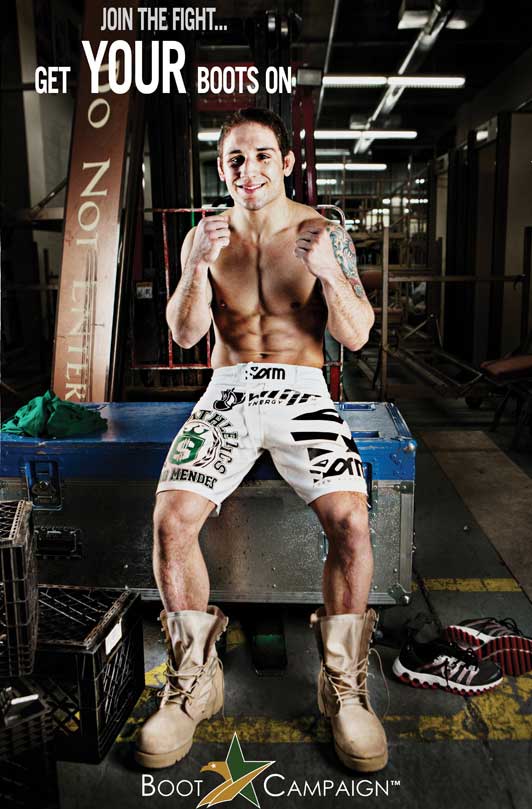 Las Vegas, NV -- The Ultimate Fighting Championship® announced today that it will partner with Texas-based the Boot Campaign to launch a fundraising effort benefiting the Lone Survivor Foundation. UFC® fans are encouraged to “get YOUR boots on” by purchasing The Boot Campaign’s signature “give back” combat boots and apparel at www.BootCampaign.com/UFC , with proceeds benefiting the Lone Survivor Foundation.  Fans purchasing “give back” combat boots will be granted free admission to the UFC 130 after-party on May 28 at XS Nightclub at Encore Hotel and Casino in Las Vegas.

In support of the Lone Survivor Foundation, the UFC is offering fans the chance to bid on rare UFC memorabilia made available to the public for the first time. Items signed by UFC superstars such as Royce Gracie, Chuck Liddell, Cain Velasquez, Georges St-Pierre, Jake Shields and Jon Jones will be included. In addition, the auction will feature a limited-edition UFC Octagon Book (411 out of 600), the Octagon canvas from UFC 129, one-on-one training with UFC fighters, as well as VIP fan experiences and tickets to upcoming UFC events. Beginning May 18, the online auction will be held at UFC.com/boots and give fans an opportunity to raise money for military servicemen and women injured while in the line of duty. The auction will run through UFC® 130 on May 28 and all donations received will fund the construction of the Lone Survivor Foundation’s Veteran Ranch in Texas.

Founded by retired Navy SEAL Marcus Luttrell, the Lone Survivor Foundation welcomes home, empowers and restores American wounded warriors and their families. Luttrell, author of the #1 New York Times Best-Seller, Lone Survivor, was inspired to build the center after his own recovery post-combat at his ranch in Texas. Luttrell envisioned a facility as a unique place of healing for soldiers recovering from physical wounds and emotional trauma suffered during combat. 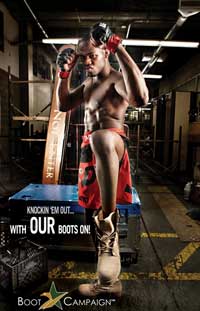 The ranch, while still a medical facility, would offer a non-clinical environment designed to offer soldiers and their families an integrated, holistic approach to recovery.  Located on over 1,000 acres, the ranch will house up to 15 families a week.  The foundation intends to build three other facilities throughout the U.S. in the future.

“The UFC is pleased to partner with the Boot Campaign and the Lone Survivor Foundation as we continue to find ways to support the men and women of our armed forces,” Lorenzo Fertitta, Chairman and CEO of UFC, said.

“Marcus Luttrell is an inspirational hero and we are more than willing to assist him as he creates facilities that will aid in the recovery of our returning servicemen and women.”

“It brings me great pride to unite two of my passions -- the UFC and supporting our wounded warriors,” Luttrell said. “The UFC is making it possible to achieve our goal of bringing awareness to the service and sacrifice of our military. I hope all UFC fans will be inspired to join the fight and help our troops when they come home.”

To bid on prizes and for more information on the UFC’s Boot Campaign, please visit UFC.com/boots.