No matter what happens in the future, Arjan Singh Bhullar won’t likely forget the last 12 months. It was the year he debuted in the UFC, represented two nations, became a pioneer and, most importantly, became a father.

“It was phenomenal,” said Bhullar, who defeated Luis Henrique in his Octagon debut last September in his home country of Canada, becoming the first Sikh and Indo-Canadian fighter to fight in the UFC. Needless to say, India was watching. “Being the first for anything is always special and all those fans out there now have somebody they can rally behind. They’re so hungry to get an event out that way. The WWE gets out there, but it’s not the same thing. You have some crossover fans, but the hardcore MMA fans are like, ‘Now there’s hope that they’ll come out this way.’ There’s a lot of love and support and it’s great to see.”

So what does the 31-year-old do for an encore? He’ll start with a fight in Glendale this weekend that will see him face fellow heavyweight prospect Adam Wieczorek. It’s a big fight for the 7-0 Bhullar in terms of his move up the divisional ladder, but just like the Henrique bout, it has added significance, this time because he will enter the Octagon wearing a traditional Sikh turban, and on the holiday Vaisakhi, no less.

“Everything happens for a reason,” he said. “And it’s pretty cool that I’m gonna be able to do that and do it on an Indian holiday that’s going to be celebrated worldwide. It’s almost like a storybook kind of story.”

The turban he wears on Saturday will have special meaning as well.

“It’s something a champion athlete wears, where they have it hanging off one shoulder,” he said. “It’s going to be exciting.”

It’s also a symbol of pride and never forgetting his roots.

“I’ve been raised where I know my story as a family, as a community here, and the struggles that we’ve had to get established,” Bhullar explains. “For me to be in the place I’m at, many people have sacrificed and it is important for me to honor that sacrifice and this is how I do it. And it’s my identity. My mom would hit me upside the head and say, ‘Don’t ever forget where you come from.’ (Laughs) I’ve always been raised as such, and when you become something, you make sure you give back. Because if you can’t help your own, who else are you going to rely on? It starts with us and I’m excited to be able to do that.” 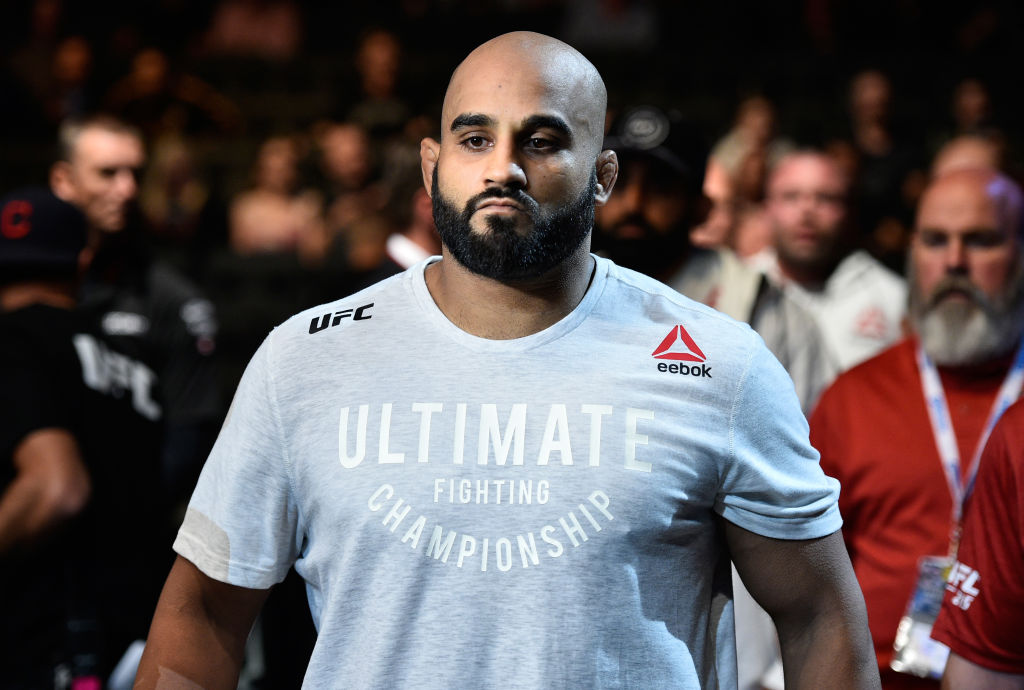 Bhullar isn’t in an easy position with all this swirling around him, but he makes it look like another day in the office. Even though he has a nation watching his every move and an opponent looking to punch him in the face, there’s a grace and ease to him, something evident in his first UFC bout against Henrique, where the first-time UFC jitters were apparently nowhere to be found.

“I was comfortable,” he said of the three-round unanimous decision win. “I do a lot of mental training and I put myself in that position hundreds of times before I actually step in there. And I’m very grateful. It’s tough to have jitters if you’re grateful. You can’t have both of those emotions at the same time. And nerves will never take me over because this is a choice for me. I don’t have to do this, I choose to do it, and I choose to have fun when I do it.”

And while the level of attention on him hasn’t dipped, at least the first fight is out of the way, so now he can really focus on the next step, which is chasing championship gold.

“I’m always chasing gold,” said the 2012 Canadian Olympic wrestler. “You might get more eyeballs and more attention as the career progresses, and that’s great, but I have people close to me that keep it real with me, and I’m pretty level headed. I focus on what’s most important. None of the other stuff matters unless you win and I know that.”

After everything else, all that’s left for him is to win.