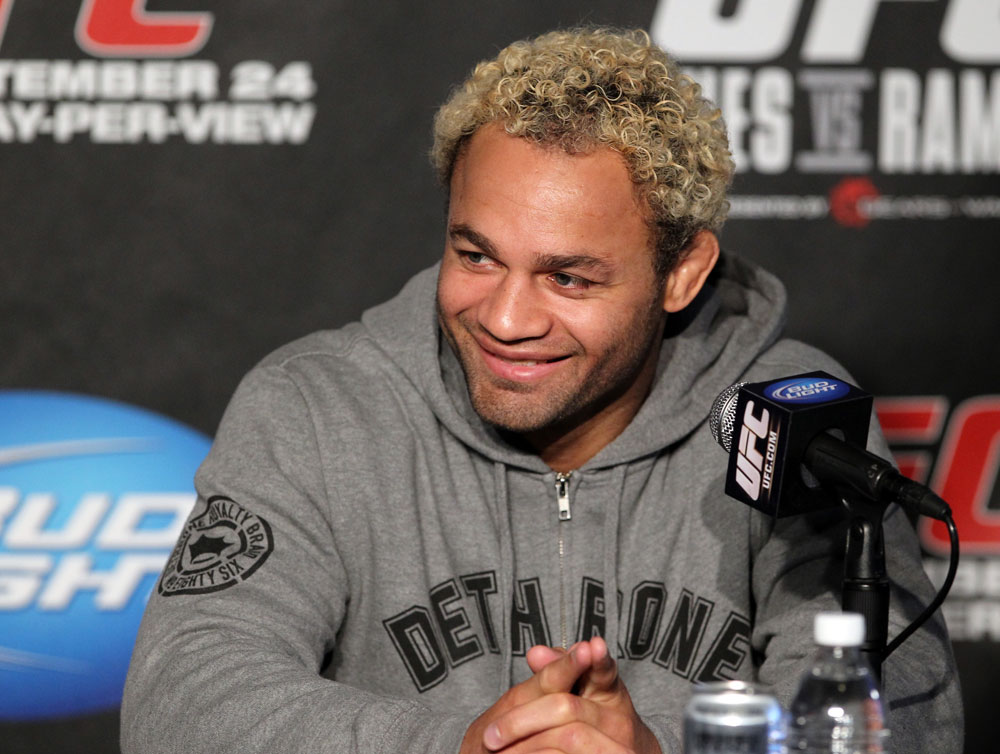 There are plenty of fans who wouldn’t think of sending a Christmas card to Josh Koscheck. Whether it’s his confidence, his smack talk, or his ability to poke and prod potential opponents until they’re tempted to punch him in the mouth for free, the welterweight contender is, shall we say, a polarizing figure.

But if there’s one undeniable fact about “Kos,” it’s that he’s a true fighter, one of those anyone, anytime, anywhere guys. But even he went above and beyond the call of duty last December in Montreal, when his championship rematch against welterweight boss Georges St-Pierre went sour early thanks to a broken orbital socket and plate that he suffered in the first round.

He still had four more to go. But he gritted his teeth through the pain and fought all 25 minutes against the best 170-pound fighter in the world. The result, a five round decision win for St-Pierre, may have been a foregone conclusion after the injury, but the lasting image of the bout was Koscheck’s courage in defeat.

“I had no other choice,” said Koscheck of his decision to fight on. “Us as fighters, we go and we want to fight no matter what. I felt that if I could just get one good one on his chin, I felt like I could put him to sleep. But it was a tough fight. My depth perception was way off. I remember at one point, I took a shot and I wasn’t even close to him. He was like ten feet to the left. (Laughs) But it is what it is, and I just tried to grind out the fight.”

When it was over, he didn’t just have a loss to deal with in what was probably going to be his last welterweight title shot for a while, but also the painful injury that only got worse after the adrenalin rush of the fight wore off.

“It was definitely a horrible injury,” he said. “I remember being in the hospital begging for morphine. It would wear off and I’d be like ‘hey nurse,’ – I’d track down anybody I could ‘hey guys, can you shoot me up again? The pain’s coming back.’”

He can joke about it now, the usual reaction from a fighter after the injuries heal and he’s able to move on, train, and be normal again. So the answer is no surprise when you ask whether he ever questioned his vocation after the worst injury of his 22 fight pro MMA career.

“Not at all,” said Koscheck. “I’m not one to just sit back and think negatively about my life and what I’m doing. Obviously I’m doing this for a reason. I don’t know what the reason is yet (laughs), but God has put me in this position, I’m here, I’m fighting, and it’s an opportunity for me to provide for myself and my future family. So right now I’m just gonna do what I gotta do, continue investing in properties after every fight, and keep putting my money away so that someday, I can say I had a nice, good run, I had a lot of fun doing this, and now I gotta look at the next chapter in my life.”

Don’t get the rocking chair out for the 33-year old Koscheck just yet. Yes, the injury has kept him sidelined for all of 2011 thus far, but that doesn’t mean he just sat around waiting. For the first time in a long time, he got to refresh his mind and live like the regular folks for a bit.

“I definitely got to do a lot of things that I haven’t got to do in a while,” he said. “With having this much time off, it was kind of nice. I got to focus on spending time at my house, actually drive my car around for a while, and just get to do things that you don’t usually get to do because you’re so focused on training and fighting. It was a nice layoff, that’s for sure. It got me revived a little bit.”

As soon as he got the green light from his doctor to resume training though, he was back in the gym and ready for whatever the UFC was going to throw at him. He even made it clear that he was prepared to step up to the middleweight division if that’s where the fights were.

“I keep my weight pretty much around 190,” he said. “I don’t usually get too much heavier than that. Even though I had to take a lot of time off after the St-Pierre fight, I never let myself get out of hand. I was looking to go to 185 because I wanted bigger fights, I wanted bigger names, and I just wanted to come back and have a good opponent on my comeback.”

He got one, and at welterweight to boot, as an injury to Diego Sanchez brought a phone call for Kos to step in to face UFC Hall of Famer Matt Hughes in this Saturday’s UFC 135 co-main event in Denver. Short notice? No problem.

“I prefer to not have long training camps,” said Koscheck. “Training camps suck. (Laughs) I’m in shape all year round and I’m ready to fight, so why not just put it in overdrive for a couple weeks and fight? I’m just looking for fights. I don’t think I have too much longer in the sport. I’ll be turning 34 this year, and I just want to have big fights from here on out, fight bigger names and Matt Hughes was an opportunity where the UFC needed somebody to fill in and I felt that it was a great opportunity for me. I’m already in great shape, so why not take the fight?”

Why not, indeed. And the fact that Koscheck has been looking for a fight against the pride of Hillsboro, Illinois just adds to the motivation factor.

“When he was on top, it was said that he wouldn’t give any of the AKA guys (Koscheck, Jon Fitch, Mike Swick) a shot at him,” said Koscheck. “He didn’t want to give us an opportunity and he called us all kids and was totally disrespectful. But this isn’t a personal fight, this is just a fight that the fans wanted to see for a long time, and now we’re getting the opportunity to do it.”

And though Koscheck expects a fight from the 170-pound legend, he doesn’t expect to leave Colorado with a loss either.

“Everybody’s dangerous when it comes time to fight,” he said. “This guy (Hughes) has been training for a long time for Diego Sanchez, and I think everybody can be dangerous. In the sense of getting knocked out by Matt Hughes, I don’t think that’s gonna happen, but I definitely think he has the potential to get a submission or takedowns, so he’s definitely a dangerous fighter and I’m taking him very seriously. I’m going to have a great gameplan for this fight, I just have to stick to the gameplan, and I should come out a winner.”